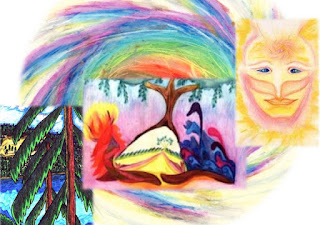 An Ascension Portal is a name for the transition from the third dimension and into the higher dimensions. The Arcturians, who are unknown to many third dimensional humans, are one of the "Guardians of the Ascension Portals."
Fortunately, more and more third dimensional humans are beginning to awaken to the "possible reality" that humans can ascend. However, what does an ascension mean?
When one ascends, their third dimensional being begins to transmute into higher and higher frequencies. As the human, or other being, begins the Ascension Process, they can more and more see the Light around all that they perceive.
On the other hand, if that person, place, situation, or even thing, lowers the frequency of Light, their aura does not cast out the Light around that person, place, situation, or thing.
If there is no light to be seen, then it is likely that the one who experiences that person, place, situation, or thing may not be able to believe that they can perceive that frequency of light, OR the Light is either too high for that person to be able to perceive.
If one is prepared to go through an Ascension Portal they must first be able to perceive it. An Ascension Portal resonates to a very high frequency which is too high for most third dimensional humans, and or other beings.
It is for that reason that many beings who have seemed to ascend are first surrounded by an intense light. Of course, there are not many humans who are prepared to even think about, much less even know, what an Ascension is.
An ascension is very complex, but to give it a more simple explanation, an ascension is when a beings frequency of vibration becomes so high that those with the usual human third dimensional vibration will not even see that Ascended Being.
Then, since they cannot see the Ascending Being, they do not know that the Ascension process is even happening.
It is for this reason that, "Ascended Masters" often seem to disappear to those who's consciousness is not high enough to be able to perceive the transition from at third dimensional person, place, situation or thing, to a higher dimensional person, place, situation or thing.
There are also stories of Ascending Beings disappearing, however those beings are still there, but they are now resonating to such a high frequency of light that only those who resonate to that frequency will be able to perceive what is really happening.
Of course, most people have not heard much about ascension and therefore they do not think about it. However, sometimes a human has an experience that awakens their innate ability to perceive higher frequencies of light.
These are the "Awakening Ascended Masters," that we may hear about. One must resonate to a very high frequency of light in order to be an Ascended Master, but there has been these Masters throughout our human history.
Quite often, Ascended Masters, only stay on third dimensional Earth for a shorter time than third dimensional humans. This is often because they have come to "teach" and not just give a way.
In fact, Ascended Masters do not tend to stay in their third dimensional form for until they have completed the reason why they have chosen to come to Gaia's Earth to assist the people, and very importantly, the Planet, to move through a difficult time of transmutation into a higher frequency of Love and Light.
Therefore, many of the Ascended Masters come to Gaia's assistance when the humans have been doing too much damage to Gaia's Planetary SELF.
When these Ascended Masters have completed their reason for taking a third dimensional body, they Ascend back into their innate Higher Dimensional frequency of SELF.
The third dimensional humans usually think that that being "died," but in reality it has likely just gone Home to their Higher Dimensional planet and/or reality.
Then, the third dimensional beings usually think that that Being has died, when in fact, that being has finished its job for Gaia and is going home for a rest.
The Arcturians are one of those Higher Dimensional Beings who come to Earth when it is necessary and then return Home, which may look like they "died," when in reality they have ascended back to their Higher Dimensional Home world.
Dear Higher Dimensional Beings, thank you so for your assistance!
Posted by Suzanne Lie at 11:28 AM