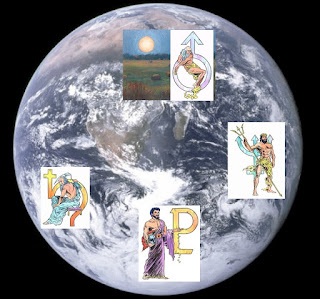 The Harvest Moon (full moon for September) of 9-29-12, highlighted the very powerful astrological aspect of Pluto in Capricorn, squaring (90-degree angle) Uranus, which was conjunct (within 10 degree) with the full Moon. If any of you got a chance to go outside and see the full moon last night, you know how brilliant and glorious she was.

Pluto is the planet of transmutation of matter into Spirit, and Uranus is the planet of act NOW to choose to create your life OR be the victim. When the energy of transmutation (Pluto) aspects Uranus (choose or be chosen) from a 90-degree angle (our blind side) it is fortunate to have the full Moon lighting our way. In fact, this Moon was the Harvest Moon. So, what do we want to harvest?

When the energy of transmutation (Pluto) aspects the energy of our highest state of consciousness (Uranus) at a 90-degree angle, it is much like a rogue wave in the deep ocean. Uranus, our Ship on the ocean, is suddenly hit by this rouge wave from the side because the Captain of that Ship was not paying attention, OR the alert Captain sees the rogue wave and turns the Ship to confront the wave of immense energy straight on.

Fortunately, the Full Moon is directly on Uranus, the Ship, to give the Captain clear visibility of the oncoming challenge. What does that Captain choose to DO? Does the Captain bemoan his/her awful fate, or does the Captain decide that he/she must act NOW!

Energy merging at a 120-degree angle has the greatest opportunity to stabilize a situation and to allow the Captain of the Ship, who is also confronting the rogue wave—hopefully head on, to trust everything that he/she has learned from the long journey across the tumultuous seas of Ascending Earth.

Saturn has been touring the oceans of Libra for about two and a half years to learn about relationships with all life, and is now moving into the fiery seas of Scorpio. Hopefully, the Captain of this Ship has learned how to relate to life because that life will be changing due to the transmuting powers the energy field of Scorpio.

Saturn has been trying to teach our dear Captain that the responsibility of choice is the only freedom from the victimization of a “surprise” return of the very energies that were once sent out. Hopefully, the Captain has gained some Mastery of his/her energy, because Scorpio is a fickle Sea and changes her mind instantly and without any warning.

What will our Captain DO? Will he/she bemoan the horrid plight of the onslaught of transmutation, whether or not he/she is ready? Or, will our brave warrior of a Captain gather all that has been learned from a long journey through the Sea of Discontent and CHOOSE to directly confront the onslaught of immense transmutation with the Wisdom, Power and Love that has been gained and remembered through the long and lonely journey?

Does the Captain know that a beautiful world of unconditional love and innocent peace lies just beyond the huge wave this is surging the small Ship? Will our brave Captain give up in the final moment because the journey has been too long and his/her power has been drained by the drudgeries of daily duties and boring repetitions?

We can see that our Captain is exhausted from the long journey and beaten down by disappointment and mundane duties of no consequence other than to fill another’s pocketbook. What can we say to this Captain? How can we tell him or her that the journey is almost over? Can the Captain hear our call, or has he/she become deaf to hope and blind to choice?

NO! We will not abandon the Captain. We will NOT abandon our SELF. We have come through a very long and exceedingly dark time of the closing of the Kali Yuga. We CANNOT give up now! We cannot give into the brainwashing and desperation of the mundane duties of a reality that is closing.

On the other hand, Saturn, who is leaving Libra and moving into Scorpio, is telling us that WE are the Captains of our Ship. Therefore, we must CHOOSE to release that which pulls us down into the mire of forgetfulness and take the responsibility of being the Master of our Energy. Hence, confronting our karmic relationships with others (Libra) has shifted into the opportunity to transmute our energy field into its higher expression (Scorpio).
Neptune, the God of the oceans of our life, is returning Home to Pisces after its 165 year orbit of the Sun. Since 1847 the humans of Earth have waged 529 wars, AKA “military conflicts.” (http://en.wikipedia.org/wiki/List_of_ongoing_military_conflicts)  In fact, 30 wars are ongoing at this time. When will “we the people of Earth” learn to live in peace? Likely, the answer is – NEVER.
World peace at this frequency of resonance and within the third/fourth dimensional consciousness of humanity does not seem to be possible. Neptune has shown us that in his last tour of the Sun. As Neptune, the ruler of the Oceans returns Home to Pisces, he says, “Peace can only be found within!” However, finding peace and living in peace is a very different matter, for the separation and fear of the third/fourth dimension has brainwashed us to be robots to duty and servants to “others.”
Saturn trine (120-degrees) Neptune says, “It takes personal responsibility for our energy fields in order for us to go Home.” Neptune is the role model for us returning to innate energy field of love and light, and Saturn tells us that we have spent the last 2 ½ years tending to our relationships with others. NOW it is time to transmute the matter of our self (Scorpio) into the spirit of our SELF.
As of October 6, 2012 Saturn leaves Libra and steps into Scorpio (Pluto’s Home) for 2 ½ years. Then Pluto and Saturn will be in “mutual reception,” which means they will be living in each other’s energy field (Home Sign). Hence, Saturn in Scorpio is telling us to roll up our sleeves and do the work (Capricorn) of birthing our new life, by allowing our old life to die.
Hence, Pluto’s energies of transmuting the old (death) into the new (birth) will be working in Unity Consciousness with Saturn’s energy of everything we put out WILL return to us, so PAY ATTENTION. However, to what do we choose to pay attention? Do we want to pay attention to what we should do, or do we want to pay attention to what we love to do.
The decision of “should do” will tie us to that which is over and make us feel like a victim to our environment. The decision of “love to do” will guide us out of what is dying and in to that which is being born. Saturn says that our choice will come back to us and Neptune, which is trine to Saturn, says we will flounder if we do not allow our imagination and spiritual connection to guide us.
Meanwhile, Pluto and Uranus are saying, “Change is us to the new, the light of the full Moon will light our way and protects us from our own fears. Meanwhile, the amplifying energies of Jupiter will be visiting Uranus this year to give us a free boost into the higher states of consciousness.

Will we accept that boost?
Will we act on these energy fields?
Will we turn our Ship into the wave of change and Carpe diem (seize the day)?

Ascension is a CHOICE!