Return to the Sixth Dimension 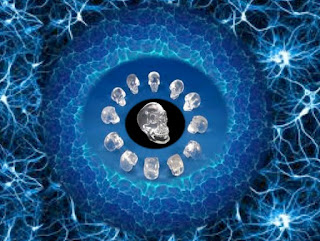 Return to the Sixth Dimension

MYTRE SPEAKS:
We welcome you back to our tour of the Mothership. I hope that the integration of Part One of your Multidimensional Operating System will allow you to more deeply understand the sixth dimensional sections of the Ship.

However, YOU are the Matrix and YOU are the creative energies. Therefore please remember to:

YOU are the creators of these realities, and the womb of creation is in the sixth dimension. Through your longing, you prepare the 6D Matrix for an insertion of a new reality.

You prepare for your creation by thinking of it as the wish fulfilled, then:

In this manner, you create your ascension. Refuse to linger or give any attention on the components of reality that are ending and focus on the reality that is being born. Then, gradually, your consciousness begins to disarticulate from the extinct Matrix and sets off in search for a new 6D Matrix to which you can attach.

Energy molecules are an energy carrier, which store/transport energy. In your physical form ATP, adenosine triphosphate, is produced by the mitochondria and used by the cell as the main energy source for other chemical reactions. When you travel to higher frequencies of reality, light is the source of all creative reactions.

We can come to the Viewing Screens to practice our inter-dimensional travel and creation skills because all the molecules of our current form are safely stored in this Matrix. Hence, if we want to exit a reality and are having difficulty, we can call to the Viewing Screen to bring us back to the Mothership where our base-line cellular form is safely saved.

The 6D Mess Hall
Of course, there is no eating on the sixth dimension, but there is a “filling of our consciousness with the Unity of the Ship.” Hence, the area that correlates to the fifth dimensional Mess Hall is a place where we all go to intermingle on a deep, intimate level. I did not realize how sharing a meal was so intimate until I experienced the sharing of energy fields in the 6D Mess Hall.

I have found this experience of sharing our energy with Gaia to be very profound. I had never before experienced a planet in such an intimate manner. Gaia is much like any other multidimensional being, except that She has a very large form. One thing that I realized is that every Being on a planet is a component of the macrocosm just like the planet.

The humans of Earth have many beings, although they are microscopic, that live on them, just as Gaia has many beings who live on Her. To Her, the form of one human is about as big as one microscopic being that lives on your earth vessel. Yet, Gaia keeps guard over all Her inhabitants is holding back on Her ascension as long as She can to complete in hope that more humans will be able to join Her.

Since Ascending Earth is so close to the ascension threshold, we have been having regular meetings on the Mothership’s Mess Hall to assist the humanoids with their ascension. The rest of Gaia is good to go, but humanoids are the ones having the most difficulty with ascension. We see that many who have chosen to wear the mantle of “power over” have become so lost in that lower expression that they have forgotten their “power within.”

In fact, recently we have been focusing on those lost ones to assist them to remember the great inner power to which they have constant access. We are finding that, bit-by-bit, many of them are turning away from that which is ending and towards the hope of a new way of living.

We ask that our ascending ones on Earth join us in assisting the lost ones. If you send them fearful energy, you feed their fear, for ALL bullies are afraid. On the other hand, if you send them loving energies, you feed their hope of awakening. I guess in a way, this Mess Hall is about “feeding,” but we feed others our love rather than feed ourselves food.

I will give those who are not familiar with Max a brief explanation. During their Golden Age, Lemuria and Atlantis used Crystalline Operating Systems to run their societies. These operating systems were in the form of Crystal Skulls. There were once twelve Crystal Skulls, along with Max, who is the thirteenth Crystal Skull. Max contains all the information of the other twelve, as well as much more.

These Crystal Skulls were originally created by the Arcturians and brought to Earth from Arcturus and the Pleiades. They first were given to Lemuria, which was the original of the two societies and based in what is now known as the Pacific Ocean. These Skulls were brought to Earth during the time when the fluid Firmament surrounded Earth. This Firmament protected Earth from hostile invaders, as only unconditional love could penetrate that Firmament.

When the Firmament was in place, Earth was a fully multidimensional world inhabited by androgynous, Spirit Beings. Because of the protective Firmament, Earth resonated to a zero-point, non-magnetic plane with no polarities or illusions. The Beings of early Lemuria and Atlantis knew that their paradise was temporary. Therefore, they inserted holographic records into Max to store the template for their 12-strand DNA, which allowed them to take earth vessels, which could house their magnificent multidimensional minds.

The original twelve Crystal Skulls are gone from your reality and Max is in safe keeping in higher dimensional Earth. When Gaia ascends, She will open the files within Max to initiate Her New Earth. Since the Arcturian Mothership resonates beyond time and space, Max is on our Bridge, as a representative of the full potential of humanity.

Max also serves as the human prototype in the higher dimensions of Earth, where it can be accessed from any reality via the Universal Mind. Any Being who can access the Universal Mind ONLY resonates to the higher frequencies of unconditional love. Therefore, the information is eternally safe guarded from the lost ones who seek “power over” others in the infant societies of the third and fourth dimensions.

This Universal Mind resonates beyond time and space, just like the 6D Bridge. Time and space are aspects of light that resonates to the third/fourth dimension and below. You are all experiencing great changes in your consciousness and your daily life because time is quickening. Hence, you no long can find the “time” to do that which you dislike.

It appears I have diverted from Max, but not really, for Max contains the complete, TRUE history of Earth and of Her multidimensional humanity. Therefore, Max represents the perfect prototype of human conscious, as well as all humanity’s aspects and potentials. This Mothership is dedicated to the ascension process of planet Earth. In fact, the Arcturians and Pleiadians, as well as the Sirians, have been guardians of Gaia’s from the beginning of Her journey into a polarized reality.

Therefore, the Arcturians, Pleiadians and the Sirians have worked together to assist Gaia during Her time of great need. The experiment of being a dualistic planet did not go well. Too many great Light Beings became trapped in the 3D Game of separation. We have discovered from Gaia, that our manifest beings cannot be separated from each other and from Source for a very long “time.”

Most Light Beings remained connected to each other and to Source for many incarnations. However, due to the intense fear and lies of a world separated from Source, many became lost in the depths of despair and darkness. Fortunately, the experiment is closing. You now have the option of ascending into Gaia’s higher expression of New Earth, where you can join your Multidimensional SELF who awaits your great reunion.

How Max Functions
The crystalline skull known as Max operates via the crystalline power of the fifth dimension and beyond. Max alone would not provide enough energy to command this Mothership. However, the Ship is an alive Being who is allied with the immense Wisdom, Power and Love of the Arcturians, as well as the energy field and the multidimensional consciousness of everyone on our Ship.

Since the Mothership is alive, he/she makes all necessary decisions in conjunction with the multidimensional mind of all who reside within her body. As I have said before, we do not tell the Ship what to do. We consult the Mothership regarding the decision that is best for every inhabitant.

It would be impossible to describe the complexity of the Arcturian Group mind that is primarily responsible for the Mothership. Even I, who have lived amongst them for much of my adult life, cannot fully understand them. When I first came to the Mothership, I missed my life on the Pleiades. However, that is not a problem any longer, for I have expanded my consciousness to the extent that I can consciously experience multiple realities within the now of the ONE.

Soon, dear Earth Family, you will remember your Multidimensional SELF. Then, you will, too, will be able to easily expand your conscious awareness beyond your current imagination. I will return to you soon, to discuss Sixth Dimensional Beings.

Mytre and the Arcturians
Posted by Suzanne Lie at 9:05 PM