Mytre and The Arcturian
Trip to the Mothership Part V 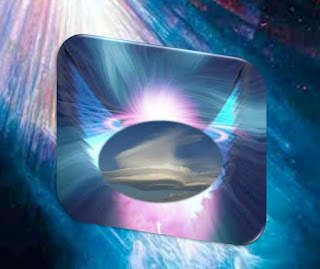 In fact, they have much to do with the Ship being alive. Their sixth dimensional energy field is always moving and enlightening the life force of the entire Mothership, as well as all her inhabitants. The sixth dimension of the Mothership is one of the thresholds between portions of the Ship that hold a definitive form and portions of the Ship that consists of mutable form or exist as pure consciousness.

I had been on the Mothership long enough to have fully acquainted myself with the fifth dimensional areas and was ready to, not just visit the sixth dimension, but actually use its quality of infinite movement to activate a wormhole. My Arcturian Guide led me to yet another entrance to seemingly nothing and nowhere.

I was instructed to release all attachment to my current form. Since, this was my first time through the wormhole, the Arcturian assured me that it would protect my form while I moved beyond the burden of form. In fact, the Arcturian chose to accompany me on my maiden voyage.

This time the lack of form was not as disconcerting, as I had had a while to digest my last sixth dimensional experience. Also, knowing that the flash of light guiding me was the Arcturian was calming, and allowed me to maintain a high enough state of consciousness to stay in the NOW.

Within this loose image of SELF, I was simultaneously ONE within the Collective Consciousness of the Mothership, which I will describe later. Somehow, I had some capability of mind so that I could think “Wormhole.” Before, I could complete the thought of this concept, a huge wormhole opened before me.

We, the Arcturian’s light and my own, were swept into the circular movement of the Wormhole. My consciousness blasted open into an experience, which I could only call euphoria and eternal bliss. We, as any sense of the concept of I was extinct, twisted within these sensations that amplified beyond my ability to put into any sequential format of words.

Unfortunately, or fortunately, because I was loosing all connection to Mytre--whoever that was, we Fell Out of the Journey. Back in my familiar form, I heart the Arcturian say,

Before we, the Arcturians, and I, continue with the discussion of these expanded states of consciousness, the Arcturians will assist you with the next process of downloading your Multidimensional Operating System. We will then take you into the seventh through the twelfth dimensions of the Mothership.

THE ARCTURIANS SPEAK:
Our Beloved Ascending Ones, for we speak to all that may hear.  We are very, very joyous to assist you in integrating your Multidimensional Operating System.  This new operating system is coded to be activated by and to activate the 97% of your unused DNA. This DNA will accept the Multidimensional Operating System that can only be used by the 95% of your brain that has lain like fallow fields which have not been cultivated.

Furthermore, this 95% of your unused brainpower is what connects you to your Multidimensional SELF. We see the joyous vision of the complete awakening of our ascending ones. Your light shine brightly, and as you connect to your true, Multidimensional SELF, this light transmutes into a higher and higher expressions of your beingness.

This transmutation will greatly assist you to perceive, interact with and live within components of your reality that you once had to enter into deep meditation, or do something that you love in order to experience. As each and every one of your cells are fully integrated into the 4th dimensional frequency of your beingness, a great change takes place in your perceptions of reality.

For instance, you will find that it will be much easier for you to ignore that which is ending. Thus, it is simpler to choose to NOT attend to stimulus that lowers your down into anxiety, depression, anger, sadness or fear.

In fact, now you can look to that which is ending and give it the blessing of unconditional love. In fact, right now, take a moment and allow that which is needling upon your brain, wanting your attention, wanting you to turn and to interact and feed it. We ask you now to turn and look this discontent straight in the heart and say,

“I love you, unconditionally, and I blaze the Violet Fire into the emanation that you are sending to me. I bless that you, too, find the peace that I am gaining within my new expanded version of self.”

And now, please turn your attention back to us, so that we can assist you to release your old, 3rd dimensional habits, issues and behaviors:

Release the habits, issues and behaviors of the past NOW…

These experiences of your old self will NOT be taken into New Earth. They are burdensome, cumbersome, and they lower the frequency of your consciousness and impede your ability to fully integrate your Multidimensional Operating System.

As you push them away with your love and transmute them with the Violet Fire, turn to us and say,

Of course, mechanical devices are no longer used, but it is a way for your SELF to interface with your 3rd dimensional brain. In fact, if you desire, you can give your 3rd dimensional brain the image of actually turning the crank and reeling up the anchor, your physical self along with Gaia and everything that is beloved within your physical reality.

Just as your 4th dimensional voice was once your silent voice, now your 3rd dimensional voice will become, is becoming, is now the distant voice that you can almost hear, the vision through the corner of your eye, the sensations that are leaving, the memories that were once real and the illusions that once bound you.

All these third dimensional perceptions are becoming increasingly dim. As these voices, visions, sensations, memories and illusions fade from your awareness, you can better focus on the highest 4th dimensional Self, your I AM Presence. It is in this manner that you can best prepare for your full ascension into your 5th dimension and beyond.

And as you stand upon the Threshold of another expression of your SELF,
See, hear, touch, feel the higher frequencies of light as it enters you…

YOU are now your aura. YOU are now that which was formally perceived as the light around your body.

See an imaginary mirror before you to see your New Body…

YOU are now that light. You are now the ONE that is protecting the remnants of your 3rd dimensional physicality by constantly transmuting that which is ending because of the unconditional love and Violet Fire that YOU are sending it.

Personal and Planetary Ascension has BEGUN!

Blessings BE Our Dear Ascending ONES. You are coming Home.
Your Arcturian Family
Posted by Suzanne Lie at 9:45 PM