HOW Many ASCENDED MASTERS WILL IT TAKE TO SAVE GAIA ?

How many Ascended Masters

Will it TAKE TO SAVE GAIA? 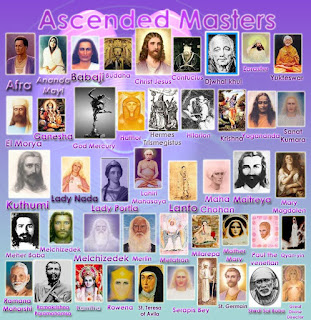 Many Masters have come to Gaia during the many eons to remind the humans that Gaia's Earth is a LIVING BEING! Unfortunately, many humans have forgotten, or never knew, that Gaia was calling them to assist Her with Her Planetary Ascension.

Unfortunately, many the humans on Earth, have long forgotten that the planet, known as Gaia, is a living, loving, knowing being who had promised that She would assist the humans with their process of ascending into the fifth dimensional SELF.

In fact, Gaia's "earthly mission" was to gradually advance into the fifth dimensional expression of Her planetary Self, which would be known by the humans on Earth as " EARTH! "

Earth was such a kind and loving Planetary Being that She offered to allow the very young, and often unaware humans, to live on Her Planetary Body.

This offer from Gaia was to assist the living beings on her planetary body to join Her Planetary Ascension process when IT was the NOW that Gaia would be asked to return from her earthly planetary self to her greater expression of her Galactic SELF!

Unfortunately, many, in fact, too many of the humans on Earth did NOT follow though with their promise to assist Gaia to transmute from Her third dimensional planetary Self into Her fifth dimensional Galactic SELF!

While Gaia was young, Her planet was filled with love and light, as the "primitive" humans cherished and cared for the lovely world that they were able to enjoy.

In fact, these early humans thought of Gaia as their Earth Mother whom they were meant to assist, love, care for and become dedicated to their role of keeping Gaia save healthy, and happy.

Then the "modern" humans came to Gaia. They only thought of Gaia as a "big rock" that had lots of things to eat and as something that they could harm.

In fact, as the humans "evolved" they became very selfish and thought only of what they the humans wanted, without any though of whether or not it would be damaging to dear Gaia.

First the humans took from Gaia without any thought of what would happen to Gaia's Earth, Air, Fires, and Water. In fact, the humans became an enemy of the very planet that had been given to them as place to live.

These humans took from Gaia until the waters were low, fires destroyed much of the land, wars destroyed more of Gaia's Earth, Air and water.

Finally Gaia had to call the Higher Beings who lived on other planets to come to Gaia to teach the humans on Earth how to love their planet that had given them a place to live, water to drink, the way to use fire to cook the food that they found abundant on Gaia's body and water to keep them alive and healthy.

However, the third dimensional humans did NOT care for the planet that had so lovingly invited them to live on Her planetary home.

Instead, too many humans took from Gaia and did NOT assist her in the manner that the "primitive ones" assisted, worshiped and protected dearest Gaia.

The "evolved" humans who only cared for themselves damaged Gaia more and more until the waters were unclear, the sky was filled with smog,  human's fires were not cared for and often destroyed much of Gaia's land and water.

Then the "smog" came into Gaia's air, which was VERY uncomfortable for the humans. However, the earth, air, fire, and water that was greatly damaged by the humans began to make Gaia sick!

Of course, the humans did not notice that they were the cause of the planetary sickness and kept on damaging Gaia more and more. You may ask why did the humans not notice what they had done to their beautiful planet?

That is the question which humans MUST begin to ask or they will no longer have a planet to destroy! Will the humans finally learn how to love and care for their dear planet ?

Some humans have awakened and have chosen to focus not just on them selves or on what they want. Instead, some humans have finally awakened to the realization that if they do not change and take care of their planet, they will NOT have a place to live.

But will enough humans awaken enough to focus on the needs of their Earth Mother Gaia?

HOW MANY HUMANS WILL IT TAKE TO SAVE GAIA?

Will humans awakened to their true SELF and realize that:

IT IS THE NOW TO SAVE OUR PLANET

Only time will answer that question!

But, how much time do we have?