Through The Matrix, Chapter 8, The Flowing Time of the In-between 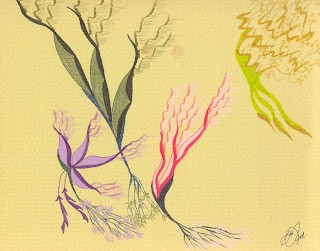 CHAPTER EIGHT
The Flowing Time of the In-between

I left off saying, “Time is an illusion of the third dimension.” I realize now that I could not understand that concept until I had had my experiences. I also know that my dear Shalone joined me from “the other world.”

I am now hearing Shalone’s distant voice reminding me that this was my first experience of “the flowing time of the in-between.” This “time” was much like dream in which time seemed to shift and change.

I did not see anyone in their physical body. It seemed more like I was seeing them in their dream time. I remember one time when I fell asleep during one of our Group Meetings in which all the members of our Village united to sing and dance. Shortly after we all started singing, I feel asleep and had a dream.

In that dream I lived many years, and became a mentor who was much like my dear Shalone. In that “dream” I studied for many years with Shalone, became a Mentor for our people, and finally died at a very old age. When I returned from my reverie, I discovered that the group had not even finished the first stanza of their song.

When I asked Shalone how that could occur, she told me that I had been in “dream time,” which is very different from  the awake time of our physical world. Shalone also told me that “dream time” was very similar to “the flowing time of the in-between.”

“What does that mean?” I asked her.

“My dear One,” she answered, “there are certain questions that can only be understood by personal experience. You will only understand “the flowing time of the in-between” while you are in it.

Then, the second that you leave it, you will totally forget your experience. However, you will remember that you had a wonderful experience about the way you wish you could spend the rest of your life.”

“OH,” I said in total confusion. When I looked into Shalone’s bright face she merely smiled and said, “There are certain things that you can only experience.”

It is as if there is a “me” who is beginning to exist that I have not known before. Yes, I know that my physical body is growing, and I am becoming a woman, but that is not what I am talking about.

I do not know much about this other reality, but I am pretty sure that I often go there when I sleep. However, when I awake, I do not remember anything. However, I do have a same strange feeling that something very important has happened, but I cannot remember what.

As I write this experience in my journal, I am getting more and more frustrating. Where is Shalone? Why did she leave me? Did I do something wrong?

“No my dear,” I suddenly hear Shalone’s sweet voice. “I have never left you. However, I have been inside the Flowing Time of the In-between, that you speak of. Since that world is of a higher dimensions you cannot perceive me, but I can perceive you.

“What does that mean?” I ask in a very confused tone. “Does what you are talking about have something to do with the Flowing Time of the In between?”

“Yes, my dear,” Shalone answered in such a soft voice that I knew she would be leaving me soon. “You are correct dear, the Flowing Time is calling me. However, while you can still hear me, let me tell you that I have learned how to communicate with you from my higher dimensions.

“Therefore, whenever you want to talk to me, be sure to raise your consciousness into the higher dimensions. Then you will hear me.”

“Wait, wait,” I cried knowing that I was loosing contact with Shalone again. “Please tell me more.” But, the only answer I could hear from Shalone was, “Learn to listen to the higher dimensions.”

And then Shalone was gone . I called her again and again saying, “How do I listen to the higher dimensions. In fact, what is a “higher dimension?” It was then that I realized that I would need to listen more closely to whatever she told me.

It seemed that the farther away, which I guess meant that she was in a higher dimensions, the more difficult it was to hear her. But, I did not even know what a dimension was. I was sure that no one in the village would be able to assist me, so off to the Learning Tree I would need to go.

I waited until just before dawn to leave. Fortunately, I had learned how tell myself to wake up at any certain time. I guess that was because I was always creeping around the village in the early morning and late night.

I found that when I was alone I could get much more information about what was “really happening.” I always had this gift, or was it a curse, where I needed to know that which most people would never think about.

Hence, I did not get this information form people, except for Shalone. Instead, I got my information from nature. In fact, it seemed like only the nature that surrounded us was able to tap into the Flowing Time of the In Between.

At lease, I imagined that Nature was tapping into this flowing time that somehow flowed “between” us humans, but into the awareness of the animals. I had always thought that animals were more connected to Nature than humans were.

“You are quite correct,” said a voice that I did not recognize, but it did seem to be of a male orientation. However, the heart-space of this being was as soft and gentle as Shalone’s.

“Are you Shalone in another form?” I asked the voice, as I had no visual image of this being.

“You can see me if you wish. Most humans are afraid to see me, so I usually remain cloaked.”

I saw the smile before I saw the face, but somehow, that seemed natural.

“You are not actually seeing me with your physical eyes. Instead, you are perceiving me with your consciousness. But, that is quite easy for you to do, is it not dear one?”

Then I heard what was much like a laugh that felt like a blessing. I was so overtaken by the “feel” of that laugh that I slowly started to “flow out of time.”


“Yes, dear One,” answered my new friend.
“I am here to assist you on your first experience of the flowing time of the in-between.”