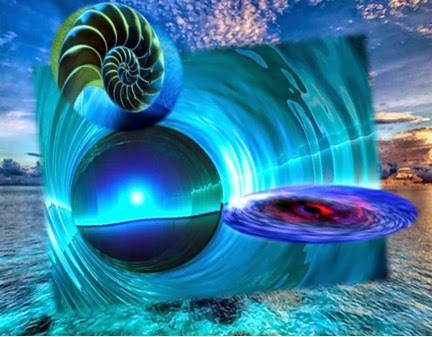 Your third dimensional perceptions have been stretched to their limit trying to compute frequencies beyond the fourth dimension. Hence, your brief glimpses of something that is just beyond of third/fourth dimensional seeing and hearing, can only go into a subliminal level of your 3D brain.

Your earth vessel is feeling that something is very different, but it cannot determine what that “something” might be. All these changes in your perception are because you are making the transition from third/fourth dimensional perceptions into fifth dimensional, and beyond, perceptions.

Then you will move on to the fifth dimensional perceptions. More and more of our grounded ones are experiencing something that speeds through their awareness, flickers at the edge of their vision, whispers softly into their hearing and/or speeds past their body.

These faintly perceptible perceptions are the increasing as you become entrained to the fifth dimensional reality that has ALWAYS surrounded you. Yes, the fifth dimension has always been a component of your reality, as the higher frequencies of reality exist infinitely within the NOW of the ONE.

The density of fear and anger that has surrounded dear Gaia for more “time” than you could count is finally beginning to waft away. Gaia is gradually ascending Her planet into higher and higher frequencies. Some of Her dear residents will not be able to remain attuned to the higher, baseline frequency and will continue to live within the 3D Matrix.

This 3D Matrix was provided a virtual reality in which beings of the third dimension could live on Gaia’s Earth. Gaia is now releasing Her 3D Matrix, as She is ready to return back into Her fifth dimensional state. You see Gaia misses Her higher frequency life.

Fortunately, there is also an ever-increasing number of humans who are remembering and missing the fifth dimensions of reality that are filled with unconditional love and multidimensional light. Within these realities there is no “time.” Therefore, time does not end or start, and realities do not end or start.

Life in the higher frequencies exists within the Flow of the NOW. Because Gaia’s resonance is flirting with the fifth dimensional NOW, more and more of Her inhabitants are becoming conscious of the frequency shift of their reality. Some are resisting this shift, which makes them fearful and angry.

On the other hand, many of you are “almost” recognizing that something is changing. We say “almost” because you know that something is different, but your 3D brain has no explanation for what is happening. Those who have meditated have prepared themselves for this shift by learning how to consciously experiencing higher dimensional states of consciousness.

We remind you that there are many manners in which our grounded ones can meditate. Therefore, just because one may not formally meditate, it does not mean that do no expand their consciousness into the higher dimensions. Any form of creative endeavor will serve to automatically expand your consciousness.

Once your consciousness begins to expand to encompass your conscious perception of the fifth dimension, you begin to experience reality as what your 3D brain would compute as “energy fields.” Since your 3D brain is not calibrated to perceive the fifth dimension and beyond, it can only interpret your brief fifth-dimensional perceptions as “energy fields.”

We speak to our grounded ones within this NOW to assist the ascending ones to better understand how to consciously attend to these “flashes of perception.” First, remember to remind your self that these flashes are real. Your 3D brain is unable to accept that information. Therefore, remember to automatically connect with your multidimensional mind, which over-lights your physical brain.

With that explained, we wish to tell you that these “flashes of perception” are actually occurring within your core, which is the portal to your Multidimensional SELF. What is happening is that your core self, your Lightbody, is becoming activated by the higher frequency energy patterns that are entering Earth’s atmosphere.

These “flashes” are entering Gaia’s atmosphere, which is her planetary aura, because Earth is increasingly resonating to higher and higher frequencies. Those who are ascending with Gaia are also resonating to higher and higher frequencies. Therefore, their Lightbody, which has been latent within their kundalini force within their spine, is being activated.

You, our grounded ones, can accelerate this marvelous process by reminding yourself to consciously attend to the ever-increasing perceptions for which your 3D brain which appear to have no explainable source or reason. This acceleration is occurring because your 3D brain is in its primary stages of merging with your Multidimensional Mind.

You can assist this process by telling your self that what you are just beginning to consciously perceive is “real.” That thought is the beginning of your bridge between your 3D brain and your Multidimensional Mind. Every time you “walk across this bridge,” you create neural synapses that connects your brain to your multidimensional mind via the wormholes of your “junk DNA.”

When you work with energy patterns before they become manifest in your physical reality, you will be serving both yourself and Gaia by clearing possible fearful realities. Also, by recognizing the higher frequency energy fields, which are based on unconditional love and multidimensional light, you can full heartedly accept them into your personal and planetary reality.

Do you see how VERY important you are to the process of ascension?

At first, you will likely recognize ONLY the negative energy fields, as your 3D consciousness is constantly on alert for problems. Eventually, you will feel comfortable with your service of working for ascension at the baseline level of energy fields.

When you love and transmute on the level of a energy field, you will be either assisting a loving energy field to be grounded into Gaia, or transmuting a fear-based energy field before it becomes manifest.

We wish that all our volunteers to Earth could instantly experience a swift return to SELF, but we know how strong the “brainwashing” is during your NOW. Fortunately, we can inform you that you Galactic Family is making great strides in the process of re-locating those who cannot, or will not, accept the light into their consciousness. We are very pleased that you, our emissaries to Earth, have been so dedicated in your process of assisting Gaia and ALL Her creatures.

As your consciousness continues to expand, you will begin to perceive more and more alternate, parallel and higher dimensional realities. Your Multidimensional Mind has always had these perceptions, but until NOW, it was too disconnected from your 3D brain for you to consciously be aware of these experiences.

Because your consciousness is now shifting into a higher frequency, you are releasing the illusion of “one reality at a time.” The key to this process of release is the word “time.” Remember, as you move into your fifth dimensional consciousness your perceptions are no longer limited by the 3D rule of polarized, separate realities.

Because you are shifting into higher perceptions, you are beginning to perceive several realities within the NOW; and all these realities are strangely intermingled. Of course, the “strangely” component only occurs to your 3D thinking that is still limited to the old concepts of separation, polarity and limitation.

As your consciousness becomes more multidimensional, your perceptions are becoming multidimensional. Hence, you may be confused as to “What reality is the REAL REALITY?” The answer is that all these realities are real within the their own energy field. If you were to enter an energy field of a certain reality, you would experience the thoughts, emotions, thoughtforms and energy fields of that reality.

Day by day, more and more members of humanity are beginning to consciously perceive these multidimensional energy fields. All of these energy fields represent slightly different frequencies of resonance that you can perceive while in different states of consciousness.

When you do perceive them, you experience them only as an “energy fields.” But, as you consider these energy fields as the auras of the realities, you consciousness will gradually expand to encompass that concept.

Higher dimensional realities exist within these orbs of realty. At first you may believe that these orbs are “new.” However, they have always been there, but your perceptions were limited to the third/fourth dimension. It is within this NOW that you are beginning to imagine what might be beyond the limitations of your 3D brain.

Do you remember when you used to believe that only that which was attached to the 3D Matrix was real? Now you are realizing that what is attached to the Matrix is an illusion and what extends beyond the matrix is the higher dimensional versions of that reality. All these realities are “real,” but only to those who resonate to that frequency. You will only perceive the dimensional realities to which you have opened your mind.

However, you may be deep in meditation, creativity, or even fun, which expands your consciousness into these higher frequencies, then in a flash, the 3D Matrix grabs your attention and you are back in the 3D Matrix. The Matrix is like a web to which you can easily become attached, and the more you struggle, the more intertwined you become.

If you can relax into your process, remember that you are a TRUE multidimensional, explorer. You may not know where you are going, but follow your inner all. This call is the Clarion Call that signals,

Stay Connected and Subscribe to My Newsletter
Posted by Suzanne Lie at 6:20 PM