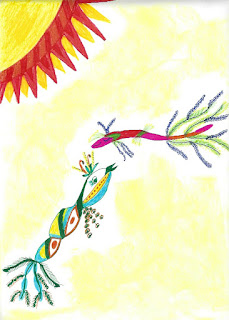 As I lay at the foot of the cliff, the pain was so extreme that I moved in and out of being conscious. Somehow I knew that I needed to stay awake, but the pain was so intense that I wanted to go to sleep. Is this what I get for separating myself from everyone else in our community?

“No Dear,” I heard another voice say, “This is just a very bad accident. But you will need to allow people to take care of you for a while, as these wounds are extreme.”

The voice sounded like Shalone, but I could not see her face, or much of anything. In fact, I kept passing out, waking up for a few minutes, then passing out again. I needed help, but I was far away from the Village, and I had no way to let anyone know I was here in the woods and wounded at the bottom of a cliff.

“Why didn’t I tell anyone where I was going? How will they know where to search for me?”  I heard myself cry out loud.

Then, suddenly, I heard a rustling through the woods, and someone was calling my name. I tried to call back, but I exhausted my ability to speak and was losing consciousness again. Then, I thought about my animal friends. Perhaps they would bring the villagers to me?

I put out a call to all my bird, deer and even a few bear friends, “Please guide my people to me.”

Did I just say “my people?” I asked myself. Then I heard Shalone’s sweet voice saying, “Yes love, they ARE your people. And some of them have been able to allow Nature to tell them where to find you."

“In fact,” Shalone’s voice continued, “They will be here soon. I will stay with you here until they arrive. Then you must trust them and allow them to love and care for you.”

I knew exactly what Shalone was talking about. I had pushed away everyone and had not allowed them into my world. I had never allowed them to care for me, and then blamed them that they did not take care of me.

With that realization, I heard them coming through the woods.

Suddenly, two hunting dogs had found me and were barking and running back to my friends to guide them to me. Oh my, I said “my friends.” Does this mean that I can finally let other people enter my heart and my mind?”

“There she is!” I heard the strong voice of my friend John. Yes, he had tried and tried again to be my friend, but I had shunned him, and not in very nice ways.

“Do I need to fall off a cliff to finally trust people?” I said out loud.

“Yes, you do, dear friend,” I heard John say. “But we are indeed your friends forever!”

With those words, I passed out. I wondered where I would go to now, when I heard John say, “You are not going anywhere, and neither am I.”

How did he know to say that to me? Could he read my mind?”

“Friends forever, friends forever,” circled my mind as I slowly lost consciousness again and went into, yet, another world. But this world had love and light and healing and fun. Could I allow my self to let that world into my life?

Then I heard John saying, “Hold on Zara Lynn! I am here, and I will NOT leave you!”

It took me the better part of two years to heal my body. But John was right. He only left my side to make food for us. The members of the Village made sure that we always had food in the pantry, and many of them brought food that they had cooked for us.

Yes, “US!” I never thought that I would be an “US,” but John kept his word and never left me. In fact, even after I was well enough to take care of my self, which took over a year, he stayed with me.

The only, and wonderful difference, was that when I was well enough, he began sleeping with me in “OUR” bed.  “US” and “Our” were words that I had seldom spoken before dear John came into my life.

I know that from my storyline that I may seem too young to be married, but I had had my first “woman’s time,” and John was starting to shave. However, both John and I wanted to make sure that we did NOT get married because of some external rules. If we decided to become Man and Wife, we would do so when we wanted and how we wanted.

Because some of my injuries were in my “female parts” I did not think it was possible for me to have a baby, or even to become pregnant. On the other hand, the love that John and I shared became so strong that we decided to make our relationship a promise that we would share forever.

I say “forever,” because I have finally admitted that I had died at the bottom of that cliff, but somehow was able to return. Actually, “somehow” is not correct. I fought death and won because I knew that John loved me and that he would be too sad if I died.

When he was the first one to my side, he looked into my semi-opened eyes with such love and caring that I could FEEL his deep love enter my heart and slowly flow through my gravely injured body. It was John’s love that healed me.

Our sex life was as gentle as a morning breeze and as strong as a giant tree. Afterwards, we often walked the woods together in search of any wounded animals or birds.

When we found them, which we usually did, we took them home and lovingly healed them. We felt as if we were thanking the woods for somehow allowing me to survive and heal from my fall.

The people of our Village watched our relationships and saw how I had healed, as well as how John and I worked together to heal the forest beings. In fact, whenever a child or an animal was wounded or sick, they were brought to our home for John and I to heal, which we did.

As we grew into our older years, John’s soft courage and strong decision making, made him a leader in our Village. In fact, he eventually became THE Leader of our Village. And I, believe it or not, became a midwife.

Somehow, my near-death experience had left me with the “gift of healing.” My healing service had started with healing animals, which I realized that I could do with a loving touch.

Gradually I expanded my healing of animals to healing humans. Then, I also became a “midwife,” as well as a “Touch Healer” to villagers who were wounded or sick. Our life, and it gives me great joy to say “our life,” was wonderful. That is it was wonderful until the day that John suddenly, and very peacefully, died.

The loss of John was almost too deep to bear, and I started to become very ill. I was sure that I would die, and some part of me wanted to die, as I could not imagine life within John. However, a horrible disease began to flow through our Village. Then I was called on day and night to help others.

However some, in fact too many, of our villagers died. As the widows and widowers came to me for assistance with their sorrow, I also began to move through my sorrow, as well. But that is a story that I must keep to myself, as it is still to difficult for me to share.

After the grieving of the Village was gradually replaced with the births of new babies, the joys of life began to return to our Village. I was quite old by then, so when I was not healing, I was sleeping.

And when I slept, I dreamt of John. But I will tell you about that in my next writing. Sleep is near and so is the essence of my dear John.
Posted by Suzanne Lie at 9:52 AM