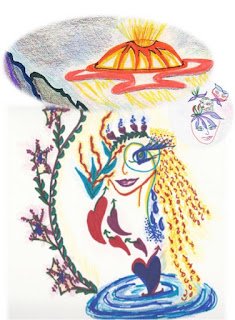 You may think that this is a good place to end my story, but this was notthe end of my journey. Instead, this new reality on the Star Ship, which is a fifth dimensional reality, is completely different, yet very much the same, as the physical life I had left behind.

Once I was on the Ship, I asked John if my body would be found dead on the blanket, and was very relieved to hear that my body had notbeen “left behind.” Somehow my body had been transmuted from my third/fourth dimensional physical body into my fifth dimensional, and beyond, Lightbody SELF.

I have asked John how my “Lightbody” was different from my human body? Again, he answered my questions with a long hug and a warm kiss. “Beloved Starlight,” which he called me since I told him that was my Healer Name in the Village, “relax into the process and allow your consciousness to expand enough to encompass this higher frequency of reality.”

“Then,” John continued, “you will be able to release your third dimensional habit of asking questions and transmute that habit into your fifth dimensional trait of focusing your attention on “the KNOWING.’”

I also felt that a “fifth dimensional KNOWING” was something that we received from a higher frequency expression of our SELF. In the Village, my Zara Lynn self focused on her KNOWING after Shalone left and she began her many adventures.

I did not know what “focus on the KNOWING” meant, but I did gather from the questions that I asked others, each person has their own manner of KNOWING. “Knowing” is how beings on this Ship communicate with each other, as well as via their own higher dimensional SELF.

Many of the fifth dimensional humanoids on this Ship also have a third/fourth dimensional physical/astral body on Earth. In this manner, they can travel from the Ship to Earth and back again to the Ship via their own “personal consciousness.”

Once on the Ship, they can easily join into Oness with their fifth-dimensional Lightbody, SELF. What I learned was that a fifth dimensional “Lightbody SELF” is too high of a frequency to be seen by “third dimensionals.”

However, if that third dimensional human can expand their consciousness into the higher fourth and fifth dimension, he or she will be aware that “something is there, that was not there before.”

Since their third dimensional human brain, and perceptions, are still bound by time and space, they cannot yet perceive that which resonates to the frequencies of the higher fourth and fifth dimensions.

They usually have light skin and blonde hair with many of the physical features of a third dimensional human, except that even the females are over six feet tall. These Pleiadians work closely with the Golden Ones to assist humans who are preparing for their Mission to assist Gaia with Her transmutation into a fifth dimensional planet.

Even though the Pleiadians look very human, there some very important differences. For one thing, whereas the third dimensional humans only use about 3% of their total brain power, the Pleiadians use ALL their brainpower.

Pleiadians often meet with humans during their dreams, or when these humans come onto the Ship in their night body. In this manner, the Pleiadians can assist humans to remember their innate creativity, inter-dimensional dreams, as well as the fifth dimensional conversations that they have while attending our Ship.

In fact, we often hold lectures, which many humans attend in their “fourth dimensional bodies” while their third dimensional body sleeps. The Pleiadians look quite human, but they still have to put a “glimmer” around their bodies when they visit Earth. In this manner, they look just the way that each human needs them to look so that they do not become frightened.

In other words, the Pleiadians are like a huge family in which there is a resemblance, but each member of that family has different personalities, desires and ambitions. This form of “difference” is very important, as it creates a society in which everyone is respected and loved for their differentcontributions to the Society of the ONE in which they all live.

To use third dimensional Earth terms, I would say that we, as I am now included in that “we” of the Ship, are all part of one huge “garden,” but each “flower” is different. This difference is shared with, and enjoyed by, the entire “garden.”

Also, many of us dothe same thing, but we all hold an individuality within our SELF to be shared with others. In this manner, a deep sense of total acceptance and connection is created and enjoyed by the entire collective.

This “inner collective” is the combination of everyone’s thoughts and feelings, which intermingle and intertwine to make a strong unity of consciousness. I know that I am just beginning to understand how this fifth dimensional reality works, but John tells me that as I relax into my new life, my higher sensory perceptions will come fully online.

When I ask what one can do with that much brainpower, they lovingly tell me to relax into the process. In fact, they all say, “Questioningis third dimensional, and Knowingis fifth dimensional.”

I am so very happy to have John with me to support me during this process of acclimating to a totally different reality. Of course, he will not teach me, and usually says, “You are remembering how to BE YOUR SELF. When you began your third dimensional incarnations you had to forget your fifth dimensional ways in order to fit into that world.

“Now that you have returned to your true, fifth dimensional frequency of reality, you are called on to remember your true fifth dimensional SELF. Beloved One, to me you are, and have always been, a light from the Stars. Hence, ‘Starlight’ is the name that best introduces you for who you are.”

“What could I say to that? Therefore, I continued to be known to myself, and to all the many new friends, as “Starlight.” And, yes, I finally, with great effort, learned/remembered how to go inside to find my answers. In that manner, I could contribute more and more to this wonderful society. Then, eventually, this Ship fully became John and my “New Home!”
Posted by Suzanne Lie at 9:40 AM