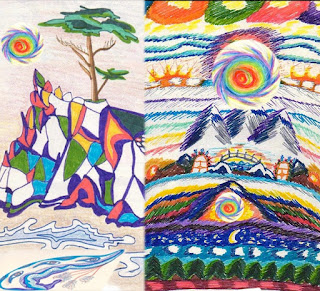 That question has a different answer for every different individual. In fact, each individual is a “puzzle piece” of the cosmic puzzle of shifting frequencies of reality.

It is because of this “shifting frequencies of reality,” that many Galactics have chosen to take third/fourth dimensional earth vessels within this NOW. We have been protecting, guiding, and, as much as possible within this karmic plan, been assisting Gaia to return to her true fourth/fifth dimensional resonance of reality.

When a planetary being, such as Gaia, is ready to “shed its 3D Matrix” and transmute into a higher frequency of reality, the darkness must all be revealed so that it can lovingly be transmuted into the higher frequencies.

Those who volunteered to take an earth vessel within this NOW have taken an earth vessel to better assist Gaia. However, it is vital that our “volunteers” to assist Earth awaken NOW to the memories of their higher dimensional SELF, and the promises they made before they chose their current earth vessel.

The higher and higher frequencies of your consciousness, as well as the physical vessel that surrounds, encompasses and grounds your multidimensional consciousness into Gaia’s third dimensional, planetary body, is they key to your personal and planetary ascension into fifth dimensional frequency of Earth.

All the wars, bombs, poisons, pollution and radiation of Chernobyl, as well as other areas that suffered “bomb testing,” great pollutions and wars, will need to be transmuted back into their higher dimensional frequencies of reality.

Many of the damaged areas of Gaia, as well as the greed and selfishness that created that damage, will need to be transmuted by the Ascending Ones who volunteered to leave their loving, safe and inspirational fifth dimensional worlds, to take a vessel to assist Gaia, are greatly honored by their Galactic Family.

From the perspective of the fifth dimensional frequency of reality, to which we/you will return, your third dimensional self is much like an automobile that your human self purchased so that we can more easily travel through the third dimensional reality.

We Galactics do not think of “realities” as places. We think of realities as frequencies. Therefore, one physical “place” can have many different realities on different frequencies of Gaia’s planet.

When the fourth/fifth dimensions are one’s primary “frequency of habitation,” they can more easily see auras, expand their instincts and creativity, as well as communicate with their own higher dimensional expressions of their Multidimensional SELF.

This shift is often a great challenge for our human “grounded ones” because their “inner, higher dimensional SELF” is, consistently and persistently, endeavoring to remind their “physical self,” who surrounds and encompasses the consciousness, to remember and fulfill the Mission that they chose while they were wearing their Multidimensional SELF.

Too often the Higher Self becomes forgotten in the long, and often difficult, process of wearing a third dimensional earth vessel. We remind ALL of our volunteers who took an earth vessel to assist Gaia with Her Planetary Ascension, that you are NOT alone!

We, the higher frequency expressions of your multi-frequency SELF, experience everything that you, our brave volunteers to take an earth vessel on ascending Gaia, are experiencing.

One of the primary things that we, your Galactic Family, are assisting you with is to maintain a consciousness that resonates to the mid-fourth dimension and into the fifth dimension. We know that most of you have busy lives. Therefore, these higher states of consciousness are something that you can visit while meditating, etc.

Again, we wish to remind you that WE, your Galactic Family in the fifth dimension and beyond, are always with you. Since we resonate beyond the 3D illusion of time and space, we are able to be with you any where and any time that you need.

We perceive your physical plane as the “time/space” adventure to remember your innate time/NOW and space/HERE of the fifth dimension and beyond that we are observing from the safety and unconditional love of our fifth dimensional, and beyond, reality.

One of the most difficult things for humanity to change is their beliefs. We wish to remind you that you do NOT need to change your beliefs, but to put them through the filter of your fifth dimensional consciousness.

Since your fifth dimensional consciousness is not bound by time or space, it can soar into the HERE and NOW of the many realities that resonate to the fifth dimension and beyond.
Posted by Suzanne Lie at 3:35 PM