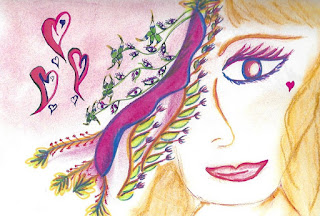 In fact, the “feeling” of Unconditional Love, starting with Unconditional Love for your SELF, is important for your process of moving your consciousness, and eventual Sense of SELF, and the vessel that serves as your “human” form.

Your expansion movement into the fifth dimension and beyond is a flow of your consciousness, that which feels much like a gentle stream or a soft breeze. Please note that movement is a different experience in the different dimensions.

In the third dimension you move across the time and space of your physical reality via your physical body or the machines that transport your body.

In the fourth dimension you move into, and through your “dreams,” “imagination” and the other means by which you can allow the creative ideas of the astral world via dreams, peak experiences, and meditations.

In the fifth dimension you move into and through the myriad frequencies of realities and alternate expressions of your Higher Self. Your fifth dimensional consciousness is your portal to your Multidimensional SELF. It is the opening of this portal that is vital to complete your ascension/transmutation process.

We say “ascension/transmutation” because this is the process of transmuting your third through fourth-dimensional consciousness into the very different versions of reality, which you will perceive in the fifth dimension.

Some of you can remember experiencing dreams, mystic experiences, and/or “Near Death Experience” in which your brain shifted into the Delta Wave Consciousness of the fifth dimension.

Once your brain shifts into Delta Wave Consciousness, you will slowly, or suddenly, remember the “Inter-dimensional Communications” that you have been experiencing.

I wish to say that HUMANITY is CHANGING! Of course, now, I can speak directly to people all over the world, but in the 80’s, and for many years later I could only speak with people within my area. I guess that is why the Arcturians told me to “make a website” when I had no idea what a website was.

Out of nowhere, I was asked to be involved with a college who was running a study about whether or not a “website” could ever make money. The results of their test were “NO!” No one will ever make money on the “Internet.”

But, within this NOW, if you want to “make money,” then you had better get a Website, or a Blog, and gain a presence on the Internet. The results of the Internet’s “easy access to anyone who lives anywhere in the world,” is very similar to “becoming fifth dimensional.”

We have taken third dimensional forms (a great personal sacrifice) to be able to walk among humanity to better understand the best way to move through, and successfully assist, Gaia with Her Planetary Ascension, which included all those we can expand their resonance into the fifth dimension.

In other words, any person, place, situation, or thing, that raises its resonance to the frequency of the “Threshold into the fifth dimension” will “ascend.” However, ascension is not ascending into the clouds with a Harp. “Ascension” is learning (with your EVERY thought and emotion) that:

What YOU Think About  - YOU Bring About.

Whatever thought or emotions that you allow to enter your mind is INSTANTLY, as there is NO time and NO space in the fifth dimension, transmuted into the reality that you are experiencing within that HERE and NOW!

In the fifth dimension, there are NO “rehearsals” or “finding a better time.” There is only HERE, and only NOW! There are NO, “I will try it again at a different place and a different time,” as this is not the Time or Space as you may know it in the third dimension.

Many of you are being called to stay with Gaia to assist with Planetary Ascension. In order to do this, many of you are learning/remembering to maintain a conscious and simultaneous connection with your third dimensional Earth Body, your fourth dimensional Astral Body, and your fifth dimensional Light Body.

This “Inter-dimensional Assignment,” for which many of you have volunteered during your current incarnation, will largely be based on your ability to Assist Planet Gaia with Her Planetary Ascension.

In order to assist planet Gaia, you all need to UNITE with ALL dimensions of Gaia’s planetary body. Also, you will need to deeply experience Unity Consciousness with your fellow humans, as well as the other inhabitants of Gaia’s world.

We, your Galactic Family can more deeply interface with Gaia, Her animals, as well as the Elemental Beings of Earth, Air, Fire and Water, when YOU, the humans who are currently incarnated on planet Earth, join us in consciousness, as well as in action.

Because Gaia is a “free will planet,” we the Galactics had to make sure that Gaia, as well as Her many inhabitants, want to realize and assist with the Planetary Ascension. Unity Consciousness is the Key to ascending Gaia and Her inhabitants!”

There is the quote that says, “It takes a village to….”
In this NOW it will “Take a Planet, and the majority of Her inhabitants to…!”

It will also take Gaia Herself, and a majority of Her planetary inhabitants, to ascend the planet. In other words, for Gaia to ascend, humanity will need to release their individual, selfish desires and needs to focus primarily on PLANETARY ASCENSION.

Therefore, we the Arcturians ask you,
“What are YOU Doing for Planetary Ascension?”

WE KNOW THAT MANY OF YOU ARE ASSISTING GAIA IN MANY WAYS.

If you wish to share what you are DOING to assist Gaia with Her Planetary Ascension, please feel free to write that in the “Comments Section” of this Blog. In that manner, you are doing your best to enhance the great power of Planetary Unity.

We appreciate it if “YOU” choose to share how you are assisting Gaia, as you may give ideas as to how others can best participate in Planetary Unity.

Blessings to you all
The Arcturians and YOUR Galactic Family
WE, the members of your Galactic Family, wish to thank ALL the beings on Gaia, human and non-human, for any assistance you are “Contributing to Planetary Ascension!”


The Arcturians and YOUR Galactic Family
Posted by Suzanne Lie at 11:37 AM