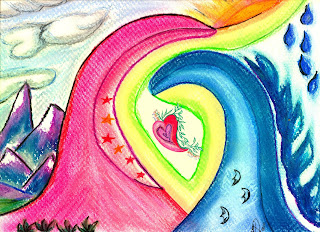 Dear Ones,
It is the NOW in which your leaders need to have the “big picture” in their minds as you  all move through the great changes that will be taking place in your reality. As you know, too often, things have to get worse before they get better.

The reason for this is because, once darkness has been revealed, it is best to move deep into the core of it because, soon enough, the disguise will be back. Then the light and love can be covered again by the darkness and fear.

Fortunately, there are times, just as the during your hurricane “Harvey,” in which fear can come forward in such a manner that the ordinary people become great beings of light, who find their own Inner Light to find their inner courage, unconditional love, and immense bravery.

In a situation such as a huge hurricane, many people are facing their greatest fear, the fear of survival, However, they have pushed that fear away and found great courage to save themselves, their loved ones and many people who are total strangers.

This expansion of light does not necessarily make the situation go away, as with the case of Hurricane Harvey. However, it does greatly expand the personal caring and courage of many of the people who are involved, or chose to become involved, immense “service to others,” during this horrible disaster.

New leaders are being born, and some of the old leaders are revealed as having personal needs that are more important than the heroic assistance for those who are suffering. We the Arcturians, commend the many people who expanded their consciousness, their courage, and their innate sense of duty to their fellow man during this disaster.

Many leaders are being born during this NOW who are leaders based on Unconditional Love and Courage. The courage of these people greatly expands their consciousness by assisting their fellow humans, as well as dear Gaia, who has been deeply wounded.

On the other hand, those who have selfish gains and care only for their own self aggrandizement, will inadvertently reveal their true selfish needs and lack of empathy for their fellow man and for Gaia.

It is the task of the ascending ones, to find in their hearts the ability to send unconditional love to the dark ones who can only think of themselves. It is likely that these ones will not recognize or accept that love, as they have become too lost in their own inner darkness.

However, those who face the initiation of finding and using their own Inner Light to forgive and send love to ones who have become lost to the darkness of their own selfishness and inability to feel true compassion or love, will find within themselves the deep compassion for ALL life that the Ascended Masters revealed when they faced their final initiation.

Yes, there is a form of “final initiation” that comes with a disaster, as each one remembers that ONLY the LIGHT can extinguish the darkness. Therefore, to send anger, fear and other dark emotions into a negative only feeds it. Hence, what our Ascending Ones are learning/remembering is that Unconditional Love is the strongest force in the Multiverse.

Therefore, to heal negative, frightening, and/or harmful experiences, Unconditional Love is the strongest cure and best state of consciousness. It is the initiation of the ascending ones to remember that, “There, but the love of God, go I.”

In other words, if you can remember the wonderful gift of personal power that accompanies your surrender to Unconditional Love, it will greatly assist you to walk the path of all Ascended Masters.

All Ascended Masters needed to be deeply tested to hone their potential for forgiveness, and remember that the love you send out, always returns to the sender. Sometimes the joy of this love was not able to be displayed or shared until after the ascending one had completed his or her final initiations.

The final initiations are the most difficult, as they force the ascending one to Unconditionally Love all life, as well as to love themselves without judgment. To walk the Path of “Return to SELF,” one needs to remember to love the ONE, that they ARE, as much as the ONE that they wish to BE.

We know that our words may be confusing to many, but it will not be confusing to those who have walked the Path long enough to reveal their own inner fear/darkness (as to us fear and darkness are the same).

Those who have dared to look into their fears, their own angers, and sorrows, and have found a way to heal and release them, have discovered a deep Inner Power which they usually wish to share with others. In other words, these people have found LOVE for themselves and wish to share that  “ability to love self” with others.

Love of Self also serves as a homing beam to attract the attentions of their higher expressions of SELF that resonate to the higher frequencies of reality. Once the ascending one is able to connect with their own SELF, who resonates to higher dimensional realities, their teaching begins.

And what does their Higher SELFs teach? They teach more about how to consciously connect with, interact with, and take guidance from their own higher dimensional expression of SELF.

Once one connects with their Higher SELF, they realize how fully human they are, yet,  simultaneously, deeply connected with the higher frequencies of reality to which they also resonate. It is then, that their/ visits to the higher dimensions during sleep and meditation begin.

First there is a “time of learning” in which they have “dreams” and other experiences where the greater truths of reality are revealed to them. After these revelations, the awakening ones often need “Earth time” to adapt to this new information and to find a way in which they can integrate these components of their selves into their daily life.

The integration of your Higher SELF into your daily life is one of the greatest challenges that our ascending ones face. Are they really talking with their own Higher Self? Or, is this connection just a dream, or a mere whim of their fantasy?

This beginning of their full awaking can often take many Earth years, and some get lost along the long path, and go back to being “normal.” Fortunately, there are many brave ones who “stay the Path” even though they fear that they may “be crazy,” “making it up,” “it is just a dream” and many other “reasons and excuses.”

Unfortunately, many of our “volunteers to take a human earth vessel” get lost in the illusions of the third dimension. Fortunately, most of them eventually remember their true SELF and return to the deep healing discovery of their own Multidimensional SELF.

This discovery of SELF is usually best learned by giving “service to others.” When our ascending ones deeply entrench themselves in “service to others,” their consciousness greatly expands. Then, via their higher states of consciousness, they can more easily remember who they really are and why they chose to take an earth vessel within this NOW.

It is this “Discovery of SELF” that guides humans into the superhuman, courage compassion, and service to others that disasters, such as Hurricane Harvey, has revealed how “normal people” give service to others in a “super-human” manner. It is deeply unfortunate that this disaster has struck, but the stories of great courage and unconditional love continue to remind all of humanity of their own innate Unconditional Love, and Service to Others.

We, the members of your Galactic Family, are proud of how our grounded ones assist each other during a deep time of need. It is for this reason, that Gaia is able to move more and more deeply into Her Planetary Ascension.

As all ascending humans know, there are many initiations that an ascending person must move through during their process of ascension. You can read the lives of the Ascended Masters to see the courage, sacrifice and service to others that they lived prior to their ascension.

We wish to tell all of you that planetary ascension also has “disasters” that must be faced. For both planet and people, the shift of the base resonance of consciousness into a higher frequency will bring out many challenges.

Very often, humans seek the assistance of other humans to assist them as they release that which is ready to be released, so that they can expand their consciousness into a higher frequency. In the same manner, Gaia must highlight areas of Her planetary body that are in need of attention as She moves through Her Planetary Ascension.

With an “Earthly disaster” humans and Gaia become ONE as humans assist other humans, as well as their planet. There are many humans who will need great assistance within the aftermath of this disaster. In the same manner, there were need to be much assistance necessary to heal the many wounds on Gaia’s planetary SELF.

The result will be that humans and Gaia will work as ONE to heal the wounds that both persons and planet have suffered. Too many humans have lost loved ones, and too much damage has been done to the surface of Gaia.

Together, people and planet, will slowly return to normalcy, but after great personal sacrifice and assistance from the many volunteers who have come to Texas to assist during this extreme crisis.

Then, as humans and planet work as ONE to heal that which was greatly harmed, both the humans and the planet will be healed from the great Unconditional Love for ALL that has been shown during this huge personal and planetary disaster.

We, the Arcturians, send Unconditional Love and Violet Light to both people and planet.
We have seen how strong, courageous, loving, brave humanity can be during a time of crisis, and we commend you. Just as you have moved through this crisis by many humans coming from many places to work via Unity Consciousness for ALL life as well as Unconditional Love for all beings.

We, your Higher Expressions of SELF, commend you and offer all the assistance that you need. In fact, by the many “super-human” tasks that have occurred during this disaster, you know that YOU are your Higher SELF, and your Higher SELF is right HERE within your NOW.

The Arcturians and Your Galactic Family
Posted by Suzanne Lie at 8:51 PM