Perceiving and Embracing the Ancient Energies
And Higher Dimensions of Reality 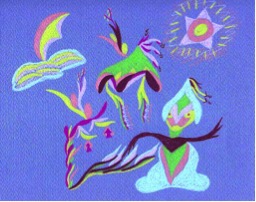 As your fifth dimensional consciousness becomes activated, you will likely be able to perceive more and more of the Ancient Energies. The perception of these Ancient Energies is not common because they flow into your reality through the process of transmutation.

Transformation means: To change or alter in form, appearance, frequency and/or nature. Transformation is when something, or some person, experiences an alteration, metamorphosis, and/or mutation into a different form of express. These forms of change can occur within your fourth and fifth dimensional states of consciousness.

On the other hand, TRANSMUTATION means that the person, place, situation or thing transforms into a HIGHER dimensional version of a person place, situation, thing and/or reality. Specifically, transmutation means to change the frequency of these persons, places, situations and/or things into the fifth dimension or beyond.

On the other hand, if your consciousness resonates to the higher frequencies of the fifth dimension and beyond, you will feel hopeful, inspired, creative and have a deep need to assist others. You will never feel alone because you can perceive that there are the higher dimensional being who accompany you on your journey to third dimensional Earth.

Your fifth dimensional consciousness is the carrier wave that travels from your higher dimensional expressions of SELF, and into as many synaptic junctions in your human brain as you will accept.

It is through the process of these inter-dimensional synapses within your brain that you can perceive your higher dimensional environment as it glitters beyond your third and fourth dimensional perceptions.

We, the Arcturians, in consort with the Golden Ones, the Venusians and the Pleiadians, have been assisting Gaia to prepare for Her transmutation into a higher resonance of expression. Gaia has long awaited humanities ability to match Her rising planetary resonance.

Gaia is a good “mother planet” and does not want to leave her human children as she continues to raise Her planetary resonance into the higher fourth and fifth dimensions of reality. In fact, Gaia’s frequency will continue to rise, even if it is without the assistance of humanity.

All of Gaia’s elementals of Earth, Air, Fire, and Water have been transmuting into a higher frequency of resonance. The “scientists” are calling this process “Global Warming.”

The lost ones of humanity know that they cannot transmute into the higher fourth and fifth dimension, so they are trying to halt this process of transmutation. However, they will not be successful as it is Gaia’s chose to ascend.

The lost humans can make Gaia’s ascension more difficult, but they cannot stop that which has begun in the higher dimensional realities and is slowly, or quickly, proceeding according to the Divine Plan.

On the other hand, with meditation and a search for mastery of the mind, one can become consciously aware of the energy fields that live within, and around, their aura. Also, there are portals within one’s aura, which most humans are unaware.

However, if one expands their state of consciousness to encompass the fourth dimension, they will perceive their third dimensional reality from the different perspective of the higher dimensions.

An example of this is your dreams. In your dreams, the timelines may change, people may come and disappear, and you can “wake up” from one dream, then “fall asleep” to have a completely different dream.

This total change of perspective was NOT determined by your environment. Instead, these higher dimensional perceptions are changed by the frequency of consciousness from which your dream, thoughts, and/or actions have arisen.

Your outer, waking environment will also greatly influence your perception and your states of consciousness. There are also ANCIENT ENERGIES that have resonated to certain areas for so long that the ancient energy fields are totally intertwined with that location.

The more one can expand their consciousness to embrace the fourth dimension and beyond, the more they will be able to have inter-dimensional experiences while in nature. More and more, one’s inner guides are directing them to remember the higher frequencies of reality that have always been there but were forgotten once the human's perceptions were limited to the third dimension.

As humans begin to remember the higher frequencies of their innate Multidimensional SELF, they will also become more in touch with fourth dimensional beings, such as the Faerie Beings, and all of Gaia’s earth, air, fire and water elementals, as well as the higher dimensional frequency of the trees, animals, skies, water and Sun.

It is your challenge as humans to release your human ego in order to merge your consciousness, perceptual fields and physical interactions with Gaia’s third, fourth, and fifth dimensional expressions of reality.

As humans become willing to admit that they are ONE with ALL the many elements and elementals of their Planetary Mother, they will become ONE with Gaia. It is within the Oneness with Gaia that humanity can perceive the ancient energies that resonate to the frequencies of humanity’s higher states of consciousness.

If the members of humanity can remember that they have chosen to take an earth vessel during this NOW of great challenges for Gaia, they will be more able to assist with the Planetary Ascension which is based on the Ancient Energies of Ascension that have always been but are too often long forgotten.

Therefore, too often, humanity became lost in their “power over others,” and forgot that they took a human body to assist Gaia with Her Planetary Ascension into the fifth dimensional resonance of reality.

However, as humanity begins to find their own Power Within, their perceptual fields will expand to include the higher fourth and fifth dimensions of Gaia’s Earth. Many humans are brave Galactic beings who left their Starships and Homeworlds to assist Gaia with Her Planetary Ascension,

Unfortunately, many of these brave beings who chose to take an earth vessel to assist with Gaia’s planetary ascension became lost in the many lies and illusions of third/fourth dimensional Earth.

It is for this reason that the awakened members of humanity have been called on to assist with opening the Ancient Portals so that the fifth dimensional energy fields can flow onto Earth.

With the resumed flow of higher dimensional energies into the body of Gaia, Her awakened inhabitants will be more able to recognize, choose and accept the Fifth Dimensional waves of energy that are encircling Earth in preparation for Her Planetary Ascension.

How can you, the members of humanity, assist with the opening of the ancient fifth dimensional portals through which the flow of Unconditional Love and Violet Fire can assist Gaia with Her process of Planetary Ascension?

Please ponder the above question and feel free to put your answer on the comments section of this Blog.

Blessings
The Arcturians
Posted by Suzanne Lie, PhD at 8:40 AM