Looking Back to Move Forward --Year 2005 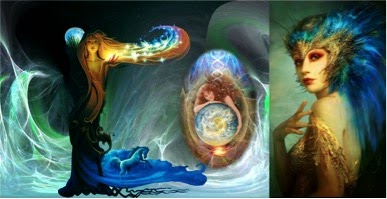 Dear Ones,
It is I, Gaia, returned again to communicate with the “People of my Planet."  I am here today to remind you that there is a part of you that is in a cocoon, looking out at a reality that is no longer quite real to you.

As you awaken to the CALL of this inner reality, the YOU that is “inside” your cocoon, is activating your inner senses and beginning to perceive life beyond the confines of the third dimension.

Once the old physical reality, the 3D Game, was the only reality that you knew, except for world you lived in your imagination.  However, the “silly idea” that your imagination was real was erased from most of your minds by the time you were teens.

Imagination was “just for children,” you were taught.  However, now the worlds that you “imagined” as a child are being revealed to you, especially from the safety of your cocoon.

With your expanded perceptions, everything is turning upside down. You are discovering that what you had always believed was stable, steady and “real,” is merely an ILLUSION and, yes, your imagination!

You are beginning to realize that your “imagination” is actually multidimensional thought.  I ask you now to “imagine” a reality in which you are one with me, Gaia, the consciousness of planet Earth.  I ask you to remember that YOU are the Gaia, and I AM YOU.

With the use of your wonderful imagination you can custom-make your planet by choosing the elements that you wish to select for the illusions in your hologram.  See yourself in a huge warehouse of realities—Reality Depot—where you can go up and down the isles and choose the reality elements you wish to project onto your hologram.

Each isle of the Reality Depot is actually a grid from the matrix upon which your reality is projected.  3D reality runs across the space/time continuum, and is embedded in the 3D matrix system.   From your 3D perspective you can’t see the matrix grids, as they are an octave above the actual holograms.

However, when you believe you are “only” third dimensional, you can’t see the grids or the many possible realities that they hold.  You are still asleep. Even if you “wake up” for a moment, you still can’t believe that YOU are the creator of your reality. You are so overwhelmed with surviving that you can’t see the forest for the trees.

Each and every “tree” is an obstacle, something or someone that bars your way. You have to struggle and fight for every reward that a harsh, external environment will FINALLY release to you. Fortunately, from within your cocoon, you can see that the “self” living outside your cocoon is the “larval” stage of your true butterfly SELF.

From inside the SELF, who is inside your cocoon, you remember when we, the planetary consciousness, chose to create the 3D Game. We chose the hologram program of struggle and hard work, as we believed it would make for a faster evolution.

We all believed that the polarity of light and dark would be a good catalyst for our development. We thought that the struggle between “good” and “evil” would create a great “virtual reality movie.” In fact, living with extreme polarities does create a good “movie,” and, often, it is not too much fun to be IN that movie.

Most uncomfortable of all, we discovered that evil is infectious and that, when it infiltrates us, we do mean and horrible things to others, as well as to ourselves. Then, because we programmed “cause and effect” into our holographic program so that we could learn more quickly, we become recipient of that evil later on, or in another lifetime.  Even I, the planet, have become caught in the “cause and effect” cycle of the 3D Game.

Also, the illusions of 3D Game have made the people believe that they are separate from everything and everyone. This belief has allowed them to do many cruel things, not only to each other, but also to their planet.

Entire forests that took hundreds, and even thousands of years, to grow were destroyed so that one or two generations could have homes and fires to warm these homes. Then, my people’s extreme emotions became intense rainstorms.

In the areas where my trees had been chopped down there were great floods, while dwellings placed in areas that were unstable, or in the pathway of the nature water flow, were destroyed. Eventually, lush lands became deserts that were ravaged by the harsh winds of my people’s negative thoughts.

My people also polluted their planet’s waters, killing what was once an active food chain for all my inhabitants to feed from. Lands were over-planted and poisoned with “fertilizers” and insecticides, which made it impossible for the natural flora and fauna to survive. Then, the once fertile farmlands became barren and were eventually destroyed, because there was no natural growth to catch the rain or stop the winds.

In an attempt to equalize myself, I had to re-adjust my plates, creating destructive earthquakes for the land dwellers. Meanwhile, the conflicting thoughts and emotions of my people could only be expressed as my tornadoes and hurricanes. My fifth dimensional elementals, water-Undines, fire-Salamanders, air-Sylphs, and land-Gnomes, struggled to right the balance of nature. However, they too were deeply affected by the thoughts and feeling of the people.

Meanwhile, the people, quite unconscious of the great power they had over their environment, felt victimized by my Earth and sought to battle against Nature.  Fortunately, the people are waking up and realizing the great Force of Nature that they carry within themselves.

As more and more of my people awaken to the fact that they are ONE with the planet, I, Gaia, am also awakening to my ability to project my consciousness into the hearts and minds of my people.

There are those of you, however, who have always opened your hearts and minds to me, life after life. You, my beloved people, have been my Priests and Priestess, my protectors and my voice. I wish to thank each of you for your great service. In the millennia of patriarchal domination, the Feminine Power of love and creativity has too often been lost to the legions of domination and fear.

But now, my Father/Sun has accepted the gift of the Return of the Feminine from the Galactic Center, my dear sister Pleiades, and has projected that Feminine Power into me, the Earth, as well as my Moon.

You see, my people, we are all ONE and we are ALL in transition. I CALL you now to emerge from your cocoon.  Where ever and whom ever you are, the time to answer my CALL is NOW!

I had a meditation in which I was instructed to add the below section to this process.
I hope that you wonderful readers will join me in this activity by posting your answers.
Then, as we "Look Back to Move Forward," we can do so together.
I begin by posting my answers.

The 5 W's
WHO did you see yourself as in 2005? (how we perceive our self is WHO we are)
WHAT were you doing? (and how did "doing" that impact your perception of self)
WHERE  did you live? (where we live greatly influences us)
WHEN were you most SELF-aware in that year?
WHY were you SELF-aware in that NOW?


Post from Sue
***
This posting deeply affected me. I maybe “breaking the rules” a bit. But as I read this post, instead of my going back to 2005, I found my self as a young child.
WHO myself as a young child, less than 5
WHAT I was hiding inside my “tree cave,” which was a tree with branches that went to the ground. I could hide in there to “pretend”
WHERE In my grandmothers back, back yard,
which the area between the alley and the official back yard
WHEN Some time in the early 1950’s
WHY I was pretending that the world was the way I say it in my “imagination”
rather than the way it was in my daily life

(If you want to break the rules and put in the vision that comes to your mind,


I have now started the trend.)
Posted by Suzanne Lie at 9:32 AM