A Message From Zadkiel, Opening your Spirit to Unconditional Love-through Sue Lie

A Message from Archangel Zadkiel
Through Suzanne Lie 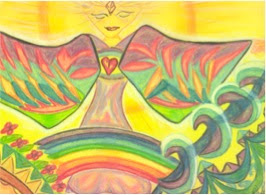 Opening your Spirit to Unconditional Love

However, what the Dark Ones cannot realize is that many of those who were once within the clutches of their fearful illusions have expanded their consciousness enough to be able to differentiate between an illusion from an actual reality.

I, Zadkiel, will NOW share how your expanded consciousness allows you to differentiate between that which is a holographic projection and that which is third or fourth and/or fifth dimensional reality that has been created by the unified, collective consciousness of the members of each of the frequencies of reality.

First I will remind you there are actually two versions of Earth. One is the 3D Matrix to which the “Power Over Others” groups are limited, and the other version of Earth is the actual planetary body of Gaia, which can only be perceived by those who live by the laws of “Power Within One's SELF.”

Power within one's SELF is a higher fourth and fifth dimensional concept that those who live via “power over others” think of as a foolish idea. “How could we control those who have found their power within?” asks the Power Over Others group.

The answer to that question is that they cannot control those who have found their innate power within. It is for that reason that the “lost ones/ the Illuminati” have created many holographic projections that appear to be totally real to the vision of those still limited to their third dimensional perceptions.

Those who have maintained and/or remembered their fourth dimensional consciousness will be able to “remember dreams in which the dark is trying to dominate the light.” They may also gain information during their meditative experiences that reminds that, even though the third/fourth dimensional versions of “life on Earth” are still running, there is another reality flickering at the edge of their awareness. Within this “other” reality, Earth is transmuting into Her fifth dimensional expression.

Those who are still bound to the 3D Matrix, which has served as a frequency net to limit Gaia’s planetary consciousness to the third/fourth dimensions, are incapable of even conceiving that any reality can resonate to the fifth dimension in which space/time is obsolete and all life resonates to the consciousness of HERE and NOW.

Fortunately, more and more humans are expanding their consciousness, and hence their perceptual field, to encompass the ability to differentiate the difference between a holographic projection and an actual, living reality in which the elements of Earth, Air, Fire and Water have merged to create life-forms that can accept the Light of Spirit.

The main difference between a true reality and a holographic reality is Spirit. A hologram is much like a puppet. A puppet appears to be real, but if you observe that puppet through your Third Eye and/or High Heart, you will know that that “puppet” has NO spirit.

One of the things that the Dark Ones have done has been to create holographic projections that intermingle with the third dimensional physical reality. Some components of the disaster of 9-11 are an example of this type of intermingling.

The lost ones, or some may call them the dark ones, cannot differentiate between a holographic projection and an actual reality because they have denied themselves the integration of their own spirit.

Hence, they have no idea that there are humans who can use their innate spiritual powers to differentiate between a holographic and a true, reality. Since these lost ones have no spirit within themselves, they cannot perceive spirit in other beings, or even in other realities.

On the other hand, our volunteers to Earth, meaning those of you who volunteered to leave your higher dimensional Starship or Homeworld in order to take a physical earth vessel on third, fourth dimensional Earth, can easily perceive the frequency of people and situations by observing the percentage of spirit that flows into and through each person, place or thing.

I, Zadkiel, invite you to use your ever-expanding memory to recall a time when you perceived an airplane flying when it was filled with humans. Remember “spirit” in this case does not mean “spiritual.” The “spirit” that I AM speaking of here is the “life force of spirit” that was every human’s first breath when you were born.

Many of you, our grounded ones, have been able to maintain that feeling of spiritual guidance throughout your life. Now, use your imagination, which is fifth dimensional thought, to perceive the “false flag” incidents that have been occurring within your last few decades.

Many of you have wondered why you have doubted that these events were “real.” However, you dared not talk to too many people about your doubts for fear they would think you are “weird.”

However, it is the fact that you are weird, strange, bizarre, and/or peculiar, that allows you to differentiate between real situations that are filled with the spirit of the humans who experienced them and “false flag” holographic projection situations” that are devoid of any “feeling of spirit.”

The dark ones, who created these fearful holographic projections, have lost their own spirit because of lives of “power over others” and “service to self.” Therefore, they cannot differentiate between a holographic projection and a true reality that have been given life via the “first breath of spirit.”

I, Archangel Zadkiel, have been chosen to inform you that the Lost Ones are planning to create more holographic projections with the intention of creating more fear. The Lost Ones, also known as the Illuminati, are very concerned because they are losing control over the very 3D Matrix, the third dimension frequency net, that they created.

They created a 3D Matrix, which serves as a frequency net to assist them to project their fearful illusions into the third and lower fourth dimensions of the humanity’s Earth reality. Unfortunately for the Lost Ones, more and more humans are “logging out” of the 3D Matrix and expanding their consciousness to embrace the fifth dimensional “Spirit” of Gaia.

“How are we logging out?” I hear you ask. The answer is that YOU, the ascending humans, are consciously, or unconsciously, choosing to merge your consciousness with Gaia to better share your spiritual essence with Mother Earth.

Because of your commitment to share your ever-expanding Spirit with Gaia’s elementals of Earth, Air, Fire, and Water, you are logging out of the 3D Matrix and sharing your spiritual life force with the physical body of Gaia’s Earth.

Because of your great contribution, not only is Gaia able to heal many of the wounds that humanity has inflicted onto Her planetary body, but She is also growing strong enough to eject the 3D Matrix from Her planetary body.

The Lost Ones are beginning to realize that if they wish to have a format on which they can attach their wilting life force, they will need to “lift off” with the 3D Matrix. The Matrix is lifting off from the body of Gaia and being transported to encircle another, lower frequency, planet, moon, or asteroid.

This information may seem very unusual to many of you, but more and more of Gaia’s human inhabitants are realizing that something is very different. The animals, birds, insects, fish and other members of Gaia’s Earth, are well aware of the great change that is occurring.

Communicating via separate words being strung together to create a communication does not encumber these non-human members of Earth. Instead, the non-human beings on Earth never conceived themselves as being “separate” from Earth. Therefore, their animal “spirit” is in constant communication with Gaia’s planetary spirit.

Fortunately, more and more humans are “returning to the land” and living from what they grow on the land. This expanding trend is occurring because the 3D Operating System, which was largely created and ruled by the Laggards, Dark Ones and/or Illuminati who had made their own homeworld uninhabitable and came to Earth long ago.

For eons, these lost ones ruled Gaia’s Earth, but NOW the Spirit of the Higher Light is flowing into Gaia’s planet. This Higher Light is awakening humanity to the extent that more and more humans are remembering their true, Multidimensional SELF.

As humans remember that their essence is NOT limited to their third dimensional earth vessel, they regain the inner-power of their Spirit that had become lost to them during their many incarnations of “looking UP” to communicate with Spirit.

As you, our dear volunteers to take an earth vessel within this NOW, remember to “look IN” to communicate with Spirit, you will discover your innate Wisdom, Power, and Love.

Your innate Infinite Wisdom, Multidimensional Power, and Unconditional Love will guide you to easily differentiate between the illusions of the 3D Matrix and the Truth that is stored within the Core of Gaia. As you remember to look IN, rather than UP for your personal, higher guidance, you will also remember to look IN to the Core of the planet to communicate with Gaia.

The Dark Ones created “religions” in which “GOD” was far away UP in the sky. People had to “go to a church” and talk to a trained human in order to communicate with this separate God that was far away. Then, humanity began to believe that GOD was UP above them, rather than deep with IN them.

Therefore, they served a superior God rather work with the ONE Spiritual Force that was the Core of ALL life. When God was far away in Heaven, humans could “get away with power-over-others.” In fact, most of the leaders were based on power-over-others.

Since people believed that “God” was far above them and had power over them,” they accepted that they were weak and needed a “bigger person” to guide them. However, it is the NOW for humanity to remember that their connection to the higher dimensions and spiritual guidance is not UP.

I, Zadkiel, am the Archangel of the Seventh Ray of Ascension. This ascension guides you beyond the illusions of the physical reality. The Seventh Ray is the Violet Ray of Transmutation. The difference between transmutation and change is that “change” can occur within the same frequency of reality as that which you are changing from.

On the other hand, transmutation is not just change. Transmutation is the ‘stepping up in frequency” of any person, place, situation or thing. One can change from one third/fourth dimensional house, job, desire, and/or communication, to another third dimensional situation and remain within the same time/space format.

However, when one transmutes a situation, place, or their self, they can remain in the same situation, but they will experience it from a higher frequency of perception.

Please remember that we are your Angelic and Galactic friends, family and guides, who resonate beyond your third dimensional time and space. Therefore, we are always available within the NOW of our ONE to assist you.

All you need “do” to call us is to open your spirit to our unconditional love,


Blessings from Archangel Zadkiel
Posted by Suzanne Lie at 9:45 PM