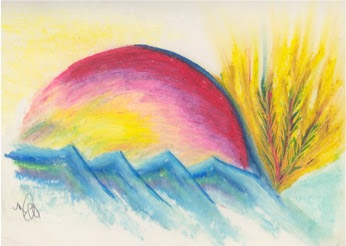 I found something that I wrote in was my journal. It was a way I was given many years ago to release guilt. This process was one in which I used a small square, not round, table on which I placed a symbol for each of the four elements.

Each of the elements represented would be in the North, East, South, and West corners
I lit the candle, used the lit candle to start the incense, put water in the glass, and arrange the clay pot in one of the four corners.

After I had meditated on releasing guilt for about five or ten minutes.
I then, blew out the candle, snuffed out the incense, poured out the water, and gently tapped the clay pot. I also took a moment to write down my process. Then, I went about my day.

The next day, I came back around the same time, and changed the positions of the representatives of Earth, Air, Fire, and Water to a different corner of the North, East, South, and West. Lite the candle/fire with a match, lite the incense/air with the candle, arranged the clay pot/earth and put fresh into the container/water.

I then, sat in front of the table and wrote a short sentence to release my guilt.
I did this ritual for 7 days. Then I cleared every thing off and put it away. I was surprised how profound that simple ceremony was.

Since then, I have given that “releasing ceremony” to many people, and they all agreed that the process worked on some very deep subconscious level.

Since we are all going through a major transition in our physical life, it is helpful to honor each of the four main elements that have joined together to create both our personal and planetary bodies. In fact, Gaia wishes to speak with you within the NOW…

Gaia Speaks:
My dear humans,
I am your Earth Mother. I am made of the same elements as you, my human children. Therefore, since this is the NOW of transition that many of you do not remember not asking for, you may perceive the changes within your earth vessel and earth life as some kind of third dimensional failure, mistake, or as something that you should have done differently.

Fortunately, your fourth dimensional bodies are reminding you that this experience has the feel of initiation. An initiation often “feels” as though you have made a mistake, or there was some kind of accident. However, your baseline, elemental self reminds you that what is occurring within your body and your consciousness is NOT a mistake. It is NOT an accident.

You may have to go through a certain, uncomfortable experience several times before you can realize, “Oh This an Initiation.” Initiations are not fun. Initiations often feel as if there is something that you MUST do. You do not want to do this “initiation,” but your Higher Self has sent it to you because I, your Mother Gaia, need YOU to consciously perceive, experience and interact with the higher dimensional beings that are calling you into active duty.

Congratulations dear ascending humans, you have all gone through, will go through, and/or are going through an initiation within the NOW of my Planetary, inter-dimensional transition. Your initiation is actually that you are ready to call in any person, place, situation, and/or element that you have ever damaged, harmed, or hurt in any manner, and to send them Unconditional Love, Acceptance and Forgiveness.

I offer the above “elemental blessing” as an example of how you can clear assist me to clear my planetary body from the baseline of my Elemental Kingdom. You were given the above ritual so that you can begin and/or expand your process by honoring the elements of my Earth body.

I, your Mother Gaia, wish to speak a little bit about initiations in Ancient Egypt. What occurred during the Ancient Egyptian Initiations is that when one was ready for their high initiation, first they went into one of the catacombs underneath the great Pyramid of Giza. They would have only water for the seven days and seven nights that they would meditate within that catacomb.

Some of them go insane; some drink would drink all the water and die of thirst. Some would pace their drinking out and did not die of thirst, some never drank the water and don’t need it because they went into such a state of consciousness that they could go deeply grounded in my planetary core, that they were supported by all my planetary energy fields that they were no longer one individual.

This is when they began their ongoing communication with the higher dimensional beings. At first, they communicated with what was would call their guides, their higher guides, and their higher self. Whatever they called these “guides,” eventually they began to merge with them by filling in the in-between of the Guide and the human.

More and more of the humans on the surface of my planet, as well as those who reside within my planetary body, are now merging their human self with their fifth dimension and beyond “Higher Self.” Their process begins by recognizing that the being before them is, in deed, a higher expression of themselves.

From my planetary perception there is NO separation. Hence, in between the right and the wrong, the good and bad, and all the 3D polarities of the third dimension, there is no in-between. All life, all reality, is constant intermingling like the ocean or the sky. However, one can only realize that fact when they have chosen to leave all human time and enter into my Planetary NOW.

Fortunately, once humanity’s consciousness expands beyond third/fourth dimensional, time/space frequency, they will begin to live within a reality based on HERE and NOW. This shift into another reality is similar to if you were a child and you suddenly went into a school were everyone at school spoke a different language than you. You don’t know that language, but the other children can easily communicate with you.

Some how you will need to go through some kind of test (initiation) in order to understand what the others are saying. Because the other children can hear and communicate with you fine, they’re thinking that you can understand them. You want to be a part of this new “school,” so you feel like you must go through some kind of class or initiation to learn their language.

There are many of you who are in the first stages of remembering where you came from, how did you get here, and how can you learn to fit in and learn this “other language.” As I move beyond the story and into the truth, I will share with you that the language that you hear them speaking, and that you cannot understand—yet—is fifth dimensional Light Language.

Now, I Gaia, wish to tell you that the best place to learn/remember light language is from   your own higher dimensional self who always speaks light language. However, you are not consciously recognizing that you are actually translating these Light Messages into your 3D Earth Language.

As you all remember to think in a fifth dimensional way, you will get the “proof” that your physical self needed that there is no separation between multidimensional and physical self. As you move into the consciousness of “I Am Now,” everything starts to shift.

Then you fall out of that state of consciousness and you are back in the physical world again. One thing that can greatly assist you is to remember to SEE and READ Light. When you are seeing and/or reading light,

Your mental body views the message as mental concepts that may have suddenly flown into your mind.

(In the same manner that your 3D brain create words from what you hear with your 3D hearing, your mental body creates concepts from what is perceived via your fifth dimensional perceptions.)

Your emotional body flows through the light symbols that your mental body received and simultaneously created.

(In the same manner that your 3D brain creates words, your emotional body creates bodily reactions, which are quickly translated to “how your body feels” and/or whatever verbal manner in which you learned to “read your emotions.”

Blessings from your Mother Gaia
Posted by Suzanne Lie at 8:14 AM