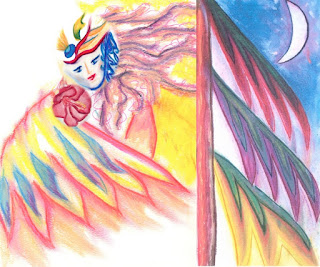 AND RETURNING TO SELF

10-18-12
Dear Arcturians,
Yesterday you sent me some information about meeting with the Galactics. Was I correct in receiving that message? If not, please correct me. If so, please give me more details.

Dear Ascending One,
We know that some of our information takes a while before it can work its way through your wounded ego. We wish to assist you in the final release of this ego, for it will be more and more of an interruption to our transmissions as we share increasingly unexplored topics and units of information.

Therefore, we wish to take you back to when the human was first born and you, the Arcturian, were training to download its circuitry into the form of this tiny infant. Why was this infant, a seemingly insignificant child of a dancer and a musician, chosen? Neither parent was awake, nor was the child slated to be special in any manner. She was just a normal, post-war baby in California, USA.

However, the body almost died of crib death at only six weeks. The constitution of the baby was still strong, and her soul still over lite her form, but had not yet entered it. Suzille, the Essence from Arcturus, saw a chance to enter this human form, which appeared to be healthy enough to survive until the Great Shift.

Hence, YOU the Arcturian, entered this form before it expired. There was minimal brain damage from the lack of oxygen, but you were able to repair most of it. The damage that remained was perfect, as the child had to think from her right brain in an imagistic manner.

You, Suzille the Arcturian, entered the form and faced many years of “time” as the grounded one worked through human issues of life on a hostile planet. Fortunately, the survival was so difficult that the human element had to surrender her fears to you, the Arcturian. Thus, at a very young age, you were her comfort and insight. However, the child did not know to whom she was surrendering.

Now you, the Arcturian, and the owner of the form have become ONE Being. Suzanne has become Suzille, and Suzille is returning Home to the higher dimensions of reality. Yet, the wounded ego still battles doubt. Because of this, we recommend that Suzille take the helm of this earth vessel in every way. How will this exchange occur?

This question is important, for the “changing of the Guard” of the earth vessel is a vital component of ascension. Of course, as with every process, this release of all ego can only be accomplished by total surrender.  Your Arcturian SELF will not abandon the small earth vessel that it inhabits. Nor will it abandon the wounded ego that suffered through many years of deep depression and over-whelming challenges?

Do you remember how these releases allowed your human element to surrender these portions of wounded self to a higher frequency of reality, so that the earth vessel could be more fully inhabited by light?

Now you, Suzanne and Suzille, can release the last wounded portion of the human identity, the wounded ego. Just as Suzanne sent her children off the college knowing that her relationship with them would never be the same, you now send the wounded ego off to the higher Mystery schools of Venus. On Venus, this persona can be fully healed and transmuted into light.

Observe as the vapors of the ego, in fact all ego, drifts away? The one who suffered, but always continued, the one with courage and tenacity to fulfill her obligation to Earth in order to ascension, as well as many other traits, thoughts and emotions have been transmuted into the frequency of the fifth dimension and beyond.

These components of the human ego will remain with you, the SELF, because they have risen in frequency to the ever-escalating resonance of your true, Arcturian Nature. You, our Arcturian family member, have assisted the wounded one for 65 years. Now, much of that wounded has been transmuted and will remain in form for the final duties of ascension.

However, the frequency of ego that cannot survive the frequencies of reality to which you will return is being lovingly surrendered back to the ONE. In reality, without Suzille the Arcturian, the form would have expired long ago. Because the human element of the earth vessel was able to perceive the Arcturian, she could allow her Arcturian constituent to repeatedly heal her form of clay.

Suzanne now merges her human, clay form with her Arcturian body of light. Just as she sent off her children to college, she now surrenders her wounded ego to the Mystery Schools of her beloved Venus. YOU, human and Arcturian, can FEEL the unconditional love that escorts the wounded ego to Venus.

YOU both have embraced all the loving, human relationships and will happily continue them. However, YOU will no longer be encumbered by the wounded ego who was created by myriad incarnations. What remains, as the inhabitant/creator of the earth vessel is YOU, the composite of human and Arcturian.

YOU are the one who first took a form on Earth at the close of Atlantis. YOU are the ONE who has visited your other Galactic realities during meditations and in-between incarnations. Hence, YOU are the one to close this cycle of birth-death-birth to return to infinity.

Now, with the surrender of the doubts, insecurities and limitations of the wounded ego, all karmic debts are paid and all cycles are completed. Thus, YOU, Suzanne/Suzille, are FREE to assist others to release their wounded ego and return to their SELF.

Do you have any questions?

I have NO questions.
I am ready to meet with the Galactics NOW!

10-19-12
After I wrote this message I had to rush off to work. I worked a full day and somehow drove home. I was exhausted beyond words, went to bed early, slept for ten hours and dreamt of being on the Ship. When I awoke, I was still exhausted and wondered if I should share this message.

However, when I read the message again it was clear that, even though it was deeply personal, it is what we are all doing. We are all coming into our true SELF and our new reality. Therefore, we need to clear our unconscious of ALL elements of our self that are unable to transmute into the fifth dimension.

10-20-12
This day was also very busy. By the time I stopped, I could not enter my handwritten message into the computer. I felt my wounded ego try to come back into my consciousness, as third dimensional habits are strong and persistent.

Therefore, I did not force myself to type this message and totally relaxed. When I surrendered to the NOW, I could feel a strength and power inside that I had not ever felt before. At the same time, I could feel the habit of ego trying to manipulate my thinking.

10-21-12
Even as I type this today, the day of releasing all that stands in the way of our ascension, I can still feel the habit of the wounded ego wanting to get my attention. Therefore I say,

“I love you Ego. I am sorry that you became so wounded. You protected me again and again by guarding my Inner Core. For that, I shall always be grateful. Goodbye for NOW, dear wounded Ego. I know that Venus will heal you forever.”


RELEASING ALL DARKNESS FROM GAIA