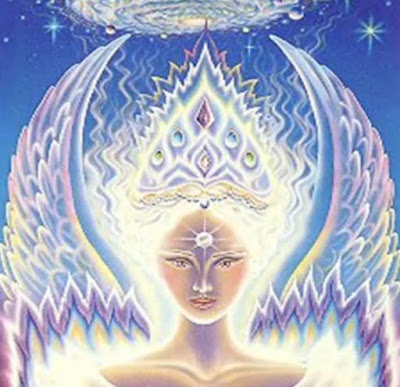 There are many other versions of our own self that resonate to the higher frequencies. However, most humans are not "yet" aware of their own higher dimensional frequencies of their own human self.

In Fact, many humans are not aware of the higher versions of their "human" self because they resonate to the frequency of the Third Dimension.

Fortunately, more and more third dimensional humans are expanding their own  perceptual field by meditating and assisting other beings to expand their perceptual fields.

Of course, most 3D humans do not think in terms of a "perceptual  field" that expands beyond the third dimensional waking perceptions and/or their third and fourth dimensional, dreams and meditations.

Fortunately, there are more and more 3D humans who are expanding their time in meditation, which often allows them to recall some  memories of the true Galactic Beings that they really are.

These expanded perceptions are resonating to the fourth, fifth, sixth and beyond frequencies of reality. In other words, more and more humans are beginning to expand themselves beyond the limitations of the physical third dimension.

Therefore, more and more 3D humans are making conscious contacts with their own higher dimensional expressions of SELF!

Because these waking and/or sleeping experiences are becoming more and more common, it is much easier for those who are expanding their awareness of the higher dimensions to communicate with others about their higher dimensional experiences.

It is in this manner of "sharing" that even those who could not believe in higher dimensions and higher dimensional beings, are starting to share their experiences with other 3D humans.

As these higher dimensional experiences are shared with others more and more, they will not be so "weird"or even "unusual." In fact, it is then more and more likely that people will begin to wonder, sense, dream about, and even share, their experiences that are beyond the "normal" third dimension.

Then, slowly, or maybe quickly, more and more people we want to share their inter-dimensional experiences.

Then, instead of talking about what is wrong or frighting, people will begin to talk about their wonderful dreams, communications and/or memories of the next frequency of reality that we are preparing ourselves to fully except!