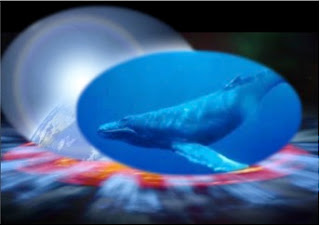 The Arcturians through Suzanne Lie
Dear Arcturians,
Can you comment on the vision I had of a huge whale with wings who was deep inside the ocean?

Dearest Suzille,
We are happy to answer these questions for you and for your readers. Our message begins with, “The shift is NOW, but you can only perceive it when your consciousness resonates to the fifth dimension and beyond.”

We do wish to remind you that when we say “NOW!”  We are NOT speaking of the 3D NOW in which it is the “time to do something.” When we say “NOW,”
we mean it is the NOW in which you can leave the illusion of time.” It is within that NOW that you can experience the Shift because your consciousness is calibrated to the fifth dimension.

The forces of darkness that have worked against Gaia’s ascension since the fall of Atlantis have lost their battle to control Earth. However, the “cleaning up” process will take more 3D “time” to be completed.

Fortunately, many of our volunteers are opening portals to the fifth dimension, and holding these portals open. Then, the higher frequency light streaming through these opened portals can greatly assist those who are cleaning up the lies and dominations that have invaded Gaia’s planetary body since the later days of Atlantis.

It is when this connection is made that you will begin to increasingly interact with all the higher realms. The whale being at the top of this writing is representative of your deepest unconscious self.

The challenge of this deep self is that this magnificent being can only communicate with you when you totally surrender to this experience. Also, if and/or when you lose contact with the whale being, you will need to relax into, and then enter a circular light that precedes another message from the “whale.”

We hear you ask us to remind you what your unconscious “whale being” in the deepest ocean of your unconscious has told you. We will assist you to remember. Look now at the whale being’s huge wings. Of course, the wings were not of feathers, but of the same skin as the rest of his body.

Light Language originates in the fifth dimension and beyond. Your third dimensional brain is not calibrated to download that frequency of information, but it can capture the pictures and feelings.

Light Language is much like dream language. Therefore, if you, the grounded ones, document your dreams when you awaken, it will create a strong foundation for understanding the Light Language that accompanies all of our crop circles and “channeled” transmissions.

We will now go into detail about the images that accompany your light language messages, which are actually  messages that come through you rather than just to you:

You will then need to totally surrender to that light and free your self of ALL expectations. Listen as you hear the huge whale reminding you to “Let GO.” Once you fully connect with the light, it will become very clear that the whale has huge wings where once it had relatively small flippers.

The deep love streaming from the whales is now surrounding you, and  is sending you the love of the truth. Whales live within the truth and send it into the dark waters that surround them. Many humans on Earth, have experienced being a whale on Sirius B. Thus, many of you can identity the Whale as YOU.

The message to you and through the whale is, “If you can find the light hidden within your deepest unconscious, you will be able to connect with a deep wisdom within that you have likely ignored.”

“For many years humanity has thought of the unconscious as a place where negative secrets are stored. Your interfacing with the Whale assists you to remember your unconscious, consciousness of Wisdom, Power, and Love. This Unconscious Consciousness sweeps deep inside your inner “Ocean of Emotion.”

We the Arcturians have sent out the above message many times. However, it is more personal, and has greater meaning when you see it, feel it, surrender to it and deeply experience this message through your own inner light.

Unfortunately, too often your innate Inner Light is hidden in the deepest oceans of your unconscious mind. You have been indoctrinated to believe that if your share these sacred secrets, that people would think that something is “wrong with you.”

You have been told again and again that you need to get better, that you should be mortified if you do something “wrong,” or if your body or looks are “not good enough” if your body is not like a movie star’s body.

This subliminal information riddles your third dimensional media by creating invisible, negative thought forms. Because these negative/controlling messages are subliminal, they are often stored in you unconscious mind.

It is for this reason that we, your Galactic Family, are reminding you how to read Light Language. Light Language is beyond your third dimensional mind’s ability to perceive.
Therefore, it is often stored in your unconscious along with that which you have repressed.

Yes, it is true that you have repressed past negative memories. However, you have also repressed memories of very positive events that you know you could not share with others, such as your meeting with Higher Beings or visits to our Starships.

Fortunately, a very “wise whale” is developing within your conscious and unconscious mind. Once you have remembered how your unconscious mind/body reads Light Language and other higher dimensional communications, you have an instant antidote for the negative subliminal messages that litter your third dimensional reality.

To read Light Language, you must first recognize the “feel” of it, as well as how to discern it from negative symbolic, nonverbal language—such as within commercials. Many commercials make you feel “not good enough” and that “you need to improve.”

In fact, this Love and Light is the marker that proves that it really is Light Language that is streaming into you from the higher dimensions. We, your Galactic Family, are continually sending you Light Language messages.

However, the flow of our message through your body can bring on an initiation. An “initiation” usually arises when you are ready to shift into a higher resonance, but your unconscious mind must be cleared before you can fully accept your well deserved Multidimensional Gift.

Our channel has not been able to verbally transmit our message because she “lost her voice.” In reality, she did not lose all her voice. She just lost the tones “in between” the higher and lower frequency. For example, Suzille’s throat could express the high and low frequencies of sound, but not the frequencies “in-between.”

After her Morning Meditations of the Whale, her voice slowly began to recover and she began to be able to experience brief moments when the “in-between” sounds could be expressed. It is then that her “voice would come back.”

In other words, her body received the Light Language message of:
Remember, in order to be Fully Connected with the higher frequencies of reality, you will need to join your conscious self with your super-conscious self, and then add your unconsciousness self to ground your energy field in Gaia.

Since Light Language arises from your highest expressions of SELF and penetrates deep into your unconscious self, it is best perceived as if you have fully connected your super-conscious self with your un-conscious self.

As your consciousness expands into higher frequencies of light, you will consciously perceive any darkness (which is actually fear) that you tucked away in your unconsciousness mind.

Perhaps you hid that darkness, fear, negative behaviors, and old wounding in your unconscious mind because you did not believe that you could face them.

But, fortunately, as your inner light grows brighter, you will have more and more courage to consciously perceive and heal the dark secrets you have hidden in your unconscious self.
Then, once this illusion of darkness is healed,
your innate Wisdom, Power and Love are revealed.

This Wisdom, Power and Love liberates your innate “loving whale being of wisdom, power, love and light.” This YOU was always within you, but you to hide it in your unconscious in order to protect it from a world that could NOT believe in your inner whale or in your inner self.

As you heal and honor your past, you will have enough faith in your self to live in the NOW of the ONE that your inner whale has revealed.

Within the NOW of the ONE you are fulfilling your reason for incarnation.

Within the NOW of the ONE you are free of past disappointments and future fears.

Within the NOW of the ONE you are the best and highest version of your SELF!

Within the NOW of the ONE, you no longer need to compare yourself to who you once were, or who you should be in the future.

Within the NOW OF the ONE you are free of the polarities and illusions of the third dimensional world and are able to perceive the Multidimensional Light of the ONE that is flowing into your life.

Within the NOW of the ONE you are HOME and HOME is where you have always been.

Please join us in that NOW, for you are ONE of US, your Galactic Family!
The Arcturians