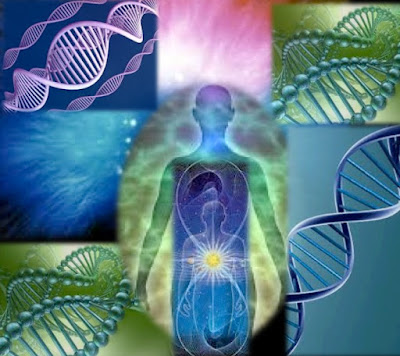 I have talked about this important research before. Therefore, I have now made a “study sheet” for it. It is the NOW in which the higher frequencies of light are entering our Pineal Gland and coursing through our bodies to activate this “junk DNA,” which is actually the key to becoming our Lightbody SELF.

The below research has “disappeared” from mainstream literature. Thus most of us have been denied this important information because the powers of darkness have taken a chokehold on most of our media. Therefore, we must go into the past the find our future:

In 1987, at the same time that the holographic research was taking place, Malcolm Simons, M.D., immunologist, and founder of Genetic Technologies in Australia, could not believe that evolution would be so wasteful as to make 97 percent of our DNA junk.

He discovered an order in this supposed “junk” DNA, and he believed that if there was an order, there was likely a function, as well. Now, as the human genome has become more accessible to scientists, even more researchers have begun to scrap the notion that 97 percent of our DNA has no purpose.

Richard Gerber, M.D., who practices cardiology, internal medicine, and interventional cardiology in Salinas, California, concluded in his book Vibrational Medicine that matter, including human cells, is actually “frozen light” (light that has slowed down in vibration and become solid).

Gerber’s book came out in the same month that a German book entitled Vernetzte Intelligenz, by Grazyna Fosar and Franz Bludor (translated by Barbel Mohr), was published. In this book, Fosar and Bludor documented extensive research done in Russia revealing the amazing relationship between junk DNA and light.

In the 1990s, the Russian researcher Vladimir Poponin developed a series of experiments to research the patterns of light in the controlled environment of a vacuum. Under the vacuum conditions, the light fell into a random distribution.

He then placed physical samples of DNA into the chamber and found that in the presence of genetic material, the patterns of the light particles shifted.

The new pattern resembled waves as they crested and fell. This pattern remained even after the DNA was taken away.

Poponin believed that the DNA possessed a force that somehow influenced the light photon, even when the DNA was no longer present. This phenomenon was called the “Phantom DNA Effect.”

Russian biophysicist and molecular biologist Pjotr Garjajev and his colleagues, who were also doing junk DNA research, believed that the patterns of light in the vacuum caused by the DNA were actually magnetized wormholes. Somehow the DNA transformed the light into wormholes, which were still present after the DNA was removed.

These wormholes are the microscopic equivalents of the so-called Einstein-Rosen bridges theorized to exist in the vicinity of black holes (left by burnt-out stars)—tunnels through which light information can be transmitted outside space and time from different areas in the universe.

Poponin, Garjajev, and other Russian scientists think that our junk DNA attracts bits of light information and passes them on to our consciousness. This inter-dimensional passage of information is titled “hyper-communication.”

These scientists surmised that energy from outside of space and time flows through these wormholes, and that the wormholes were activated by the existence of the DNA.

If it was the DNA that actually opened these wormholes, is it possible that our very DNA is capable of receiving the subatomic light particles that make up the matrix of the “super hologram”?

Russian researchers have also joined with linguists and geneticists to explore junk DNA. They found that
junk DNA follows the rules of our human language.
According to them,
our junk DNA serves as data storage and communication.

In exploring the vibrational behavior of DNA, Garjajev
and his colleagues have found that
living chromosomes function just like holographic computers.

These researchers modulated certain high-frequency patterns onto a laser ray to influence the DNA frequency
and thus the genetic information itself.

Since our junk DNA and language share the same structure, no DNA decoding is necessary.

One can simply use words and sentences of human language to influence the DNA.

Garjajev believes that junk DNA in living tissue will always react
to language-modulated laser rays and even to radio waves,

if the higher frequencies are used to project the message.

Garjajev’s research explains why affirmations, hypnosis, and the like can have a strong effect on humans and their bodies.

They have further stated that
the higher the individual’s consciousness,
the less need there is for any type of laser device.

The holographic and junk DNA research reveals that:
humans are basically receivers floating through a sea of frequencies of light patterns.

We choose to perceive,
and hence we create our reality from the myriad possible realities
that the super hologram projects
from beyond time and space –Meaning fifth dimension and beyond
for us to:
receive through our personal portals (the wormholes).

Once we receive this light information,
we process it through our holographic brain
so that we can project our picture of reality into the physical world
to be contributed to the collective and planetary consciousness.

In this manner, we are all ONE being
receiving ONE message
through many different (personal) portals.

When we expand our consciousness
and allow the light of the ONE
to enter our earth vessel through our personal portal,

all polarities slowly merge into the center point/zero point of the ONE.

The good/bad polarities then become experiences on planet earth,
and the love/fear polarities become

Love, especially unconditional love,
is the glue that unites us with all life,

FEAR is merely a warning message
that we have lost contact with our Multidimensional SELF.

While our Soul/SELF is captaining our earth vessel,
there is no fear for there is no separation from the ONE.
THUS we can filter IN the many light-filled possibilities to perceive and live.

Through our opened Third Eye in conjunction with our High Heart,
we can differentiate between
1)    our unconscious projections from the past,
2)    the realities that we have worked so hard to create,
3)    and the FLOW of the ONE to which we can surrender.

Once the fire of our kundalini has been ignited in our first chakra
and rooted deep in Gaia, WE can

balance our emotions,
direct our thoughts
unlock the portal of our heart to
awaken our greatest creativity,
clear our vision and
open our Third Eye.

Hence, we are now able to:
pull in a greatly expanded spectrum of
multidimensional light/information.

Gaia, also a multidimensional being,
has shared her experience with us,
we can blend our personal and planetary essence,
chakra by chakra.
SEE

With the expanded light entering our consciousness and form,
we can also:
upgrade our holographic perception
allow more light into the projector of our earth vessel
—all the way into our junk DNA.

We have been downloading new upgrades into our brains,
but at some point the old computer is too full
to accept and translate it all.

Therefore, we are now:
Downloading a new Operating System into our brains
From our Multidimensional Minds
with more memory
and faster processing.

Fortunately, we don’t have to go to the store to buy this new system,
it is already in our junk DNA awaiting activation
from the expanded frequencies of light
that we can now consciously perceive and accept.

are fully awakened by the Rise of Kundalini,
and the integration of Soul/SELF into each chakra
so that we can accept a wider spectrum of light
into our daily consciousness.

It is through
receiving,
interpreting,
and integrating
this expanded light
into our daily lives and projecting it out into our reality
that we attain our full illumination
and perceive/become our TRUE Lightbody SELF.

Fortunately, as more of humanity awakens to our SELF
and allows the flow of unconditional love from the ONE to enter our hearts,
we will realize that each one of us
Is creating our planetary as well as our personal reality.

As well as follow our perceptions into the quantum world to”
see,
feel,
hear,
and touch
the sub-atomic particles that connect all life.

With our solar consciousness,
we can perceive our planet as a member of a system.

With our galactic and cosmic consciousness,
we can travel inter-dimensionally
to experience realities in other galaxies and dimensions.

When we live in the center current of the Flow of the ONE,
we can share our expanded reality with others.

It is through being that expression of our greatest SELF
That we can BE ONE with all life!