Looking Back Into Your Future--Arcturians and Galactic Family

Looking Back Into Your Future 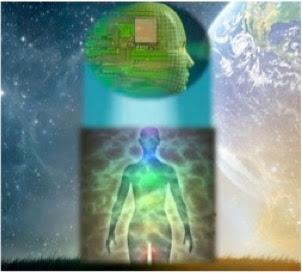 We are here now, within your Portal of Light that is within YOU. We, your higher dimensional expressions of SELF have come into your awareness, into your consciousness and into your daily life.

Therefore, we—the members of your Multidimensional SELF—see what you see, hear what you hear, touch what you touch and smell what you smell. We think what you think, feel what you feel and know what you know.

We, the members of your Multidimensional SELF, have made this decision to join you in this manner so that we can personally escort you into the higher frequency of your consciousness, your perceptions, across the “threshold of illusion” and into your fifth dimensional SELF.

Your fifth dimensional self resonates to a Lightbody, so you cannot wear that form while grounded in the physical world. However, you can feel that body of light stirring within the Kundalini force that is awakening and beginning its journey up your spinal column.

As your innate Lightbody SELF—who rests within the power of your inner Kundalini energy field—begins to stir, your consciousness slowly or quickly expands to encompass the higher frequencies of reality that have always shared your physical world.

You see, beloved ones, your Multidimensional SELF is not UP above you, but deep WITHIN you. Hence, only your consciousness has been lost to the myriad illusions of the now fading third dimensional matrix. YOU, your Lightbody SELF, has always been within your physical form.

Unfortunately, as long as your consciousness was limited to the physical world, you could only perceive your physical body. Then slowly for some, and quickly for others, your fourth dimensional consciousness began to awaken. You started remembering your dreams.

In fact, you started remembering all the wonderful things that you knew as a child. However, the “adult” who lived outside of you told you that that was “just your imagination” and that you should buckle down and do your 3D chores, go to your 3D school and attend to your 3D life.

But then, you had dreams about another world, another reality that was sweet and loving. This reality was kind and fair. Best of all, this reality of your imagination led you to beautiful realities filled with love, enjoyment, deep camaraderie, unconditional love, and joy.

“STOP DAY DREAMING!,” you heard. But you did not want to stop daydreaming because you liked that reality much more than the reality that you found outside of your self. So you hid that reality deep, deep inside where no one else would find it.

Unfortunately, as you “grew up”, that hiding place became hidden to you as well. Then you were lost in the 3D illusion. BUT, sometimes, when you were happy, when you were creative, when you were with a beloved friend or pet, or alone in your room or in nature—you remembered.

“NO,” you said to yourself. “I can’t remember this world because it makes me so very sad.” Then, slowly, you began to forget OR you kept this wonderful reality as a secret that was just for your self.

But then “IT” began to happen.

Slowly, or suddenly, what you had pushed deep inside of you where it would be safe, where no one else could say, “That is just your imagination,” that which you had hidden deep inside began to be projected out into your world.

You did not know how you did that very cool thing of projecting the world you so secretly loved out into your world, but you were so joyous that you did not care.

You were so very happy to be able to “live” what you were told was “not real” that you didn’t want to “break the spell.”

Of course, the “spell” was broken many times by the call of duty to the 3D responsibilities, that you now knew were largely illusions that would soon be released. However, by now you had jobs, families, children, and responsibilities.

However, as bit-by-bit, you allowed yourself some 3D “time” to enjoy that which you had formerly hidden, everything began to change. Of course, at first, it was not everything.

At first, it was only that you somehow found your 3D time to remember the secrets hidden so deep that even you forgot them. Yes, some were totally forgotten, but some you could never totally forget.

These “secrets” were where you would begin your return.
But to where would you return?

You did not know and/or you did not care. Some kind of unseen circle was completing in your consciousness, and you were coming back to the “you” that you had to hide so that “they” would not judge you.

You were shocked and joyful that you no longer cared if  “they” judged you.

Because you were ready and able to be YOU, you did not care what “they” thought. You knew you could use another name that expressed your higher self anyway, so you did. Then, the joy and freedom that you experienced by finally “being your SELF” began to totally override all fear of what “they” would say.

You began to wonder just who “they” were and why you had given “them” so much power over your life. Once you realize that YOU had “given” them that power-over you, everything began to change.

The freedom of not worrying about “them” took the lid off that you had forgotten was there. Once you realized that YOU had control of your own choices, the skies began to clear, and a “NEW DAY” was revealed.

Slowly, or suddenly, your perception began to include the higher frequencies of your reality. At first it was your fourth dimensional dreams that spoke to you.

Then, as you began to write down your dreams, another, higher dimensional you began to interpret those dreams for you. As your relationship with this YOU (who we will call your SELF) grew, you began to consult with your SELF more and more.

Sometimes you felt like your SELF was a Galactic Being. Other times your SELF seemed to be an Angel, an Elohim or an Ascended Master.

“NO,” your well-trained ego self cried. “I am not important enough or high enough to be one of these ascended, higher dimensional beings.”

But then you heard an inner voice say, “OH, BUT YOU ARE!!”

Thus, just when you thought you had made one breakthrough to somehow manage to talk to a higher being, you were expected to believe that that higher being was you.

“NO, NO!” your wounded ego cried. “I am not that important. I could not possibly resonate to that high of a frequency.”

Too late, you voiced your self-doubt and opened the doors to an initiation.

Before you could successfully move through the initiation, you needed to realize that your Multidimensional SELF created that initiation because your 3D self believed that something external was blocking your path of ascension.

To release that third-dimensional block, you were called on to release any 3D fears that this situation was “bad luck” or “they did it to me.”

Hence, you had to find, become, and heal the wounded component, or components, of your present, past and/or future physical incarnations who believe he/she was the victim rather than the creator.

You did not enjoy these initiations, but YOU-your Multidimensional SELF-knew that this was to be your final incarnation on third-dimensional Earth. Therefore, you needed to clean up ALL the darkness/fear you had left on the body of Gaia during your myriad incarnations.

Fortunately, you remembered that YOU are a fifth dimensional and beyond being who has chosen to take an incarnation on the body of Gaia to assist Her with Her planetary transmutation.

You realized, that as you cleared and loved free all that you had left behind at the close of any of your myriad incarnations, your personal portal resonates to higher and higher frequencies of light.

For some of you, this was your first incarnation on planet Earth, but your rolled up your sleeves and joined in the ever-growing group of awakened humans who remembered that they came for Gaia.

The only thing that mattered is that YOU CAME FOR GAIA.

Once you chose to assist the planet, your consciousness soared beyond, personal, group, familial, community, country, continental, hemispheric and planetary consciousness and into to the innate galactic and universal consciousness of your Multidimensional SELF.

With your every-expanding consciousness, your perceptions of your self, of others, and of your planet merged into a Unity Consciousness with ALL life. You were going home, and finally you realized that HOME was where you had always been.

At that point your perceptions shifted out of any sense of victimization from any outside source and into the ever-expanding memory that YOU were the creator of your life.

OH, but that awareness brought on yet another initiation.

You needed to create a trial run for your self to see if you could look at a EVERY challenging situation and say,

“I AM the creator of my reality. Why did I create this challenge for myself, and can I remember to constantly and consistently send this “initiation” unconditional love and violet fire?”

We tell you, our beloved volunteers to Gaia, that we are always with you because we, your higher dimensional family, ARE YOU!

We, your higher dimensional family, your courage and unconditional love,
We will keep the light on for you to follow,
The Arcturians and your Galactic Family

(Dear readers, just as you the volunteers to Earth uniting with all members of Earth, we your galactic family are uniting with  all the members of our Galaxy—and beyond.)

Interested in participating in this process in a more involved way?
You can still join the Mystery School Mini-Series. 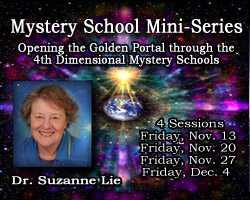 Do you feel called to assist in awakening and embodying the Goddess? You can also still join us for the Goddesses Ascending Gaia series (and receive the first session recording as Gaia shared that we are to assist in the re-activation of the power spots on the planet.) Learn more.