Pleiadian Bk 4- Back on the Mothership Part 1

Back On The Mothership Part 1 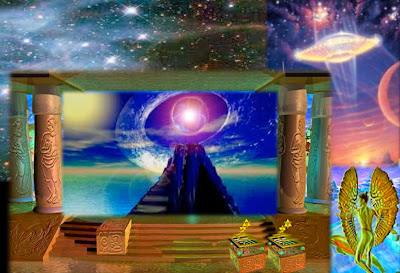 LANDARA SPEAKS:
When I saw the single tear rolling down Landar’s face my heart broke and my mind exploded. I wanted to comfort him and knew that my rage would not allow it. How could anyone hurt my beloved Landar, the kindest person I had ever known. Fortunately, I heard a loud explosion close by so I could distract myself by leading Landar off to the Circle.

Once in the safety of our dearest friends, I settled into the fact that anger would only make things worse. Landar and I were topside because we chose to stay and assist Gaia. As we joined the Circle, Landar firmly took my hand, and I gave him my heart. I was not sure if we would recognize each other in whatever reality to which we were going.

Landar and I looked one final time into each other’s eyes to imprint the feeling of each other onto our Soul. Of course, since we were Divine Complements we would identify each other on sight, I hoped. As I turned my attention to the center of our Circle the only fear remaining was that we would not recognize each other.

With that thought Landar leaned over and whispered in my ear, “I will ALWAYS know you!” My heart filled with unconditional love, which I returned to Landar and shared with the Circle.

As we started to sing images flew across my mind, through my heart and into Gaia’s body. These images were good memories of the wonderful reality in which Landar and I had held forms multiple times with each lifetime lasting as long as we desired.

Our world had not known death or disease for thousands of years. That is until things started going badly with Atlantis. How did our relationship with the people of Atlantis end in a thermonuclear war? There can be no winners in such a war. With that thought, an image came into my mind of a possible reality in which nuclear wars would again threaten the very body of Gaia. I sent unconditional love to that image, as fear or anger would only feed it.

Many other possible realities flew through my mind, assuring me that I would return to Gaia’s planet again and again. However, the details of those realities were lost when I felt the waters moving past my feet. It was then that all thoughts of my self were released, and I totally focused on assisting Gaia.

LANDAR SPEAKS:
The feelings of devastation that our world was violently destroyed were amplified by the deep sorrow that my wonderful life here with Landara had ended. We all knew that Spirit does not die, but only changes form. In fact, many of us had shared many different realities in which we wore very different forms, or even none at all.

However, I knew that when we returned to Earth, we would forget our multidimensional nature. I knew that I would ALWAYS find my Divine Complement Landara, but I also knew that many cycles of “time” would trap Gaia and all Her inhabitants in fear, anger and lack.

It would take many turns of the grand cycle before Earth could stabilize enough for Gaia to begin Her own repair. I saw the many suffering survivors who would be reduced to forms and lives that would be unimaginable in our enlightened Lemurian reality.  Thus, when I saw the flame of destruction pierce the center of our Circle I joyfully imagined it as the great Violet Flame.

From then on, Landara and I sang with one voice as the waters rose up our bodies. The last image I saw was of a distant reality in which the two of us returned to Lemuria’s inner settlement wearing one, united form. Feeling the joy and thanksgiving of that image, I opened my mouth to allow the waters to join my feelings of unconditional love.

In a small bedroom in a mountainside community, Jason and Sandy woke up at 3:00 AM. The room was still dark. They clung to each other trying to remember, as well as forget, the shared nightmare that had awakened them. They had been sharing dreams so often that they both kept a journal of their dreams so they could compare them.

This dream was one they would not write down. It was too terrifying, too hopeless, yet it was also filled with hope. Once they comforted each other enough to calm down, they fell back asleep holding each other as tightly as they could.

Mytrian was suddenly distracted during the beautiful display of Lemurian dancing. For a moment they felt an opening deep within their core anchor to the core of Gaia.

The dancers stopped their dance and the servers stood still, huge platters of delicious food held with one hand. Everyone stopped talking, and a great silence fell across the banquet room.

Within that silence was a deep knowing, at last, that everything would proceed as they had planned. Some began to cry in joy, others stood to embrace their friends and many knelt in silent thanksgiving.

“I has begun,” King RA spoke to the crowded room. “Let us raise our voices in song!”

On a distant starship Mytre and Mytria suddenly became distracted from their work as visions of a rising ocean flashed before them. “It is Lemuria!” they spoke simultaneously.

“Something has changed,” said Mytre.

“Yes,” agreed Mytria. “A cycle has ended and a new one has been born.”

“It is Earth,” they both said as they looked into each other’s eyes.

“It is Mytrian. They have altered the core of Gaia. The infant in their care is growing.”

“We must help them,” they said simultaneously as the joined hands and hearts in deep meditation.”

Call in the group from that final day on Lemuria, including their expression of Mytrian. The Away Teams are beginning to remember. Better yet, they are beginning to talk to each other without that old fear of judgment. We will give another ‘Transmission to Earth’ for our Away Team, as well as to those that can attune to that frequency.”

MYTRE SPEAKS:
Mytria and I instantly sent a transmission to Mytrian that we were beaming them back to the Mothership. We also spoke to RA and RA MU, the King and Queen of Inner Earth’s Lemuria, to contact the members of the Circle of Completion who had chosen to hold a form, physical or lightbody, during this moment of Gaia’s ascension. They would also be beamed onto the Mothership. The other citizens of Inner Lemuria could watch the transmission on their personal or public view screens.

Mytrian, the first to arrive, were filled with joy to be back on the Mothership. They had grown accustomed to their Multidimensional SELF while they were having the novel experience of being on a “possible reality of ascended Earth.”  However, when their multidimensional, composite SELF met with the seemingly separate expressions of Mytria and I, they became greatly confused and started to phase in and out of our reality.

“We are sorry,” said Mytrian, “We are having difficulty maintaining our composite expression while we are in the presence of two of our inner expressions.”

“You will also be meeting your expressions of Landar and Landara,” I told them.

“Yes, we are happy indeed to be back on the ship and meet with you, and hopefully the Arcturian first.”

“Well, she is no longer an infant and appears to be guiding us more than we are protecting her,”  responded Mytrian.

“I see,” spoke the Arcturian, as its aura smiled them.