Pleiadian Return to SELF - Recognition 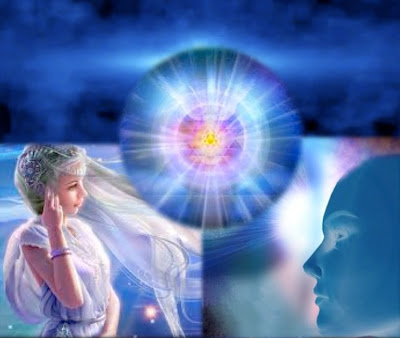 MYTRE SPEAKS:
The following night was a full moon and we were each very busy connecting our Lightbody with the illusions of our physical form. We would maintain the appearance of our physical forms until all the members of our community were able to fully integrate their brain with their multidimensional mind and flash into their Lightbody. The challenge we were facing was to gather together our ever-expanding group in unity consciousness.

Therefore, we telepathically called all those who had fully embraced their ascension to beam to the village and meet on the steps of the village temple. We decided that if we could raise the frequency of this temple, there would be a specific place to further ascension lessons for those who were still attached to their physical illusions.

As ONE mind we gathered together on the steps of the temple and followed our collective inner guidance to form a circle around the temple. None of the fully ascended Pleiadians were even slightly concerned by the arrival of more Draconians, their “enemies” from the physical past. Also, the Lightbody Draconians were completely at peace with a large group of their former enemies, the Pleiadians.

With the release of all victim/victimizer energy from our consciousness we were able to merge into ONE great being of light. We encircled the temple and began to Flow, as Lightbodies flow rather than walk, around the temple. With one mind we began to move faster and faster until we could feel a multidimensional energy field build up around the foundation of the temple.

Suddenly, we heard an unidentifiable loud noise, and the Temple seemed to duplicate itself with a higher resonance temple overlaying the physical structure. Instantly, the frequency of light in the area of the temple grounds flashed into a multidimensional resonance that expanded even beyond our perceptions into the higher frequencies of reality.

The energy field surrounding the temple began to gently glisten with multidimensional light. This light glowed in colors only perceivable only by the expanded perceptions of our Lightbodies. Then, we listened in awe with our clairaudience as entrancing tones echoed off the different hues of light. We listened and observed as the temple put on a glorious show of light and sound, during which our group bonded even more intimately than before.

To our surprise, we were suddenly transported back to the grounds of the Violet Temple and the rest of our group. We remained in our Lightbodies, but were supercharged with an energy field of higher frequency light and sound that merged together to create a constant flow of unconditional love.

Everyone in the camp surrounding the Violet Temple was still asleep. Therefore, each one of us, still joined in multidimensional unity consciousness, walked among and hovered over the sleeping forms. Of course, the children were the first ones to consciously awaken and join the fully ascended children in our group. These beings of purity and innocence went directly to the sleeping ones who had been most resistant to our ascension process.

With their sweet and playful nature the children invited them to arouse into a semi-sleeping state and join our group. The instant that they joined our group they were permeated with our energy field, which felt like deep, unconditional love. Even those who had been the most skeptical were able to surrender into the overwhelming feeling of multidimensional light and unconditional love.

When the members of the group who still carried fear began to fade from our perception, I saw Mytria and Alycia lead all the members of the Violet Temple down the stairs to assist us. I watched as each one of them went to a person who was in need of further healing before they could release their remnants of fear.

I also noted how Franquoix’s lightbody burst into an amplified light when he recognized my daughter Alycia. I also observed Alycia’s recognition as her vision caught the vision of Franquoix’s Lightbody. My daughter and Franquoix were Divine Complements. What a perfect manner in which our group could release all old patterns of fear and war!

With great restraint and dedication to their service, Franquoix remained with our group while Alycia remained with those who needed healing. However, the energy field of loving recognition between them was so intense that it created a feedback loop between our two groups that progressively amplified our unity consciousness.

Simultaneously, those of us who had moved beyond the illusion of a physical reality sent down a physical expression of themselves to walk among those still in need. This method was so powerful that those in need of healing quickly released old patterns of fear and began to expand their consciousness into their expression of Lightbody.

In this manner, we created a beautiful energetic pathway of unconditional love that flowed from the physical illusions of reality into the multidimensional realms of light.  Those who were new to the recognition of their Lightbody SELF hovered in-between the physical illusion and the multidimensional truth in order to acclimate to the feelings of joy, bliss and unconditional love.

The sun rising high in the sky was the signal that our transmutation was complete, and we all returned to our beds to fall into the deep sleep of integration. Even the children willingly “went down for a nap,” as they had been so busy assisting their adults. With a warm smile and a happy heart, I watched as Franquoix escorted Alycia to her room in the Temple.

I knew that now both of us would be going to the Temple when the camp was asleep. I wondered if Alycia and Franquoix would want a ceremony to celebration their reunion. Of course, that would be up to them.

PLEASE SEE COMMENTS FOR DETAILS
Posted by Suzanne Lie at 11:02 AM