1-8-13
TEACHINGS FROM THE ARCTURIAN MOTHERSHIP 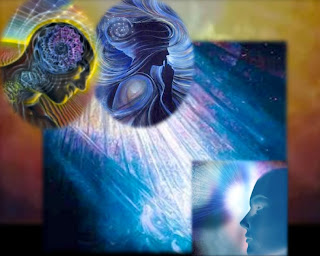 WHERE WE LEFT OFF:
We left off with the Landing Party from the Mothership preparing for their assignment. The Arcturian was saying, “Some of you will remain on the cloaked Ship and bi-locate to your assigned areas. Others will remain on the Ship and send telepathic messages to find those who are open to that type of communication. Finally, others will actually land on the planet, but in a frequency that is out of sync with third dimensional consciousness. Hence, only those with multidimensional perception will be able to recognize your presence.”

MYTRE SPEAKS:
Mytria and I were just about to leave the Briefing Room when the Arcturian telepathically asked us to follow. Mytria and I heard the message as ONE person. However, the Arcturian had beamed away. More advanced training, we thought.

We joined our intuitive forces and sought out the Arcturian's location with our Heart-Mind. With a mutual look of recognition, we held hands and beamed into my favorite Holosuite. Sure enough, the Arcturian was in the Earth Holoprogram, waiting to prepare us for our Mission on ascending Earth.

THE ARCTURIAN SPEAKS:
We want to give you some specific training before you begin your Mission as Pleiadian Emissaries to Earth. Since you both have learned to bi-locate, you have been chosen to assist our Earth Family to remember how to experience multiple realities within the NOW. Furthermore, since you are Divine Complements, you will also be called upon to assist our Earth Family in remembering how to merge with their Twin Flame/Divine Complement.

1.   You will remain here on the Mothership in your highest expression to guide your other multiple aspects of SELF.
2.   You will be in the half-octave-up frequency of Earth's shifting base-line frequency. From this position you will be able to freely move around and assist our Earth Family, but only those of fifth dimensional consciousness and beyond will be able to perceive you.
3.    Simultaneously, you will inter-dimensionally time travel back to the moment in which your ascending planet in the Pleiadian System was facing similar challenges as ascending Earth. In this manner, you will directly experience your Pleiadian ascension in order to clearly remember what was most effective in your world. Once remembered, you can use these ascension strategies to assist the Earthlings.

We stated in the briefing that you would all be getting your assignment after the meeting. You are, indeed, getting your assignment, but training will precede the initiation of your Mission. We will begin our training with the integration of the masculine and feminine expressions of your ONE Twin Flame. Your Twin Flame is also known as your Divine Complement because he or she divinely complements you in every way.

Because of your long interaction with polarized third/fourth dimensional realities, you have had many incarnations of being either male or female. Eventually, most of your expressions in third/forth dimensional form forgot that you had a perfect complement in a higher frequency and/or different reality.

However, as you progress towards your return to the fifth dimension, you begin to lose your need and desire for a polarized expression. It is then that you seek out your Divine Complement, just as you—Mytria and Mytre—sought each other on your Pleiadian planet. The two of you did merge in creating a child, but were separated before you could complete your merging into ONE Androgynous SELF.

Therefore, it is important that you have an in-depth understanding of the topic of Divine Complements, as you will be instructing your earthly ascending humans to merge with their Divine Complement. Because this topic is so very vast, we will have to begin at the beginning, which is Source in the twelfth dimension. We will begin by expanding your awareness regarding your cycle from Source, into your myriad expressions of reality and then back to Source.

THE GRAND CYCLE
Leaving and Returning to Source

Since there is a great deal of Pleiadian DNA in humans, they too are manifest in humanoid form. As you both know, there are many forms that Source uses to serve as a Light Portal through which It can experience It’s creation. Some examples of Source’s Portals of Light encased in form are humanoids, insectoids, arachnoid, cetacean and draconian. There are also Portals of Light in the fifth dimension and beyond with mutable forms of light and/or exist as pure consciousness with No form.

However, since we are now discussing the return of Light Portals that form planet Earth, we will discuss the creation of the Divine Child. A Divine Child is a Humanoid being who will eventually take a form in one of Source’s worlds of form. Not all beings have a gender. But we are focusing on the Cycle of a Light Portal (human) created to be the window through which Source can experience a third/fourth dimensional reality based on form and gender.

When Source in the Twelfth Dimension is moved to create a Portal of Light It calls forth Its First Light Ray of Masculine, non-manifest Essence to merge into It’s Second Light Ray of Feminine, potential form. As the Masculine and Feminine Rays of Light merge into Oneness of the highest frequency of light, unconditional love, a Third Ray, the Light of the Divine Child, is created from the creative powers of that love.

The First Three Rays of Creation

These four Rays of Light represent the Divine Qualities of Source, which were bequeathed onto It’s Divine Child. The birthright of these Qualities will assist the Divine Child to prosper within form and, eventually, return Home to Source.

Once the Light Portal/Divine Child/Human can remember and master the Qualities of the Fourth through Seventh Rays, they can embrace their innate creative Qualities of Power, Wisdom and Unconditional Love imbedded within their High Heart.

The Fourth Ray is the foundation for expansion of consciousness.
The Fourth Ray holds the Divine Quality of Purity and focuses on living in peace.

When you, the manifest Portal of Light and Divine Child of Source, are centered within the Divine Quality of Purity, you can more easily find peace in daily life. The innate Quality of Purity is a “firewall” against any darkness that attempts to invade your form. Within the safety of this firewall, you can begin the expansion of your consciousness into the Knowing that YOU are the Divine Child of Source, and hence a Portal of Light.

This Knowing develops a greater confidence in your innate Purity. This confidence assists you to maintain a state of consciousness that is above interaction with that which distracts you from your true Purity of Purpose. In this manner, a dedication to furthering your Purity of Purpose directs your attention and intention onto that which is loving and pure. This intention creates an increase of consciousness that expands your perceptions beyond the confines of third dimensional limitation and into the higher expressions of your own Divinity. In this manner, you awaken your Individual Consciousness.

The Fifth Ray is the foundation for an exploration of consciousness.
The Fifth Ray holds the Divine Quality of Truth and focuses on Healing and Science.

With the activation of your creative exploration you remember higher expressions of your Multidimensional SELF who consciously, or unconsciously, guide you to discover advanced ways to perceive the world through new scientific methods. Furthermore, your exploring consciousness FEELS the unconditional love of your Higher Expressions and begins to notice how this unconditional love carries a remarkable ability to heal all life. On whatever Path you take you become a leader in your world because you must find the truth.

The Sixth Ray is the foundation for unity consciousness.
The Sixth Ray holds the Quality of Invocation and focuses on Reverence in Daily Life.

When you are centered on the Divine Quality of Invocation, you remember to daily, if not hourly or even moment-to-moment, communicate with your higher expressions of SELF. Through this Unity with your higher dimensional expressions of SELF, you remember the Oneness of ALL Life. Thus, you seek to join in Unity Consciousness with your fellow humanity, as well as with all planetary life. Hence, you have expanded your consciousness into Planetary Consciousness.

Unity with all life expands your consciousness into a deeper experience of your own Multidimensional SELF. Those who once appeared to be your Guides are now realized as higher expressions of your own expanded SELF. Your ever-increasing unity with your Multidimensional SELF expands your perceptual field into higher and higher frequencies of reality. Hence, you become an inter-dimensional traveler. This traveling introduces you to members of your Galactic and Celestial SELF.  Thus you have expanded your consciousness into Galactic Consciousness.

With the full awakening of the Divine Quality of Transmutation, your physical form becomes cumbersome. Your consciousness is resonating a frequency that is too high to be incased in such a dense form. Therefore, symptoms of transmutation begin to occur more and more frequently. This period of change can be quite uncomfortable, as you may feel “crammed into a box that is too small for you.” However, your third dimensional world has been based on resistance.

You have felt resistance against the earth with each footfall, as well as the resistance of your clothing against your skin. You knew you were YOU because you were separate from all that was NOT you. You spent your time doing work, which is resistance over time. However, you are now agitated at the thought of work and individuality is not needed to express your self.

In fact, the YOU that you have come know as your SELF lives in Unity with All Life. You tire of your human experience and are ready to return Home. Of course, this Return will be beyond time, as it begins with your return to the timeless fifth dimension. Furthermore, since fifth dimensional consciousness is focused on Unity, this return begins by unifying your consciousness with your Divine Complement.

Do you now understand the long journey to merging with your Divine Complement? Furthermore, can you better realize how the blending of the Masculine Power of Creation with the Feminine Ultimate Wisdom is vital for the conception of your higher expression of Lightbody?

When your consciousness is trapped in the lower frequency humanoid form, the experiences sent to Source through your Light Portal are blurred by illusion. On the other hand, the Light Portal of your Lightbody is free of illusion and can perceive Source while Source perceives you. Therefore, you can develop an interactive relationship.

Conversely, while wearing your fifth dimensional Lightbody you can perceive your SELF as a component of the Totally Unity of Source. Additionally, you are aware that there are millions of expressions of your SELF on myriad realities and dimensions with whom you are united within the ONE of Source.

(For more information about the Seven Rays see:
http://www.multidimensions.com/Conscious/con_thoughts_7rays.html )

Dearest Divine Complements Mytre and Mytria, return to your joint quarters and prepare for your merging.

“Dear Arcturian,” Mytria and I say in one voice “How can we prepare for our merging?”

“When you have remembered how to prepare, you will be ready to merge. When that occurs, we will be here waiting for you.”

Did I see a twinkle in the Arcturians eyes before it beamed away?