for Part I and Part II of
Pleiadian Perspectives on Ascension 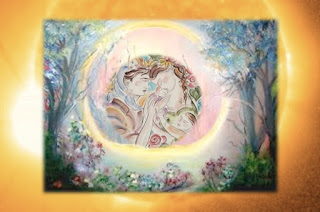 She was not happy with my carrying all our packs and pulling the cart. However, when I reminded her that she was carrying the precious cargo of our daughter, she ceased her complaints. When we reached the hill above our Village, we saw that my worst fears were correct. The Force Field around the Village was up, which could only mean that our position had been discovered, and we were under attack. I realized then that I would not be around for the birth of our child, as I would be too busy protected her home.

Mytria and I looked at each other with great remorse. No words were necessary. We both recognized that we would be apart and that the return to our wonderful home would be postponed indefinitely. Mytria was determined to walk into the Village, and I agreed. I wanted to feel her by my side, as I did not know when I would find her there again. Just before we entered the Force Field, Mytria, the baby and I embraced for a long moment. Our hearts and minds became ONE, as we vowed that the three of us would always be together in our consciousness.

Once I entered the code for the Force Field, and we walked through, we knew that our lives would be altered forever. The Village was in complete chaos with people running around in a somewhat organized fashion. The fear in the air was tangible. Before we could take in the situation at hand, Mytria’s labor pains began and my Commanding Officer appeared from nowhere.

“Mytre, where have you been? We could not contact you, and we need you to pilot a Mission NOW!”

“I must take my mate to the Temple, she is in labor with our child.”

“No! You must come now,” he said as he directed one of the Protectors to take Mytria to the Temple.

“Go, my love,” Mytria said bravely, with tears in her eyes. “We will be fine. Our daughter is coming now.”

My Commanding Officer literally pulled me by the arm, as Mytria was placed on the cart and taken to the Temple. What was left of our life together lay forgotten on the ground. We would have only our final embrace to remind us of what we had experienced together.

Of course, both Mytre and I knew that something terrible was happening in the Village, but we chose not to talk about it. I had even wondered if my pains had been a warning of some kind. I knew now that they were not labor pains. I wondered if they were a message from our daughter. Both Mytre and I knew that she would be very special, as we often visited her together in our dreams. She told us that she was coming to prepare our people for an auspicious event.

We knew that she was correct, as we always saw the Elohim Alcyone with her in our dreams. I did not know if we, our daughter and myself, would ever see Mytre again. He was a warrior, and he was going into battle. I knew that. In fact, I had known that fact almost as soon as we returned to our home after his Vision Quest. I pushed it from my mind a thousand times, but it always returned to remind me to cherish every moment of our NOW. I talked to the Mother many times, selfishly begging that our lives could remain the way they were.

She always said, “Courage my ONE. You are to be a Priestess and your daughter has a great destiny.” That is all She would say. I would call again and again, until I finally tired of my weakness and accepted that The Mother was right. It was then that I began to live in the flow of the NOW. I did not understand exactly what would happen, but I knew that it would happen soon.

Hence, I determined to Unconditionally LOVE every moment that we shared. Once I surrendered into that decision, I realized that I had wasted precious time in worrying and determined to give thanksgiving for every moment that we shared from then on. But then the pains began, and I knew that our daughter was telling me that, soon, we would have to leave our beloved home.

As we reached the stairs to the Temple, I rose from the cart. I would walk up the stairs with my head held high. Jador, the Protector, kindly supported me. As soon as he touched me I knew he was one of those whom I had met within the Core of the Mother. We would all be joining together now, for what purpose I was not sure. As we entered the door to the Temple, I saw another member of our group. Her name was Sirena. Her and Jador were to be my closest friends during our impending transformation.

“We have been waiting for you. Alycia, your daughter, told us she was ready to be born.” Neither one of us questioned that information. I instantly trusted Sirena and surrendered myself to her care. She swept me into the waiting Birthing Room. It was beautifully prepared with violet cloth draped across the walls. There were candles, incense and soft music. Most important, the room was filled with love.

“We have prepared this room to the specifications of Alycia. She was very specific. All of us here feel honored to be among the ones who assist with her birth.” Sirena said no more.

She led me to my birthing chair and began to cleanse my body with a mixture of herbs and clear water. She brushed my hair and pulled it back from my face. Removed my old clothing and wrapped me with a cloth as light as air. This procedure instantly put me into a deep trance in which I had the most amazing experience, which I will try to explain.

As I fell into a deep trance, I found myself again in the Core of the Mother. In front of me was Elohim Alcyone.

“I have created a form so that I can better participate in the ascension of your people,” She spoke directly into my heart.

“Because you and Mytre, who are Divine Complements, were able to both pass your Initiations, your combined frequencies were high enough for me to implant the seed of my form within your body. Of course, Mytre was vital to this implantation. It was the deep, abiding love embedded in his fluid that allow that seed to germinate. Furthermore, because the two of you had so bonded with my land, I was able to protect the growing one within your body. Now, I am here again to assist you with the birthing.”

All that I can remember is that I felt a slow, gradual release of that which I had tenaciously protected throughout my entire pregnancy. Surrounded my the color violet, in both in my inner and outer vision, created a deep calm, and the sounds, smells and flickering candles allowed me to remain in complete surrender. Suddenly, the release was complete, but my journey continued, but this time with Alycia.

Together, as one essence, we met Mytre, as the three of us soared into a reality in which there was total peace, unconditional love and multidimensional light. As we previewed this world, we realized that it was very familiar. Yes, it was the very world that we were now fighting to maintain. However, there was no fighting here, no fear, no war, and no separation. We all had a Core Essence, but it visibly flowed into the Core Essence of everyone and everything. In fact, there were no “things,” as every form carried its own life-spark and frequency signature.

As the three of us, joined into one tight unit, floated through this world, we realized that we were in a possible reality. We, also, remembered that we had vowed to ground this reality into the body of our new planetary home. In fact, all of us who had met within the Core of the Mother had made this vow before we were born. Now, we were being called upon to remember all that we had vowed to do.

Mytre and I realized that our Missions would separate our forms, but never our hearts. I was to protect and assist in raising Alycia, who would also be raised by the Priests and Priestesses of our Temple. Time would be moving very quickly now, and Mother Alcyone would need our assistance, as we would need Hers. My beloved Mytre may or may not return in the form in which I had known him. However, soon, we would no longer be limited to these forms, so any loss would be temporary. I tried to remember that fact during the long dark nights of my empty bed.

Fortunately, I returned from my vision to find Alycia in my arms.

How can I describe the agony of loosing my Divine Complement and the ecstasy of birthing the child of our great love within the same day? Fortunately, it was the intense oppositions of these two emotions of deepest grief and abounding joy that forced me to find a place to live in-between these two extremes. With my every breath, I held Mytre within my heart and protected him with my every thought. Many of our communication systems were down or restricted. Therefore, I was not able hear any word of him for what would be measured to you in years.

It was only our meetings in our dream world and the bliss of raising Alycia that kept me going. I knew that Mytre’s contribution to the ascension of our people, as well as the reality in which we lived, was great. I was extremely proud of him, but I still constantly missed him. Actually, I missed US!
Posted by Suzanne Lie at 1:30 PM