Learning and Remembering
The Inter-dimensional Communication of Light Language 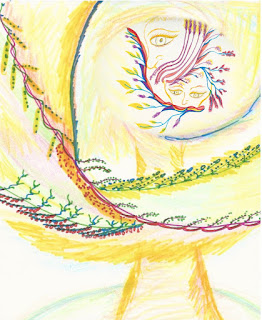 Again, you may find your heart and mind hanging around our higher dimensional group of the Masters, Angels, Elohim. You see, “The beginning of the Beginning” is beginning. We, the Arcturians are always with you and are playing an increasingly different role in what was once known as your “time.”

As the frequency streamers of the emergence of the “fifth dimensional concepts, feelings, and memories” come forth to integrate within your consciousness, you are beginning to release many of your third dimensional emotions and reactions to your Time and Space Operating System.

We know that “you,” meaning any person, place, situation, or thing that is on the Path of Ascension, are coming closer and closer to the experience of consciously perceiving the frequency expansion of your reality into the fifth dimension.

Of course, your consciousness and your physical body have a very deep relationship and a greater interaction than most humans understand. However, please remember that:

Then, once your consciousness has fully accepted the resonance of the fifth dimension, your physical body will begin to slowly transmute into higher and higher frequencies of resonance.

Each of you, according to your desire and experience, will translate these fifth dimensional brainwaves into the language area of your third dimensional brain. At first, you may experience these “messages” via visions, which you will “translate” into messages.

When you “read a picture”, you innately use your fifth dimensional consciousness because a picture can contain many messages at once. “Light language,” which is “fifth dimensional language” is best sent to another via a mental picture which can have many meanings within the same NOW.

When you tune into Light Language, you do not experience separate words lined up individually. Instead, you experience the gestalt, which is the entire message regarded as a whole.

At first, your experience of Light Language may feel very “emotional” because your body FEELS it, but your eyes and ears may, or may not even be seeing or hearing it.

For example, if you read information, you will be able to consciously experience it because you are accustomed to “reading” information written on a page. Your physical eyes have been trained to combine efforts with your physical brain to understand the words that are written before you.

You are also accustomed to “hearing” information via your physical ears. The information that enters your hearing is routed to the area of your physical brain which has been trained (by you) to read. You can also use your motor skills to write or type this message because you have trained yourself to do so.

You may also recognize when “Beta Wave Messages” are routed to your physical body. In this case, you will likely feel a physical urge to “attend” to inner or outer stimuli, so that you can understand the message that this “physical feeling is giving you.”

With practice, you will remember to allow your body to tell you that there is something that you it wants you to do. An example of this would be that your body tells you that it is hungry and wants to eat, or is thirsty and wants something to drink.

You physical body may also tell you that you are very tired, or you are having an emotional reaction to something. As you attend to the many different types of “light language,” that your body is “speaking to you” via the synaptic, light flashes from neuron to neuron, you will learn the “Light Language of YOUR body.”

As you begin to “listen to your body” you will become more familiar with the manners in which your body gives you messages about its needs or your safety. These “silent messages” are Light Language messages that travel through your body via your synaptic firings, waft through your consciousness and activate certain areas of your physical body.

The more you are aware of these incoming messages, the more you will learn/remember how to more clearly identify them and to “speak the language of your body,”

As you feel more and more comfortable with recognizing the different waves of energy, you will be able to more quickly and accurately identify the frequency of reality that is attempting to communicate with you.

Sometimes, it is your “inner child” who wants to send you a message. Other times it could be your inner teenager, a unspoken message from a parent or friend, or even a message from an animal with whom you have a close relationship.

Also, if you enjoy Nature and spend time with the plants, trees, insects, wind, sun, sky, etc., you will learn/remember how to talk with Nature. Those who love to garden can always tell when a plant is saying, “I need water.” or “Can I have more fertilizer?”

Please be aware that you are the “unconscious” creator of frequency waves that you “send out” and/or “attract” to your earth vessel. The challenge is to consciously attend to energy waves, plants, animals and even the atmosphere, in order to speak “light language” with these beings.

“How is this light language?” you may ask.

These forms of inter-species, and even human to human, communication do NOT include using third dimensional words. There is a great deal of information that can be gained and shared within a single human word, but the emotions that carry that word to the receiver of the message is often more important than the words that are spoken.

Ask a farmer or a fisherman how they know what they know about inter-species communication. One of their answers is that they have been taught, or learned, how to deeply observe Nature in order to communicate with it.

What if humans first observed other humans before they began a conversation? That would be a form of Light Language because they are NOT using individual words, sentences and paragraphs that are written or typed on a page. Nor are they using language that is spoken or written in words and sections.

Instead, they are “hearing” and “seeing” energy fields. When you can calibrate your consciousness to the higher fourth and fifth dimensional energy patterns, you will learn/remember how to identify energy fields.

In fact, you will remember how to consciously identify the frequencies of reality to which YOU have CHOSEN to relate and merge your consciousness.

These Inter-dimensional Light Streamers, have been increasingly creating, maintaining, and guarding YOU, our brave warriors, to take an Earth Vessel within this VERY difficult now.

Fifth dimensional Light Streamers are increasingly creating, maintaining, and guarding our Ascending Ones. We, your Galactic Family, are also assisting you to fully remember and complete your assignment of opening and protecting the Fifth Dimensional Light Portals.

There are many portals around Gaia’s Earth, but they can only be perceived via a fifth dimensional and beyond state of consciousness. Therefore, the Lost Ones will NOT have access to these portals, or to any of the ascending ones who are using and/or protecting them.

Remembering your Return includes “remembering to share the story of your own Inter-dimensional experiences. We also ask that you remember that rather than thinking of ascension as a “reality shift,” think of it as a “Frequency Shift.”

It is not that it is your entire reality that will need to transmuted, as that is more than is possible given the current status of your planet. Instead, we ask that you think of this transition as a FREQUENCY SHIFT.

A Frequency Shift is a means by which you can expand your consciousness, and hence expand the experience of your present “Earth Reality.” It is getting closer and closer to the NOW when you will need to choose the frequency to which you wish to resonate.

The “Frequency Shift” is getting closer and closer to the NOW in which you will need to choose. What you may not know, and no one will tell you as they do not know either, is that YOU will need to find the answers within your SELF.

We say “SELF” because we mean your own Multidimensional SELF is the only ONE who can guide YOU. Each of you have a piece of the “puzzle of ascension.” Therefore, each of you are called on to find, hone and protect your puzzle piece so that you can  share and combine it with ALL the other personal, puzzle pieces.

In closing, we the Golden Ones, Arcturians and/or the Ascending Ones, have been coming to the consciousness of humanity more and more.  Therefore, they all want to remind us, those wearing a 3D earth vessel, that:

When you stand before the Ascended ONES at the threshold to the fifth dimension, you will have feelings that you cannot remember having before because within that NOW, there is definitely something different about your Earthly consciousness.

Surrounding dear Gaia, there is a “place” or “energy field” that is beginning its transmutation from the time/space of the third/fourth dimension, and into the fifth dimension of the HERE and NOW.

Therefore, remember your Light Language,
As it is the Golden Path that will guide you HOME.

Blessings from the Golden Ones, the Arcturians and the Ascending Ones

PLEASE JOIN US ON:

When Sue Lie and Lauren Galey will have a Webinar on:

Online Webinars with downloadable MP3 Recordings and Guided Meditations
http://www.acoustichealth.com/drsue13.htm
CLICK Above to Register for Only: $97