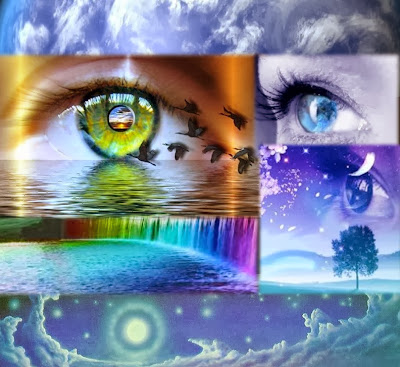 Note from Author
My mind has been going round and round the concept of simultaneous perception and creation. However, my original intention for this article was to write about being a channel. But first, I wanted to ask the Arcturians about a statement I read which was “our senses are projectors rather than receivers.” This statement seemed to somehow address the possibility of simultaneous perception and creation, but I did not know how.
The answer to my first question was so detailed that it became the entire article. In keeping with my original intention I would like to say that when your higher guidance speaks, LISTEN. In fact, that statement is the baseline for all channeling. In closing I would like to add that channeling is actually a conscious connection and surrender into a higher frequency expression of our Multidimensional SELF.

MY QUESTION:
Dear Arcturians, are our senses of perception projectors or receivers?

ARCTURIAN ANSWER:
Your senses are actually both projectors and receivers, but they are projectors first. You project your sensory expectations out into your reality and then you receive the perception of that expectation within that reality. Please remember that your state of consciousness determines what you will perceive.

Thus, no matter what expectation you project, if you are in a third dimensional state of consciousness you will only perceive the third dimensional expression of that expectation. However, your projection leaves an imprint on your etheric aura. Once this expectation is imprinted into your aura it is influenced by your personal history of desires, failures, successes, moralities and limitations.

When the imprint of your original expectation resonates to the frequency of your upper fourth dimensional spiritual body it barely resembles your original desire. If you are in communication with your I Am Presence at the threshold to fifth dimension, you will be able to halt the imprint of this expected perception, as you will realize that your expectation has been invaded by the virus of your past.

On the other hand, if this expectation is of a desire in which you have had great success in your current and/or past/future lives, it will likely move through the fourth dimension with more clarity rather than distortion. It is for this reason that you can easily perceive/create that which is historically (in this life and in other lives) been successful.

Your unconscious memory of success protects your original projected expectation with the power of your BELIEF that you deserve to be successful. Hopefully, the projections/expectations that went awry in your fourth dimensional history of failure and fear do not take form in the physical.

Fortunately, if you can maintain a higher state of consciousness, you can gain a detachment from the dramas of 3D life and realize that you will need to change your approach toward manifestation. So, what is one to do? How can you avoid your long third and fourth dimensional history of failure to expect and receive successful manifestations in your life? The answer is quite simple.

3D Perceptions
On the other hand, your third dimension FEELS like you are limited to third dimensional boundaries of separation between persons, places, situations and things. To rise above this feeling of limitation, you must release your attachment to third dimensional belief that you can only perceive that which resonates to a small range of frequencies on the electromagnetic spectrum.

However, with practice you can remember the FEEL of unconditional love and unity with all life that wafts into and through your higher consciousness. Then you can open your eyes while communing with this frequency of your Multidimensional SELF.

Even though your lower dimensional history is an obstacle to your return Home to the fifth dimension, it was the collection of a “history” that was one of your primary reasons for your first incarnation in the lower worlds. We can say “first incarnation” because incarnations in a time-bound reality can be counted in a sequential, numerical manner.

You, of course knew this before you entered your first incarnation, but having never experienced time, you had no idea of the consequences of having a “history.” In your timeless state you were forever new. Thus, you did not have your myriad experiences in time-bound timelines in which every reality was separate from the others.

In the fifth dimension you experience myriad realities within the NOW. All of these realities are connected and intermingled in the ONE of your flow of consciousness. You are not a person, or a place or even a thing. YOU are pure consciousness. Form exists in the higher worlds, but only as a created package for your light/energy field.

Grass is not a tiny blade of grass, nor is fire a small spark or air and water just one molecule or atom. In the higher worlds a “being” is a multiple term. Your SELF in the fifth dimension and beyond creates and is simultaneously created by the myriad dimensional experiences to which your energy field is attached and/or calibrated.

An Infinite Circle
Higher dimensional realities flow in an infinite circle that never begins and never ends. Perception in these realities is a KNOWING that that which you desire to perceive instantly flows into your awareness. Every perception already IS for there is NO beginning and NO ending in an infinite reality.

Think of yourself walking through a huge store in which everything you could ever want is available for your instant purchase. However, in this store, everything is stored not on aisles or shelves with different forms of identification. Everything in this store is pure potential stored as possibilities.

You do not need to walk up and down the aisles of this store or ask an attendant where you must go to find a certain thing. Everything is everywhere in a formless state of pure potential patiently awaiting an expectation to call this potential into manifestation.

Once you release your bond of unconditional love for this manifestation, it returns to the formless potential that flows within the infinite ONE of the NOW. Since there is no time in this NOW, there is no space, as there is only HERE.

Be HERE NOW
Even in the third dimension, it does not take time to be HERE NOW. It is for this reason that we of the higher dimensions of reality can instantly be within your consciousness in the NOW that you expect to perceive us. Also, since there is no space, we are not separated from you in any manner.

We, your higher expressions of SELF are infinitely HERE NOW. However, if you do not expect to perceive us, your energy field will not resonate to the frequency in which you can perceive us. You see, your expectations also calibrate the frequency of your primary state of consciousness.

If you expect to commune with your higher expressions, your consciousness expands into the fifth dimension because of your BELIEF. If you do not believe you can commune with the higher worlds, you will not expect that communication to occur.

In the same manner, if you BELIEVE that you can perceive the higher frequencies of light/life (as light and life are synonymous at that frequency) your consciousness will remain calibrated to that frequency of reality for as long as you are free of ALL doubt or judgment. Once you feel any doubt or judgment, which are both created by fear, your consciousness lowers into the third or fourth dimension.

In fact, this bleed through of higher light is occurring within your NOW, and is a huge component of planetary ascension. We will go into detail on this subject at a later date in your 3D time. However, you can always expand your consciousness into the fifth dimension and ask us yourself.

In closing, we ask you to be patient with yourself, as you have been trained to believe that you are only physical. Therefore, remember that unconditional love for your self expands your consciousness and attaches you to the higher worlds of your Multidimensional SELF who is eagerly awaiting your communication.

All you need do is BELIEVE in your SELF.
The Arcturians