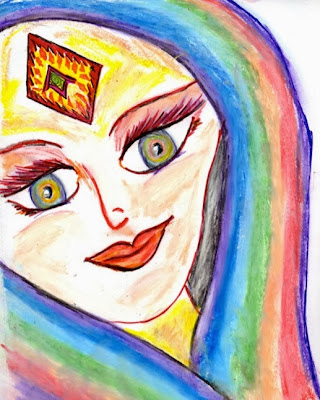 MYTRIAN SPEAKS:
When we were told to go into our core something was triggered inside of us. Spontaneously, without even an intention on our part, the two components of Mytria/Sandy and Mytre/Jason blended into the one being that we heard was called Mytrian. We had barely become accustomed to the merging of Sandy/ Mytria and Jason/Mytre when we suddenly transmuted into Mytrian.

Mytre and Mytria had a similar experience when we/they were flowing with the Arcturian as swirls of light. They also merged into their Divine Complement. But, the addition of the Jason and Sandy consciousness made this merging unique. We heard within that many shifts and alteration occurred whenever a new expression of our beingness merged back into the ONE of our Multidimensional SELF.

Our merging into Mytrian was unique to even Mytre and Mytria because it occurred without with the guidance of the Arcturian or within the safety of the Violet Temple. Also, we were formless when our merging into greater Oneness occurred. Fortunately, even though we were without form, we instantly felt the transition.

This access code was a frequency of light through which that expression could be entered and experienced. We realized that each of these myriad realities of SELF remained “online” in infinity with an infinite possible number of “body/forms” which we could slip into to experience that particular reality. All of these realities, as well as many that we had not yet identified, existed within the flow of the ONE much like drops of water exist within an ocean.

These realities were identifiable by a certain “feel.” We instinctively knew that that feeling/emotion would identify the light code/thought. Then, when we joined the feeling and the thought we would enter that reality. We were tempted to visit some of these myriad realities, but we realized that the infant Gaia needed to be found.

Entering our core was more conceivable when we held ONE consciousness. However, we were still without form, so we needed to find the core of our consciousness. We knew that this core had something to do with our merging into Mytrian and our new awareness of light codes.

If each reality had a light code, then Mytrian must also have a light code. Perhaps we could recognize the light code for Mytrian, as well as for the emerging reality that was as formless as us. Maybe it would be easier to feel of that code first. We focused on our feelings; we found a strange mix of illumination and confusion.

What we once observed as a small glowing light as our only “form,” was now a huge light that was so intermingled with this new reality that our core and the core of this emerging world were ONE. At this point our new expressions of Jason and Sandy became very helpful. They still remembered the experience of “being” a form. Hence, they could remind us to “turn our attention around to look inside.”

This change of attitude provided us with the feeling of centeredness and the thought of “finding the core.” Instantly, we were within what appeared to be a huge crystal. Actually, we were the huge crystal, and heard that this crystal was the Seed of Gaia.

We had not considered that a crystal could be a seed, but as we felt it growing and changing around us, we completely understood the concept. Just as a seed first puts down it roots then, eventually, sends up two small spouts, this crystal was merged into the physical format of Gaia’s earth body.

We looked up to find the crystal sprouts and saw toddler Gaia climbing up the huge crystal in preparation for her birth into fifth dimensional Earth. We could see the toddler within the crystal, hear her giggling and feel Mother Gaia’s strong protective energy. But where was this Mother, we wondered?

“I am within you,” spoke Mother Gaia. “Since you are within my crystal core, you are me as well. Furthermore, within my core is the core of the New Earth that has always resonated to the timeless worlds. Many of my humanoids have difficulty understanding how New Earth can be birthing within the same NOW that it has always existed.

“Fortunately, my plant and animal kingdom are free of time and separation. Thus, they can easily grasp that the multidimensional energy fields of ALL reality combine and blend with that which is still attached to the time-bound 3D Matrix.”

We observed as toddler Gaia slid down the core of the seed crystal and into the embrace of Mother Gaia.

“Dear human ones,” Mother Gaia continued. “I ask you to protect and care for my child. I, Mother Earth, have held a planetary form for longer than you could imagine and long for my expression as a Sun. Yes, just as you have a higher from of a lightbody, I have a higher form of a Sun.

“Sol, the Sun of our solar system which has been my home for millions of years, is yearning to return to its form as a central Sun. Then our Central Sun in the Pleiadian System will burst forth into a Great Central Sun.

"You see dear humans, you are not the only beings who wish to expand your expression of SELF. In fact, there will be a Now in which you will desire to express yourselves as a planet. In fact, the New Earth which you are creating (as well as returning to) is a greater expression of your SELF.

"These are the reasons why I have created an infant version of myself. I, Mother Gaia, was meant to provide a reality in which the time-bound format of separation and polarity could be experienced. On the other hand, my child will provide a reality based on the timeless format of unity and oneness.

"This fifth-dimensional experience of unity with all life within the NOW of the ONE includes not only my offspring, but all the humanoid and non-humanoid galactics and celestials who will share the adventure of ‘being a planet.’”

With Mother Gaia’s words, baby Gaia, sprang from her mother’s lap and scurried up the huge seed crystal.

“Follow her,” cried Mother Gaia. “Please protect and help her to embody her Divine Concept. I must remain here within the core to hold my transmuting planet in form for as long as is necessary for my inhabitants to merge into their higher expressions.”

As we looked up to see Mother Gaia’s child swiftly traveling up the seed crystal, we felt a great fatigue within the Mother.  Instead of following the young Gaia, we blended our consciousness into the Mother.

“Dear Mother,” we said, “We perceive that you are in need of assistance as well. We know how poorly your humans have treated you.”

Mother Gaia waved us off and said, “No, I am fine. Just as my plants, animals and humans are having difficulty integrating the higher light from our Galactic Core, I too suffer from great fatigue. I cannot follow my child into the next reality, as I must heal my wounding just as my humans must heal theirs. Follow my child and care for her as if she was your self. For, indeed, she is.”

With Gaia’s final words, we found that her exhaustion was partially because she had provided us with a form. We were not physical, but we were not yet fully lightbody. Hence, we resonated to the higher fourth dimension. Then, with a burst of unconditional love and multidimensional light Mother Gaia shot us free of the seed crystal and into a huge cavern filled with light.

We knew that we were still within the body of Earth, but Gaia’s love and light had accelerated our form into the threshold frequency of the fifth dimension. Our form of light, for we were still within our united presence of Mytrian, was slowly adapting to the higher frequencies of perception.

At first, the cavern was an empty cave filled with light and a huge body of water. However, as we calibrated our perceptions to the fifth dimension we could see many humanoid beings encircling us and sending us healing love. These beings were humanoid in that they had two arms, two legs, a torso and a head.

However, in every other way they appear very different from the humans that our Sandy/Jason self had known on third-dimensional Earth. For one thing, they were very tall, perhaps ten to twelve feet tall. But, to our surprise, when they realized that their height was a bit alarming to us, they instantly adjusted themselves to match their height with ours.

Another thing was that we could see through them, yet they also appeared to be solid. Also, their heads were much larger than those of the humans we had known. We instantly realized that the larger skull was necessary to house a much larger brain. In fact, their brain seemed to flow beyond their skull and flow from their heads like a cloud of light.

When a being we knew must be a leader as of his/her huge aura, resonance of pure power, vast wisdom and unconditional love suddenly flashed before us, they all returned to their larger forms. However, the “leader” seemed to be the hub of the energy field of communication that circled throughout the group.

“Welcome,” the leader said into our heart. “We see you have come from the Core of the Mother. Please join us as we share our world.”

With the assurance that we would accept the offer, the leader turned and flowed, as there was no walking, across the vast body of water. We followed the leader and the rest of the group flowed behind us.