Back on the Mothership - Choosing a Path 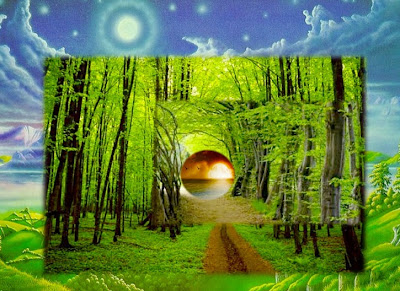 MYTRE SPEAKS:
Franquoix and Alycia did choose to have a ceremony, and every man, woman and child appeared to honor their union. Franquoix, whose passion had always been spiritual, chose to live in the Temple with his bride to share his vast spiritual wisdom. The other Draconians easily integrated into our community, many of them choosing Pleiadian mates. The war was over in our life and in our hearts.

Mytria and I had completed our mission and would return to the Mothership for a bit of R&R before we begin our mission on the Earth of a vastly different timeline. Yet, we chose to stay in our Pleiadian settlement for a while so that Mytria could assist Alycia in being the Keeper of the Violet Flame, and I could give Almon any guidance that he needed. Almon did not even look like me anymore, as he had indeed become his own version of SELF.

In fact, none of us looked the same as we all glistened with lightbodies emanating from our form. Since we were free of time, now on was confused about Mytria’s and my next mission into what was once thought of as a future timeline. Furthermore Shinarius, the divine complements from what we once thought of as the Pleiadian future, decided to stay with us because they greatly enjoyed our adventure. Also, their vast wisdom would be a great asset to our newly transmuted community.

Those from the village returned to the village to re-establish their lives, and the original group who first came to the site of the Violet Temple remained on the Temple grounds. Everyone could now easily beam back and forth between sites, so the distance was not a problem.  The children bloomed into huge lightbodies and became leaders in both the village and the Temple. Little did their parents know that their children had purposely chosen to be born within an era of transmutation of all form?

However, most of our community was happy to assist in establishing our new life on our higher dimensional homeworld. Those that did chose to go to the Mothership would likely return to provide added wisdom and assistance to our newly ascended community.

Finally, it was the NOW for Mytria and I to leave with the Mothership and prepare for our next mission on ascending Earth. There was celebration in our honor, which many crewmembers from the Mothership attended. Of course, the Arcturian and Elohim Alycone were there as well. A great time was had by all, as we shared our many memories and discussed how we had changed.

When the celebration ended, Mytria and I finally said our goodbyes. With a mix of sadness and joy, we beamed onto the Mothership with the last crewmembers. We had wanted to visit the lake, the sacred rock, our cave house, but instead we chose to forever carry those memories in our hearts. As soon as we beamed up to the Mothership we missed our friends and family but knew we would carry them in our heart too.

It would be wonderful to be back on the Mothership, and we looked forward to any instruction we may have to prepare us for ascending Earth. In fact, Alycia and Franquoix joined us for a while so that they could experience the Mothership and receive a few lessons from our beloved Arcturian mentor. They would return to the Violet Temple in the no time of the fifth dimension, as their contributions were important to their newly ascended community.

When Alycia and Franquoix finally beamed back to the Temple, a major cycle of our life closed. Fortunately, a new one instantly began. It had been wonderful for us to share our life on the Mothership with Alycia and Franquoix, but eventually they chose to leave. As soon as Mytria and I had said our goodbyes to our daughter and her Divine Complement we were called to our holoschool.

With huge smiles and light hearts we decided to walk the distance to the holoschool to soak up every wonderful memory. When we arrived, we found that we were alone, but as usual, the Earth nature hologram was playing. We went over to our wooden chairs by the waterfall, and overlooking the valley far below we settled in. With every breath another memory of our many lessons came to the surface of our consciousness. However, this time something was different. Maybe it was that we were different?

As one mind we knew to surrender into that difference, which felt much like diving into a deep pond. We discovered that we were actually within our own multidimensional minds traveling down, down into the molecular structure of what we had known as our physical brains. We were confused by this experience as we thought that our lightbodies had released us from the limitations of our brains. It was then that the Arcturian joined us within our mind and said,

"You will be interfacing with the brains of many earthlings, thus you must remember how to interface your lightbody SELF with the physical earth vessels you will create for this mission."

Yes, we understood that answer, as we had both worked with humans.

"The humans you were guiding,” continued the Arcturian, “have advanced into a higher states of consciousness since you have been away, as did the Gaia’s planetary body of Earth. However, many humans are unaware of this progress because their perceptions are still calibrated to the physical plane. This calibration causes them much confusion and emotional upheaval, as the third/fourth dimensional frequency of Earth’s reality is dissolving into the pure illusion that it has always been.

"Many of the humans do not realize that they are ascended. Also, even the fully aware humans are having difficulty releasing their attachment to physical stimuli to primarily attune to their higher dimensional perceptions. Moreover, humans of a lower density and state of consciousness still hold positions of power and control much of the mainstream media.

“Hence, some people look to the old and dying for advice rather than the new and becoming. One of your greatest challenges will be to re-direct the human’s attention away from old fears and onto the unconditional love that is only perceived through higher states of consciousness."

Mytria and I understood this situation, as it was similar to our experience on our homeworld. We wondered how the plant and animal kingdom were doing with their ascension process.

THE ARCTURIAN SPEAKS:
We are pleased to answer that many animals, and even plants, have easily slipped into the fifth dimension resonance, whereas only a small population of humans has been able to fully make the necessary shift in their consciousness. Because you assisted the members of your Pleiadian community to shift their consciousness into the higher frequency of perception and form, you will be of great benefit to the humans of Earth.

First, you will continue to seek out those who are Galactics in human disguise and assist them to remember their true SELF. In that manner, you will not need to train, but only remind, them to connect with their higher dimensional core. It is the NOW for all the members of the galactic away mission to open the many personal, earthly, galactic and dimensional portals that flow into Earth from the fifth dimension.

These portals are much like currents within an ocean or a river. Once these portals are identified, they can be opened with the light codes that the each member of the away mission carries in their fifth-dimensional, galactic consciousness.

·  Enter their higher dimensional consciousness,
·  Travel into their physical form,
·  Move deep into the molecules and DNA of their form,
·  And into the quantum world of the all earthly form of the 3D Matrix.

The problem with Earth is that there has been so much fear during the 2,000 years of the last Kali Yuga that the greatest force of unity consciousness has been based on fear and victimization. This model has allowed the few to lead the many because the many believed that they are victims.

For example, we Arcturians are working closely with the Pleiadians, those of Sirius A and B, the Andromeda Galaxy, Antares and others. Once our galactic away team, and as many other humans as possible, awaken to their true galactic nature, the power of our galactic unity will be felt by all those in human form. Then these humans will:

Furthermore, their personal DNA portals will also connect them to the body of Gaia.  All of humanity, whatever path they choose, has personal two-way portals of light within 97% of their DNA. This DNA is currently being activated by the higher frequencies of light that are entering Earth from the Galactic Center. This 97% DNA, which we will call “Multidimensional DNA,” holds the secret to transmutation into a higher frequency of form, as it is a two-way receiver and emitter of higher frequencies of inter-dimensional light.

These light-codes are much like locks that can only be opened by the correlate frequency of consciousness. Hence,

·  As each human resonates to a higher state of consciousness,
·  They can receive and integrate higher and higher frequencies of light,
·  Which can open higher and frequency light-codes of information.
Once these codes are opened they will be free to intermingle with Gaia’s biosphere and body.

This wall of darkness sucks in the fear from the Gaia’s inhabitants then rains it back down onto the Earth. However, with the myriad portals of light opening through the Lower Astral Plane, more and more inhabitants of Gaia are gaining access to the higher light and loving information beaming through these portals. Furthermore, any darkness/fear that enters the portals of higher light is instantly transmuted by the unconditional love that fills these portals.

The path of fear and isolation:
·  Negative thoughts create fearful emotions, and fearful emotions create negative thinking
·  Hence, negative thoughts and emotions create fear which lowers the state of consciousness
·  A lower state of consciousness attracts lower frequencies of light/information, or even the absence of light, which is darkness
·  This darkness invites anxiety and depression
·  Anxiety and depression continue the cycle of negative thinking creating fearful emotions
·  Fearful emotions make you feel frightened, unloved, unsafe and closed to any new stimuli in case it may be even darker
·  This creates the perception of being alone, uneducated, frightened and victimized.

It will be an important component of your mission to assist the ascending ones to create and follow the path of love and unity. Once they are on that path, they will easily surrender into the higher information they are receiving because they recognize the feeling of the high frequency carrier wave of unconditional love.

We will continue our lesson when we meet again. We advise that you now seek out your friends, reminisce and have fun.

PLEASE SEE COMMENTS FOR DETAILS
Posted by Suzanne Lie at 9:26 AM