Ascending Gaia from Your Galactic Family - through Sue Lie 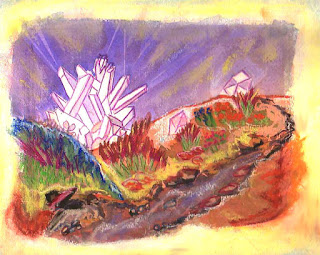 Your Galactic Family, through Sue Lie

A fifth dimensional ship is a Galactic Starship, which can be cloaked to the 3D world, or we can choose to briefly reveal itself. However, we cloak again quickly so as not to frighten humans who are not aware of us. We separate “reality,” “ship” and “planet,” because the reality is the manner in which different people perceive the same planet’s ascension process.

Our Starships are usually cloaked for the protection of those who would be so frightened to see them in their sky that they would want to “shoot down” the Ship.

On the other hand, we often show our higher fourth and fifth-dimensional frequency for the humans who are beginning to expand their perceptions into the fourth and fifth dimensions. Therefore, humans with higher states of consciousness may occasionally perceive one of our Ships.

However, we mostly stay away from any third dimensional exposure to Earth, as there are too many people in that frequency of reality who would become frightened or would try to shoot us down. As we have stated, they could not “shoot us down,” but they may frighten others, or their weapons could hit something else and harm others.

The perception of “reality” is specific to each person's state of mind and level of consciousness. Fortunately, some people have spent their lives finding ways to educate people that Gaia is a living being and that humanity has been treating it VERY poorly.

These people are often called the Illuminati, or the Dark Ones, or those who live via “power over others” with no concern for others. Sometimes there are leaders who do not care about the planet or even the people who live on it.

These Dark Ones only care about themselves, their own money, and their own power over others. Unfortunately, sometimes these “power over” people have found a way to hold a position of power.

These humans will NOT be able to even perceive the higher dimensions of reality, much less enter into that fourth/fifth dimensional vibrational world or starship. On the other hand, more and more of the “awakened ones” have expanded their consciousness into the fourth and fifth dimensions, are answering to Gaia’s SOS.

These advanced beings are so dedicated to Gaia, and Her efforts to ascend Her Planetary Self, that they will actually come to planet Earth to assist with this Planetary Ascension.

Also, any time a planet is able to ascend—raise its resonant frequency to the fifth dimension—the entire Solar System benefits from the flow of fifth dimensional light.

We Pleiadians, as well as our Arcturian and other Galactic friends, thank you for your “higher dimensional service.” Please remember that Gaia is a “planetary school” who is to teach humanity that “energy out is energy back.”

Therefore, whatever energy fields humanity sends out from their consciousness, thoughts, and actions, will fill Gaia’s Planetary Aura. You may have noticed that some times you walk through a place and feel great peace, unconditional love, and calm.

Likely Nature is at Her best and the creatures, or humans, of that area, are happy and dedicated to creating loving, reality for themselves, their families, friends and general areas.

Gaia has Her planetary consciousness to assist Her “students/humans” to release the third/fourth dimensional illusion of “time and space” Once that illusion is released, Gaia and Her inhabitants will remember how to return to their fifth dimensional Operating System of Here and NOW.

We realize that many humans only think of planet Earth as a “thing.” Therefore, they do NOT feel the harm that they are doing to their planet. In fact, many of these humans are concerned about any loss in their bank statements

However, money will NOT show them how to love ALL life and treat planet Earth as a living breathing being. Too often these lost ones, who can only find their own greed, willing and purposefully harm Gaia’s fragile planet and environment so that they can “make more money.”

However, that money will NOT stop Global Warming (unless that money is spent on saving Gaia from humanity’s great destruction.

We, your Galactic Family, want to remind you that we are HERE within your NOW to assist you with this evolutionary shift. We also want you to know that we will NOT allow you to destroy planet Earth.

If we need to land our Ships and tell you to change your ways, we will. Yes, we know that the dark ones will have their bombs ready to shoot at us. However, these dark ones will not be able to harm us because we resonate the fifth dimension.

The fifth dimension does NOT have time and space as you know it on third dimensional Earth. There is only HERE and only NOW. Therefore, one cannot plan what they will do in the future or benefit from any dark plans made in the past.

In fact, the time/based mind is overridden by the love/based heart. And, if the heart is NOT love based, it will be like a watch that you cannot wind. You can throw the watch on the floor, or stamp it with your foot, but harming the watch will NOT change time.

In the same manner, the dark ones plan to be “masters OVER” will do great harm to the planet that they live on. However, since they are filled with hate and power-over they can only harm third dimensional Earth, as they cannot perceive anything beyond their own third dimensional thoughts of “power over.”

They must buy or steal beautiful pictures with their money, but they do NOT have the heart to create these pictures inside and place them on a canvas. Inside these lost ones is only the need to have “power over others.”

These lost ones do not know that energy out will, eventually, return to the sender. Therefore they do not know that in their present, or in a future life, they can only live within the limitations of their third dimensional need to have “power over others.”

The fifth dimensional resonates to a frequency that is beyond their “power over others” mind or their heart that is devoid of all love. Power may be able to grow, but what is planted will eventually die without love.

It is true that your planet, especially the United States, has a darkness that appears to have settled in and, too often, taken power over. However. The darkest night precedes the dawn, and the dawn will ALWAYS come.

Also, the state of consciousness of the humans on the planet has a great impact on Gaia. For one thing, humans with a higher state of consciousness KNOW that Gaia is a living being and need humanity to assist Her with Her Planetary Ascension.
Each day, more and more humans are answering Gaia’s call for assistance. Also, as Gaia returns to Her innate higher fourth and fifth dimensional resonance, the dark ones will NOT be able to remain on Ascending Gaia.

However, we, the members of Gaia’s Galactic Family, will not allow Gaia to be destroyed. Yes, the third and lower fourth dimensional beings, as many of these destructive ones are not of humanity but from other dark planets, will destroy the lower shell of Gaia’s third dimensional Self.

But what the dark one does not know is that the “cracking and release” of the third/lower fourth illusion of Earth, it necessary for the higher fourth and fifth dimensional frequencies of reality to “Birth into Enlightenment.”

The dark ones will need to escape to their dark homeworlds and the Inner Light of the awakening ones of Earth will burst into their fifth dimensional Light!

“When will this occur?” we hear you ask.
It will occur within the NOW of the ONE
“How will we when it is the Now of the ONE?” you ask again.

This will occur to each of you within the NOW in which you say and live:

I NOW surrender ALL control of my physical body to my SOUL!

Within that NOW you will become ONE with your SELF
Posted by Suzanne Lie at 2:44 PM