I AM the I AM that I know that "I" Am! Through Suzanne Lie 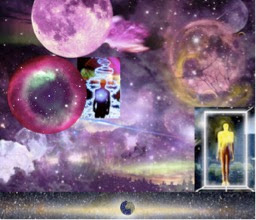 This inner commitment often takes a different “Path” for every different individual. In fact, each individual is a “puzzle piece” of the cosmic puzzle of the shifting frequencies of reality.

It is because of these “shifting frequencies of reality,” that many Galactics, have chosen to take third/fourth dimensional earth vessels within this NOW. We have been protecting, guiding, and, as much as possible within personal and planetary karmic plans, been assisting Gaia to return to her true fourth/fifth dimensional resonance of reality.

This challenge is because the transitional realities, often include components of that realities that are NOT ready to transition into the higher frequency of “Core Resonance.” These realities are often ruled by “dark ones” of the polarized third dimension who want to maintain the “power over others” that they have enjoyed in their third dimensional frequency.

When a planet, such as Gaia, is on the cusp of planetary ascension, the “power over others” will greatly resist this transition. Often they will try to, or successfully, create wars, natural disasters, and/or chronic illnesses to weaken those who have found the inner courage to remember their true Multidimensional SELF.

These awakened ones will need to find the manner in which they can assist others to also expand their consciousness to encompass the fourth and fifth dimensions.  Once their consciousness has expanded into the higher fourth and fifth dimension, they will no longer need to live by “power over others” because they will be resonating to a reality based on “POWER WITHIN.”

As more and more of humanity (as humans are the only inhabitants on Earth who are damaging Gaia), heal their need to have “power over” and return to their innate fifth dimensional consciousness of POWER WITHIN,  the ones who are still deeply attached to the old “power over others” model will lose alltheir “power over others.”

These lost ones can then choose to leave Gaia and relocate to another, less evolved planet, or to change from Power OVER to Power WITHIN. The truth is that most of these Power Over beings have long wanted to find their Power Within, but they lost their way during the many challenges of living on Earth within your NOW.

Once, dear Gaia’s Earth was as loving and beautiful as Her sister, fifth dimensional Venus. But then, the forces of darkness, who could not resonate to the beauty and Unconditional Love of the fifth dimension, took over Earth and began to lower Gaia’s frequency more and more with their innate need to have Power Over Others.

The ones who lived by Power Within were “lovers NOT warriors” and too often lost the third dimensional battles. Therefore, the awakened ones raised their frequency to stop the wars which so damaged Gaia. However, the wars continues, as well as the pollution, and damage to Gaia.

It was then that the Power Within Ones called on the Pleiadians and the Arcturians to assist them with their challenge. However, Earth chose to be a “free will planet,” which means that Gaia serves as a “school” for humans to “learn by doing.”

Hence, they needed to create wars, pollution, and destruction before they could learn that whenever they harmed their planet, they also harmed themselves. That is except for the ones who had NO sense of duty to others or to the planet that offered them a home.

These selfish beings had come to Earth because they had destroyed their own planet. Then, when they came to Earth, they set about destroying Earth as well. They did not mean to be destructive, but their innate selfishness and power over other people, plants, animals and planet, gained more and more power over. They gained this power over because they had no guilt, no love and no sense of gratitude for the beautiful planet they had found.

Hence, they set about destroying Earth, just as they had destroyed their own Homeworld.
When a planetary being, such as Gaia, is ready to “shed her 3D Matrix” and transmute into a higher frequency of reality, the darkness must be totally revealed so that it can be lovingly transmuted into the higher frequencies of light.

Those who volunteered to take an earth vessel within your current NOW, made this choice to assist Gaia with her planetary transition. However, it is vital that you, our volunteers to assist Earth, totally awaken within this NOW to the memories of your higher dimensional SELVES.

It is also important that you also keep the promises that you made before you chose your current earth vessel. Please think of your “earth vessel” as the third dimensional expression of the multidimensional body that you are currently wearing.

Your current earth vessel, which is comprised of third dimensional elementals, creates the illusion that you only have one body, which is your physical form. However, your “earth vessel” also includes the higher dimensional consciousness of the fourth, fifth, and beyond expressions of your Multidimensional SELF.

The grounding of the innate, higher and higher frequencies of your multidimensional body, that is they key to your personal and planetary ascension/transmutation, which is your return to your innate fifth dimensional frequency of SELF.

In other words, ascension is actually your “return home to your true frequency of reality.”
Therefore, we ask you all to remember that your true Multidimensional SELF is alive within the physical body/earth vessel that you have chosen to wear while you are visiting third/fourth dimensional Earth.

When you first decided to volunteer to take a lower dimensional form in order to better assist Gaia with Her Ascension Process, you were happy and ready for this service. However, the “fine print” on your “contract to return to Earth” read that once you took your earth vessel, you would soon forget your TRUE Galactic SELF.

We, your Galactic Family, planned that you would forget your Higher SELF so that you could better understand your mission to assist Gaia, and Her inhabitants, to become “swept up” into the “ascension moment.” This ascension moment is when ALL the volunteers to assist Earth returned Home to their true fifth dimensional resonance of reality. We thought that our joint ascension would be enough to also ascend Gaia.

However, the “mission to rescue Earth” was much more difficult than any of us could imagine. We had lived within our fifth dimensional forms, which resonated beyond Earth’s third dimensional challenges, for too long.

Therefore, the challenge of how to deal with the masses who were living via “power over others” was much more difficult that we had thought. We, your Galactic Family, had been away from dear Gaia too long.

Therefore, we did not realize that the base resonance of all of Gaia’s beings was the low frequency of the third dimension. The third dimensional frequency was so slow that polarities developed which were the  “good” and the “bad.”

All the wars, bombs, poisons, pollution and radiation of Chernobyl, as well as other areas that suffered “bomb testing,” great pollutions and wars, needed to be transmuted back into their higher dimensional frequencies of reality.

Many of the damaged areas of Gaia, as well as the greed and selfishness that created that damage, will need to be transmuted by the Ascending Ones who volunteered to leave their loving, safe and inspirational fifth dimensional worlds, to take a vessel to assist Gaia, are greatly honored by their Galactic Family.

From the perspective of the fifth dimensional frequency of reality, to which we/you will return, your third dimensional self is much like an automobile that your human self purchased so that we can more easily travel through the third dimensional reality.

We Galactics do not think of “realities” as places. We think of realities as frequencies.Therefore, one physical “place” on Earth could have many different realities on different frequency of Gaia’s planet.

From our perspective, we can perceive how the many versions of reality are “overlays,” with the lowest frequency realities at the bottom of the overlays and the higher frequencies of reality in the higher overlays of your reality.

When the fourth/fifth dimensions are one’s primary “frequency of habitation” they can more easily see auras, expand their instincts and creativity, as well as communicate with the higher dimensional expressions of their Multidimensional SELF.

This shift is often a great challenge for our human “grounded ones” because their “inner, higher dimensional SELF” is, consistently and persistently reminding their “physical self,” who surrounds and encompassing their consciousness, that they are Multidimensional Beings.

Too often their “Higher Self” was forgotten in the long, and often difficult, process of wearing a third dimensional earth vessel. We, your Galactic Family remind ALL of our volunteers who took an earth vessel that you are NOT alone!

We, the higher frequency expressions of your Multidimensional SELF, experience everything that you, our brave volunteers to take an earth vessel on ascending Gaia, are experiencing.

One of the primary things that we, your Galactic Family, are assisting you with is to maintain a consciousness that resonate to the mid-fourth dimension and into the fifth dimension. We know that most of you have busy lives. Therefore, these higher states of consciousness are often only available to you while your are meditating and/or visiting your Homeworld while sleeping.

Again, we wish to remind you that WE, your Galactic Family in the fifth dimension and beyond, are always with you. Since we resonate beyond the third dimensional illusion of time and space, we are able to be with you any were andany timethat you need us to.

We perceive your physical plane as the “time/space” adventure to remember your innate time/NOW and space/HERE of the fifth dimension and beyond. We are observing from the safety and unconditional love of our fifth dimensional, and beyond, reality so that we can best assist you with your brave challenge.

One of the most difficult things for humanity is to change is their beliefs. We wish to remind you that you do NOT need to change you beliefs. Instead, we suggest that your put these beliefs through the filter of your fifth dimensional consciousness.

Since your fifth dimensional consciousness is not bound by time or space, it can soar into the HERE and NOW of the many realities that resonate to the fifth dimension and beyond, in which your true Multidimensional SELF resides.

Blessings to you all.
See you on the Ship