Quick Arcturian Bulletin-- MESSAGE TO ASCENDING ONES - Through Suzanne Lie

Message to the Ascending Ones 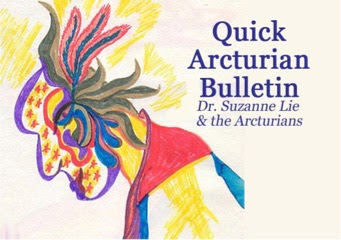 The Arcturians through Suzanne Lie
Dear Arcturians:
I spent last night collecting data about you from the Internet.  Some of it I have never heard and other information gave me a great validation that I really am in communication with you. I never knew that Edgar Cayce channeled you. How very interesting.

Is there something that you wish to share with me today?

We the Arcturians, are always here within your NOW because we resonate beyond what you would call “time.” We are always joyous to share any information with you. We realize that your mind is wondering, “How does an Arcturian feel emotions such as ‘joyous’?”

First we add, that we do not use the term of ‘an Arcturian’, as we perceive ourselves as components of a greater collective. It is via this collective perception of our selves, others, and all versions of reality that you, the members of humanity, will blend into the fifth dimensional Now.

YOU are also members of our expanded Galactic Family of the Pleiadians, Sirians, and Antarians, who are our closest family, both in proximity as well as in our joint service to Gaia. We Arcturians, as well as your expanded Galactic Family, serve together with our brave family members who have taken third-fourth dimensional earth vessels on the ascending body of Gaia.

All of us Galactics have been guiding, assisting and protecting our beloved friend, Gaia, planet Earth. It is for this reason that many of our Galactic Family have volunteered to take an earth vessel in order to best assist Gaia.

While wearing an earth vessel, our volunteers to Earth can become directly involved with the immense clean up job that must be completed before Gaia can be free to release the shackles of third dimensional, time and space and begin the return to Her true multidimensional, planetary self.

As you are all well aware, you, the members of humanity are slowly expanding your consciousness enough to remember that you are in the beginning of the process of going into every third-dimensional incarnation you have ever had on Earth in order to transmute all the effluvia you have ever left on Gaia and during any of HER incarnations.

Please note that we said ‘Her’, meaning Gaia’s incarnations, rather than humanity's incarnations. Suzille was also surprised by the ‘mistake’ she made in transcribing our message. However, as is often true, a mistake is a third-dimensional term and not possible in the fourth, fifth, and beyond dimensions.

Therefore, please remind yourselves that many third-dimensional mistakes are actually a misperception or confusion of a higher dimensional message. You see, third and fourth-dimensional humans do make mistakes. However, a fifth dimensional and beyond being is aware that a “mistake” in the third-dimension is often an opportunity to see and understand the components of your third dimensional life that are up for transmutation.

What we mean by “up for transmutation,” means that you, the members of humanity on beloved Gaia, are ready to expand the frequency rate of any component of your present, third and fourth-dimensional reality. The problem is that humans tend to ignore their mistakes.  If they attend to their mistakes, they are concerned that they will likely judge themselves or worse yet, become the victim to someone else that “made them do it.”

If any of our ascending ones blame another person for any external event or situation which is actually their own mistake, their consciousness will plummet into the lower octaves of their third and/or fourth-dimensional selves.

If you, our brave volunteers choose to take an Earth vessel, put power into an external person, place or thing you will have created a huge gap between your third, fourth-dimensional Earth vessel and your fifth dimensional and beyond Multidimensional SELF.

We understand that what we have just shared might seem impossible to many humans, however we remind you that we only communicate with the versions, frequencies, of you that have awakened and are ready to serve Gaia. Would a college look at first graders as a possible student for their Master’s Program?

We are addressing this message to those of you who have dedicated yourselves to the path of assisting Gaia with Her Planetary Ascension into the fifth-dimension and beyond. We Arcturians have other messages that we will address to the newly awakened ones.

Please do not think that we have judged those that are not ready for this information. The purpose of this message is to assist the ascending ones to assist others as a process of their personal ascension. Beloved ones, it is the Now in which the cosmic energies are building and growing into higher and higher frequencies.

Expanding the frequency of your perceptions is much like building a stronger earth vessel. When you want to build a stronger body, you will begin by lifting weights of a lower weight. Then, eventually, you will be able to lift heavier and heavier weights.

In the same manner, you may begin your inter-dimensional communications with message about one of your past lives. Then, as you expand your consciousness you may be able to follow the evolution of incarnations into fourth dimensional past life situations.

Over time, and with practice, you will be able to follow the evolution of that incarnation into the fifth-dimension, or back into third-dimension, in ore to experience another third-dimensional Earth lifetime.

For those of you who have been awakened in this manner during many of your incarnations, it is known that you are a Multidimensional Being. However, there are still millions of our representatives to Gaia who are only aware of their present incarnation.

Dear Awakened Leaders, some people will be very frightened by our landings and will fear that we have come to “take them over.” However, on the contrary, we are landing to assist them to “take over the responsibility of their own planet’s evolution.”

More and more of you have remembered that “YOU are US”. As humanity remembers that they are multidimensional, they will also remember that they are also components of what they would call “Us.” What we call us is, “We are all of the fifth-dimensional and beyond beings who have dedicated ourselves to assisting with Gaia’s ascension into the fifth dimension.”

Those of you, who have remembered that you and us are ONE, also remember that you have chosen to take a third dimensional vessel to best assist Gaia with Her Planetary Ascension. It is those of you who “remember your true SELF” that will be of greatest assistance during the time of our landings.

We will aid you to prepare, educate, and assist the other humans who have not yet remembered their own Multidimensional SELF. We will also need our fully awakened volunteers to Earth to calm un-awakened humanity’s fear with unconditionally loving expectations and kind support.

For you, the ones to whom we are speaking, our landing will be a wonderful and long awaited event. On the other hand, there will be many others who are still frightened by the possibility of a higher form of life entering their daily reality.

Those who have had loving and generous families and mentors will be more able to accept the feeling of a loving family member. However, those who have had violent and/or abusive family members will look at all beings as appearing to be, or wanting to be, better than them. Unfortunately, this population may perceive our arrival as a dangerous and threatening event.

It is for this reason that we have directed Suzille to write her, “Pleiadian Perspective of Reality” books, as well as “The Journal,” which follow the process of a “normal family” awakening to an inter-dimensional reality.

We have recently directed our scribe to write her latest book, Preparing for First Contact, to assist humanity to understand our upcoming visit to Gaia’s Earth. Suzille has also scribed two picture books.  One of which is soon to be published.

These picture books were channeled through her from us as a means to prepare humanity for communicating via Light Language. We will be speaking a great deal about Light Language and Light Body in our upcoming on-line communications with our Ascending Ones.

We believe that we have given you more than enough information for this Now. However, please know and remember that what we have spoken of in this transmission is like “a drop of water in the Atlantic Ocean” compared with all the wondrous things we will be sharing with all of you.

Soon, you will no longer need to “learn.” Instead, all you will need to do is to remember. We, your Galactic Family, are so very pleased with your many contributions to the continued evolution and awakening of Gaia and all her inhabitants.

We are your Arcturian family. Thanksgiving and Blessings to you all for you. You have contributed more to Planetary Ascension then you may ever believe.

We will return. In fact we will never leave.
The Arcturians and your Galactic Family

FREE recording of this message HERE or View the Video Below: