Becoming ONE~ People and Planet---Gaia and YOU 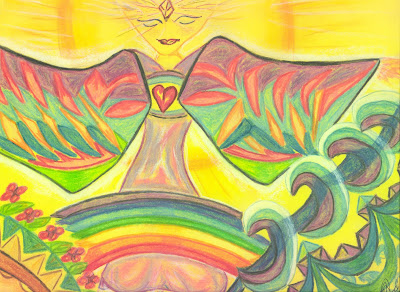 As we continue our adventure of exploring our inherent connection to the planet, we review the full chakra system as it resides in the human body and the planetary body, for we are all connected in Oneness.

Each chakra serves as a portal of experience and communication with different dimensions to align with our Multidimensional SELF. The chakras each portray a specific color in the spectrum and are aligned from the bottom starting at the first chakra and moving up to the seventh chakra at the top. 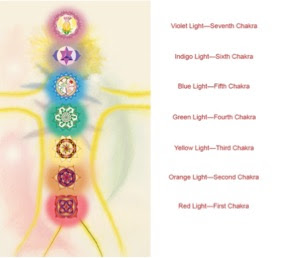 Our fourth or heart chakra serves as the meeting ground of these two polarities of infinite and finite.

Chakras, which rule certain areas of our body, can also be divided into three levels of consciousness. Chakras of our unconsciousness rule the lower body and area of our life to which we are normally unconscious, such as grounding with the planet, digestion, and elimination.

Chakras of our consciousness rule the middle part of our body and areas of our life of which we are generally conscious, such as relationships, health, and communication.
• The fourth chakra rules the heart, lungs, immune system, arms, and hands.
• The fifth chakra rules the throat, mouth, speech, and hearing. 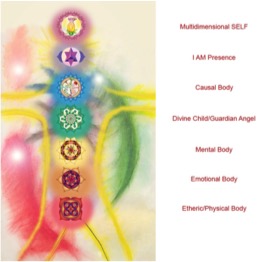 The chakras represent not only a particular part of our body, but also a part of our consciousness.  Consciousness is the experience of “be-ing,” which represents everything that is possible for us to experience. These senses, perceptions, and possible states of awareness can be divided into seven categories that are associated with each of the seven chakras.

• A first-chakra problem would express through our:
-       consciousness as difficulties with our daily survival, vital energy, or dedication to physical life
-       body as problems with our skeleton, legs, knees, or feet

• A second-chakra problem would express through our:
-       consciousness as difficulties with our emotions, ability to give or receive nurturing, or our home
-       body as problems with our reproductive organs, intestines, or lower back

• A third-chakra problem would express through our:
-       consciousness as difficulties with thinking and power struggles with others or within our self
-       body as problems with our liver, gall bladder, stomach, spleen, or pancreas

• A fourth-chakra problem would express through our:
-       consciousness as difficulties giving or expressing love in our relationships and our over-all health
-       body as problems with our heart, lungs, immune system, arms, or hands

• A fifth-chakra problem would express through our:
-       consciousness as difficulties with communication and creativity
-       body as problems with our throat, mouth, speech, or hearing

• A sixth-chakra problem would express through our:
-       consciousness as difficulties with inspiration, imagination, and spiritual power
-       body as nightmares or problems with our vision, face, head, or sleep

• A seventh-chakra problem would express through our:
-       consciousness as difficulties with mind expansion
-       body as problems with our brain or nervous system 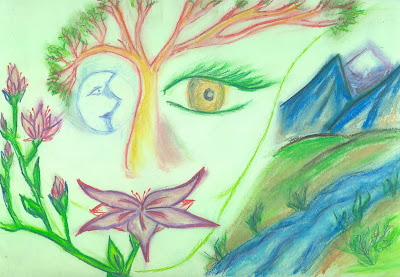 I am very pleased that you are joining us to connect your personal chakras (which are portals) with my planetary chakras/portals. As we join together Person and Planet, we will do so chakra-by-chakra and dimension-by-dimension.

I am honored to be here with you on your journey. I am joyous that you have answered my call to assist me with my transmutation into fifth dimension. After you have visited your personal chakras, I will happily take you on a voyage into my Planetary Chakras.
Just imagine, people and planets. 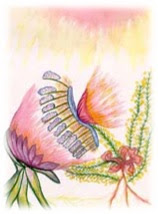 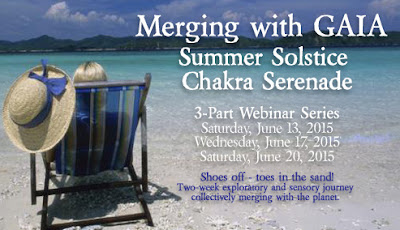 Grab your multidimensional passport and join us for a playful trip (starting NOW) as we explore and merge our personal and planetary chakra systems! Let’s celebrate the summer solstice with a two-week exploratory and sensory journey collectively merging with the planet and ultimately flowing along the River of Unity.


Our experience culminates around the summer solstice as we collectively flow in the River of Unity around the world to merge with the seven planetary chakras.
Webinar 1 (Chakra Intro & Chakras Part I)
Saturday, June 13, 2015, at 11 AM Pacific (Local Time)
Webinar 2 (Chakras Part II)
Wednesday, June 17, 2015, at 3 PM Pacific (Local Time)
Webinar 3 (*Summer Solstice Serenade Finale)

All three webinars are included in the full series, and *additional participants are welcome to join the final solstice celebration webinar on its own.  If you are unable to attend live, you are still welcome to register, and the recordings will be shared with registrants.
(Current Multidimensional Leadership Academy Students attend for free!)