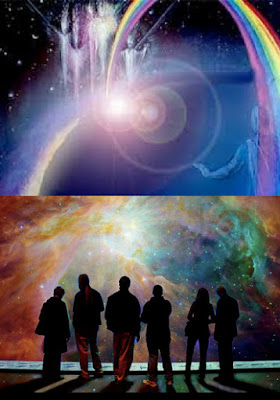 It takes great courage to look at our own fears, past trauma, failures and lost dreams. However, if we can find the courage to look into the lowest frequency of our consciousness and of our aura, we will find many teachers.

We will also realize how very much we have grown and changed from our “past” expressions of our SELF.

There is still “time” on the Astral Plane, but it is much faster. I just a teenager when I discovered that time was different in different places. I did not have a word for “states of consciousness” then.

I know it was that age when I made that discovery because I remember that bedroom like it was yesterday. I was just entering puberty, and my body changes where creating huge and unwanted emotional shifts.

Now I know it was my Higher Self that was guiding me, but then I only knew that if I did not gain some control over my dreams I would go crazy.

Therefore, I started learning to put up a black velvet screen in my mind and use my will power to see an image.

The first image I used was a red Rose. It was very difficult to create a picture of a rose in my imagination, but I continued my practice until I could.

Eventually, I could even spell words, which was very difficult to not see the words in mirror vision. Finally, I had gained some control of the images that allowed to enter into my mind before I fell asleep.

Somehow, I had figured out that if I allowed negative thoughts before I went to sleep that I would have bad dreams. I figured this out because I had gone to a horror picture where “The Blob” came from outer space (teaching the young people to hate and fear “aliens”) and melted people.

I was so terrified by those images of being melted, that I saw them whenever I closed my eyes to fall asleep. After much practice, which was done on my own, as there was not one person in my life that I could share my problem with, I was able to create pleasant images in my mind.

When I took the time to create this loving, happy images I was free of nightmares. However, if I forgot, then the nightmares returned.

Gradually, sleep was not as terrifying, and I could just relax into it. I also decided to make my alarm clock have music rather that the shocking, buzzing noise. Then, one morning I had a dream that was very long and involved.

The main thing I could remember about the dream was the song that was playing through out the entire dream. It was a nice dream, a pleasant dream, and I woke up slowly.

Then, to my surprise, the song that was playing through the very long dream continued for quite a while after I had awakened.

That was when I discovered that time was different when we were asleep from how it was when we were awake. I noted that discovery then forgot about it. It was one of my first adventures into states of consciousness.

Since I was a young adult in the 70’s I learned about the new term called “ altered consciousness.” Before then, consciousness meant that we were awake as opposed to asleep.

As I look back now I can see that my state of consciousness was very low for many years, as I was very depressed.

I was depressed because I missed my SELF, and was upset that I could not BE myself with any one or I would be judged. Therefore, I have chosen to retrieve my depressed ones.

I say “ones” as depression followed my through many stages of my life. I see all my depressed ones now happily studying in the beautiful Mystery School.

I have done a version of this exercise many times, but it never gets old, and each time I feel even better.

I hope that you can retrieve your lost portions of your SELF and take them to this beautiful Mystery School.

They will learn a lot, and so will you.