THE POWER OF PERCEPTION TO
Birth New Earth 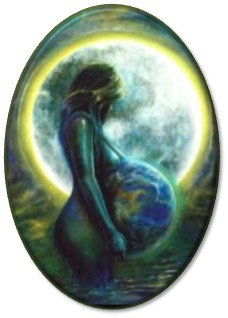 We, the Arcturians are perceiving that more and more member of humanity are beginning to realize that have a sense of “power within” if VERY different than having “power over.” “Power Over” is something that  the awakening, and awake, humans are understanding more and more.

Then, there is the “power of perception,” which means that you are able to trust that which you perceive. That sentence may seem unusual for those who have a sense of inner power over the life that they are living. However, there are still many humans who have not yet found that inner power within themselves.

These ones have likely had a more difficult childhood and life, which has diminished their inner power. On the other hand, those who have had support and love in their life, are able to support and love themselves.

Yes, inner support of self, and love of self, is often difficult to maintain in a reality that is changing every day. We the Arcturians, see how Gaia is suffering from the selfish actions of the “lost humans.”  We Arcturians call them the “lost humans” because they have LOST THE MEMORY of their true Multidimensional SELF.

Yes, every human initiated their “experience of humanity” while they were still resonating to the fifth and beyond dimensions of reality. Within the fifth dimension and beyond, Unconditional Love is common.

If there is any friends, family, or even ones that you do not know, you have difficulty maintaining their fifth dimensional states of consciousness, you will ALL instantly give them Unconditional Love to assist them to return to their innate state of consciousness.

If one is having trouble remembering the feeling of Unconditional Love – which you all had while in your fifth dimension and beyond expression of SELF—we remind you that YOU are a Multidimensional Being.

Therefore, your consciousness is much like a stairway, and if you have fallen down the “stairs” to a lower level of consciousness, you will be instantly sent the Unconditional Love that is “normal” in the fifth dimension and beyond.

We, your family who are currently residing in the higher dimensions of reality, are always open to communicate with our friends and family who chose to take an incarnation on Earth to assist poor Gaia during Her time of great need.

Initially, many of us chose to take an earth vessel so that we could better understand Gaia’s plight. Within our fifth dimensional resonance, there are no wars, no fighting, no fear, and no need to have “power over others.” We do not need that power, as we resonate to a frequency that does not have “separation” in the manner that occurs on Gaia’s third dimensional form.

We wish to remind you all that Gaia is a living being who is so powerful and filled with unconditional love that only an entire planet was big enough to hold Her mighty frequencies of light.

Unfortunately, but not surprisingly, Gaia’s great light has caught the attention of the dark ones who still reside on Gaia’s planetary body. However, more and more of Gaia’s earthly humans are beginning to remember that there is a component of their inner self that seems to be calling then to remember.

Many of the humans are unable to feel Gaia’s call but, we the Arcturians, are happy to say that it appears that the “Dawn” in coming through the “Darkest Night” that has damaged Gaia’s planetary body in many ways.

We are happy to say that more of the human residents of Gaia are awakening to the need to Unconditionally  Love and Protection their planetary home of Earth. This Love and Protections comes primarily through the awakened humans, and the “leaders” may or may not be able feel Gaia’s call for assistance.

Therefore, we, the members of your Galactic Family, led by the Arcturians and Pleiadians, are answering Gaia’s SOS that She has sent out into Her planetary  inhabitants as well.

Humanity, is beginning, more and more, to realize that the trees, flowers, bodies of water, and even the air are filled with Gaia’s essence.  Therefore, more and more humans on Gaia are realizing that all life is alive. As they expand their consciousness to accept that all the earth, air, fire, water and all living beings on Gaia ARE actually the member of Gaia.

We, your Galactic Family, are very happy to know that it is becoming the NOW for more and more of human’s on Gaia’s Earth to begin to remember the Power of their Perceptions.  They, one by one, or in groups, are realizing that you are in the ongoing process of awakening to your own higher dimensional/fifth dimensional perspective of  your Earth Reality.

As long as humans limit their perspective of reality to that which only resonates to the third, and perhaps, their fourth dimensional perceptions, they will limited to the illusion of Gaia’s Earth being “ONLY  third dimensional!”

In fact, Gaia, who is the hearth and soul of Earth, is a multidimensional being who chose to become a third dimensional planet to assist that planet, now known as Earth, to ascend into the higher dimensions.

Gaia hopes to be able to  assist Her humans to be aware of the “Power of their Perspective.” She, Gaia, is aware that She is a living being, and is ready to share that truth with Her human population that have chosen to take an incarnation during this
NOW.

Gaia is aware that many of these human’s have left their beloved homes in the fifth dimensional realities in order to assist Gaia’s Earth to overcome the “darkest night” that has created so much damage to Her planetary SELF.

We, the Arcturians, hear that Gaia herself wishes to speak. We all are privileged to hear what Gaia has to share:

Beloved beings of my planet Earth, I Gaia, thank those many, many of you humans who have remembered your own Higher Dimensional SELF (either consciously or unconsciously) so that you can understand that YOU are My Planetary Protectors. I Gaia, am, indeed, a living being, just as the humans are living beings.

I Gaia, am so very pleased that more and more of my human population are beginning to remember that they took this incarnation on my planetary body so that they could assist the humans to expand their  POWER OF PERCEPTION to include the frequencies of the higher fourth and fifth dimensional frequencies of my Planetary form.

I, Gaia, your Mother Earth, am here within your NOW to remind you that YOU are all Multidimensional Beings who can resonate to higher and higher frequencies of perception.

And, as YOU the higher dimensional member of humanity, will remember WHY you took this incarnation on my body and HOW you have chosen to assist me with my Planetary Ascension. There is much more to say about this process, but I, Gaia, will allow you to absorb what you have received enough so that your POWER OF PERCEPTION will eventually expand to encompass the fifth dimension and beyond.

When we see that the majority of humanity has expanded their consciousness enough to be able to accept the vision of our Star Ships, as well as your own fifth dimensional expressions of SELF, we WILL begin our Landing Earth.

Blessings to you all
Your Mother Gaia 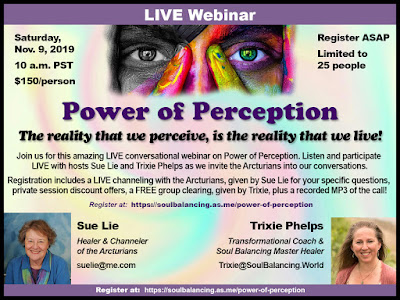 Greetings from Sue Lie, Trixie Phelps, and The Arcturians,

Please see the above add for our next Webinar. If you have any questions, please contact me at

What does Power of Perception mean?