Being ONE with Gaia 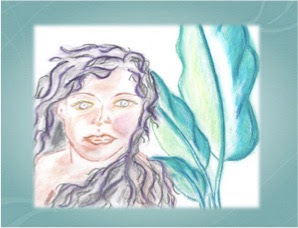 The Arcturians and Our Galactic Family
Dear Readers,

I wish to share with you that I have been moving through a deep process of transmuting my SELF into an entirely different reality. With great thanksgivings I add that the reality to which I am “moving” is the life that my true SELF has always wanted, but kept that desire as an “impossible reality” that I could only imagine and dream about.

Of course, in order for the “new” to enter, I had to first release the “old.” I will take a moment to explain that the manifestation of this shift is that I am now in the process of moving into what I would call a, “fifth dimensional community.”

Of course, it has Internet, so I can continue meeting and communicating with all of you in the same manner as always. I wanted to write this article to remind you all that our “long term dreams” CAN come true.”

In my case, this move is the fulfillment of a very long-term dream about living as ONE with Nature. I imagined that life as a child and teen, and I went to a college that was in the redwoods when I graduated from High School.

However, I was not ready for that change then and only lasted one semester in that environment. I was too young to change, and I had many processes to experience before I could return to that dream and totally live it.

We are now fulfilling that dream. This time, we bought a house and are moving soon to that location. Of course, we went into Nature for most of our vacations, so we could always “visit” our dream, but now we, my husband and I, will LIVE that dream.

Dear Arcturians and members of my Galactic Family,
Please assist me to understand why I have been directed to share my personal experience in this manner.

Dear Suzille,
We have asked you to share your experience of “moving into your True SELF,” as we would call it, because it is the NOW for ALL of our multidimensional representatives to Earth to remember, and become, their true SELF.

We also add, that every single human on Earth, even the Illuminati, has the possible reality to initiate their Return to SELF. What we mean by “Return to SELF,” is that Gaia will be increasingly able to open more and more of Her fifth dimensional territories for habitation of Her earthly inhabitants.

Of course, there are two components to this shift. ONE is making that shift/expansion into your fifth dimensional consciousness, and TWO is remaining within that state of consciousness in order to calibrate your perceptions to that frequency of reality.

The only reality that your earth vessel can perceive is the reality that matches your state of consciousness. As you know, there are uncountable versions/frequencies of reality that are always running, all the time.

The third through mid-fourth dimensional Matrix that has housed many of Her inhabitants will be released. Then, those who can resonate their consciousness to Gaia’s higher fourth and fifth dimensional resonance will join Gaia with Her Earthly Ascension.

Furthermore, as Gaia embraces more and more of the Higher Light through which She is traveling, Her Planetary Consciousness will expand into higher and higher frequencies of the fourth dimension, as well as into the fifth dimension.

Eventually, Gaia’s Third Dimensional Matrix, on which the polarities of good and bad battle for position, will no longer be able to resonate to Gaia’s higher frequencies. Within that NOW, the Matrix will fracture and it will need to leave Earth in search of a lower frequency planet around which it can adhere.

Those who still live on the 3D Matrix, will not be aware of what is occurring as the 3D Matrix will not change. Hence, those who can only adhere their consciousness to the Matrix will NOT see a difference in their reality.

Eventually, the 3D Matrix will adhere to another planet on which it can afford its residents the opportunity to continue their “power over others” versus “powerless victims” format.

Those who have resonated to the frequency of the 3D Matrix for many incarnations have been in search of Power Over because they could not relate to the immense Power Within that they carried within their High Heart and Multidimensional Mind.

However, the Multiverse is forgiving. Therefore, it will grant these lost ones yet another opportunity to release their need to have “power OVER” others and seek their own power within so that they can “return to their Soul’s innate Infinite Wisdom, Power, and Love.

Those who have chosen the third dimensional path will continue their lives in much the same manner as they always have. Interestingly, because they are seeking “power over others,” they will likely NOT perceive that their reality has shifted.

Therefore, they do not know Gaia’s third dimensional operating system, which are based on time, space, separation, and energy out equals energy back. Therefore, they have not yet realized that when negative energy comes to them, that they are the hidden source of that energy field.

If what they feel is anger or sorrow, it is because (usually in an unconscious manner) they have sent out that energy field. Once they realize that they are actually in an on-going process of creating that which they perceive as coming to them, they have an opportunity to learn.

ALL of the Ascended Masters on Earth have mastered that lesson. Even in the midst of great suffering, they continued to ONLY send out love, especially Unconditional Love. Therefore, they crossed over into the Astral Plane at their death with a consciousness filled with Unconditional Love and Unconditional Forgiveness.

It was this state of consciousness that allowed them to “ascend” into their fifth dimensional Lightbody and eventually became Ascended Masters and/or religious icons. However, the Ascended Masters had no desire to become “icons,” and tried to tell their disciples NOT to worship them.

However, for much of Earth’s history, few humans could realize that their spiritual leader did not desire their worship, and actually wanted their disciples to live in the same manner as that ascended one had lived.

The ascended ones did not perceive themselves as Gods in the manner in which their disciples perceived them. Instead, they wanted their disciples to go through the same process that they had taught them via their process of resonating to their own ascension.

Of course, few humans have been able to live a life based on Unconditional Love and Unconditional Forgiveness for ALL lives—even the person who was responsible for their death.

However, within your NOW, your own Multidimensional SELF is able to communicate with you in a manner that was not possible before. Those humans who have been able to “love selves as much as they love others” have created a Circular Path between the third, fourth and fifth dimension of reality.

This Circular Path allows the ascending ones to realize that they are “not saints.” Instead, they are Multidimensional Beings who have chosen to take a third dimensional earth vessel in order to best assist dear planet Gaia with Her process of Planetary Ascension.

There are many ones who could have become Ascended Masters within their earthly incarnation, but the “power over others” that could be gained, as well as the “wealth and recognition” that their ego-self craved, lowered their consciousness and hardened their hearts.

Therefore, they chose the glory of the third dimension over the unconditional love and power within of the fifth dimension and beyond. In fact, most of the Ascended Masters had several, or many, “rehearsal lives” in which they became fully aware of the great challenge presented by taking a third dimensional body.

We, the Galactics, and even the Angelics and Ascended Ones have all moved through the initiations of “power over others” versus “power within.” Third dimensional Earth resonates to such a low frequency within your NOW, and has suffered two world wars, atom bombs and the radiation from the Chernobyl “accident.”

Beloved Gaia has suffered greatly in Her third dimensional form and anxiously awaits Her full return to Her innate fifth dimensional form. However, because Gaia—who is the Living Being often known as Earth—is deeply dedicated to ascending as many of Her inhabitants as possible.

She is currently faced with a huge challenge. She deeply wishes to ascend all Her humans. However, many humans are responsible for the murder of many of Gaia’s species of birds, animals, fish, core, oceans, water, air etc. etc. She is faced with a great decision.

Does she ascend NOW in order to rescue all of Her life forms above, or should she wait longer so that more humans will be able to ascend as well? After much pondering of this question, Gaia has decided to contact the Galactic worlds that surround Her.

Venus instantly rushed to Gaia’s rescue, as did many of the Galactics who are now surrounding Gaia. From their Starships, they are constantly assisting Gaia, but humanity sends our more destruction as soon as an area is cleared.

Therefore, we end this transmission with a loving plea to ALL humans on Earth. We, your higher dimensional expressions of SELF—The Galactics—call on you to remember NOW, the reason why YOU chose to take a third dimensional earth vessel within this NOW.
YOU are important and WE need your assistance NOW!! 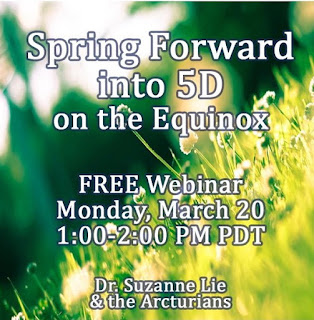 This Equinox on Monday, March 20
JOIN US AS WE
Spring Forward into 5D

We happily invite you to our
FREE WEBINAR