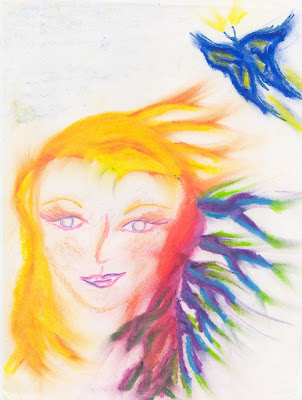 By Sha-ier through Sue Lie

Greetings, I am Sha-ier,
I am a representative of the Ashtar Command. I am now in training to join the Golden Ones. There were many initiations that I had to complete before I could purify my human component of SELF in order to fully merge with my Multidimensional SELF, and begin my transmutation back into being a Golden One.

In order to begin my re-unification with my Golden One SELF, I was instructed to share the stream of my consciousness from my third dimensional, Physical Self, through my fourth dimensional Astral Self, and into my fifth dimensional Lightbody SELF.

My fifth-dimensional Lightbody SELF is serving on one of the many Starships that surround Gaia. Therefore, through the communications within the NOW of my Lightbody SELF, I am honored to assist humanity with the preparation for planetary ascension.

Within this NOW, I am being guided to share my experiences with others, as humans often learn best from those who set an example for them. Hence, I will begin with my first recognition that I was VERY different than other humans.

My first taste of how I was different started back in Kindergarten. My parents were members of the Ashtar Command who had decided to wear a human form in order to better understand those who were wearing a physical body on physical Earth.

Since they were always very open with me about our heritage, they often discussed their life on the Starships. While I was very young, they remained earthbound, as they wanted me to fully bond with the humans around me, but they wanted me to know my true SELF.

Therefore, they told me that they had come from another planet in the Pleiadian Star System. I think they told me that because they greatly missed their life there, but I was too young to really grasp how different I was from the other kids. That is until I drew the picture of a Starship and told every one that that was where I came from.

The result was that I got in so much trouble for lying, or maybe having a psychological disorder, that my parents had to quickly move far away and change their names. After that, I never told anyone my “secret” for fear it would frighten me.

However, even when I was very young, I did not feel like I “fit in.” Then, after the secret was out and I had to leave all my friends, I kept my life to my self. As I grew to be older, about 10 years old, one of my parents was usually on the Ship, and the other stayed on Earth with me.

Having only one parent at a time was a very difficult time for me, as I greatly missed my entire family. Also, I did not like school anymore because I was getting tired of not being my self. I did not really fit in at school, nor could I tell any of my friends who I really was.

Also, I was not really sure who I was. When I asked my parents for more information, they always said that when I was a bit older they would take me to the Ship. Finally, when I was 13 years old, and began my process of becoming an adult, my parents told me it was the NOW for me to visit the Ship.

However, they warned me again and again that it was NOT a good idea to share my experiences with others. Unfortunately, I was a young and enthusiastic preteen and went against their advice.

As long as I was a small child, my stories fell under the category of, “Isn’t she cute?” or “what is she talking about?” However, when I became almost a teenager, I realized that my stories made others so uncomfortable that some of them did not want to be around me.

Bit by bit, I became the “crazy kid” with “weird stories.” That is when we all moved again. The very best part of the move is that we took a “vacation” on the very same Ship that I had been dreaming about for as long as I could remember.

During that visit to our Starship, I finally felt “normal,” as all the other teens were just like me. However, most of them had never been on Earth and were very curious to hear my stories. I tried to tell them the good parts of being on Earth, with just a bit about how frightening it was there sometimes.

The truth is, my life on Earth just seemed “normal.” Of course, people got shot, raped, bankrupt, and suffered from long illnesses before they died. That was just “normal life on Earth.” However, when I shared these stories with my new friends who had always lived on the Starship, they were shocked.

“How does it feel to be afraid?” they asked me.
“What is it like to live in a reality based on time and separation?” was another question.
“What was it like to come here when you had grown up down there?” they also asked.

At first I was quite popular as everyone was interested in what I had to say. But, after a while I started seeing how they were different from me. My parents told me that they were more “evolved” than me, but I would catch up quickly.

It took me a while to actually realize that I was wearing my Lightbody because everyone around me was also wearing a Lightbody. My friends, with whom I had played with, in my imagination since I was a young child, instantly greeted me. They, too, were wearing their Lightbody.

For a flash of a moment, I WAS the Ship, and the Ship was I. Within that moment of the NOW, I experienced a Life Review of every life I ever had on planet Earth. I almost fainted from the rush of information that filled my Soul, but my “new/old” friends surrounded me and sent me Unconditional Love.

When I recovered, which was quickly because of my friend’s assistance, I asked, “What was that?”

My friends all smiled and said, “You just recalibrated your self because this time you are staying on the Ship to assist with the Landings.”

“Stay on the Ship?” I asked. “But what about my family? They will miss me and wonder where I am. I don’t want to frighten them.”

“Don’t worry,” my friends replied as ONE telepathic message, “Your family is still needed on Earth, but they will visit you here as often as they can.

“Wait a minute,” I said. “I guess I was gone too long. I can vaguely remember my human child-self playing with my Sparkly Light Friend, as I called it. Actually, as I call you! But when I became a teen, I thought that was silly stuff and acted like my friends.

“Yes,” they all replied in one voice. “That is why we brought you here. You are to be one of the humans “who remember” that you are multidimensional while you are still wearing an earth vessel.

“We brought you up here as a teenager, as your generation will be adults when the landings begin. That is, we hope we can land within that NOW. We know that we cannot wait much longer for our landings because humans are on the verge of destroying their planet.”

“No, your generation will stop the others from destroying the planet.”

“But how will we do that? We are just kids.”

“You are not “just kids” any more. You are the generation who are awakening to a New Form of reality. You are all on the edge of adulthood and are much more awake than your parents were. Also, you are the same generation as the awakening children of the Illuminati.

“Therefore, the polarities of what had once been called “power within” and “power over” will merge, as the new generation of the Illuminati children hold too much Light to be fooled by their parents and family.

“Oh yes, that is why they can hold the light even though their parents are trying to indoctrinate them into the darkness of “power over others.” Your generation has matured from childhood and into adolescence with a steady stream of higher light moving into and through your earth vessels.”

“We did?” I asked. It was then that an amazing thing happened. Instead of answering me with their voice, my new friends gathered around me and sent me what I later learned was a “Light Message.”

I did not hear a word, but I did experience the most wonderful experience of unconditional love and total acceptance. At first, I was so overwhelmed by my feelings that I could not concentrate on my friends. However, they all touched me and patiently waited for me to accept this new means of communication.

When I could finally speak, I said, “Wow, what was that?”

With one voice they all said, “That was Light Language.”

“Well,” I responded. “If that is Light Language, then that is the only way I ever want to communicate from here on!”

“Yes,” they responded via Light Language, “It is the only way you will communicate here. But, when you visit Earth, you will be one of the many teachers of Light Language.”

“Hey, wait a minute,” I said in an embarrassingly rude fashion. “I don’t want to go back there!”

Instantly, I realized that I was acting like a bratty Earth teenager and started to apologize.

“NO,” they said in one voice, “You do not need to apologize. It is because you can still remember the difference between your 3D reality and the 5D reality here on the Ship, that you have been asked to take this assignment.”

Then, Lisara, who would soon become my personal guide and best friend, put her arm around me and said, “Don’t worry dear friend, there is no “time” as you know it here. Therefore, there is no hurry to remember your SELF.”

The terms “no time” and “remember my SELF” were swimming in my head, but all I could focus on was Lisara’s warm arm around me, as well as a distant memory that my earth self had long suppressed.

Confused and gazed, I vaguely heard Lisara tell me, “Come, we will show you around the Ship now.”


I felt so comforted by her soft voice and the camaraderie of whom I somehow knew would be my best friend, that I allowed her to lead the way into my new, and most amazingly wonderful life.
Posted by Suzanne Lie at 12:44 PM