THE PLANETS SPEAK OF TRANSMUTATION

You may have heard of the Cardinal Grand Cross that will be exact in Earth’s sky on April 23 and 24th, 2014. There has been much written about this astrological event, so we the planets wish to share with you how each of us will affect you on Earth 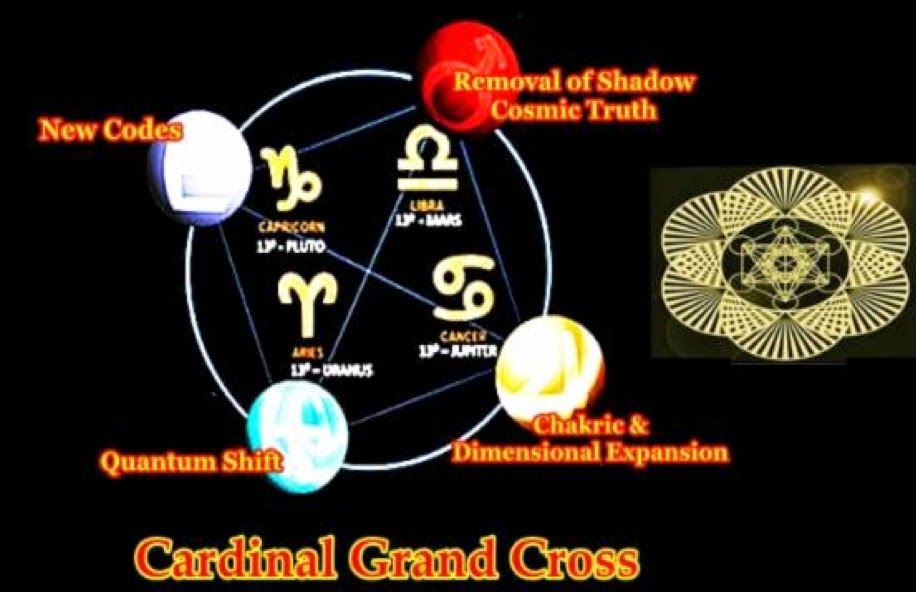 This rare Cardinal Grand Cross will be exact April 23-4,
with all four listed planets at thirteen degrees . 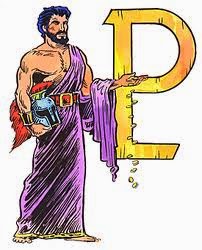 “Pluto (transmutation) and Capricorn (world governments) in Earth signs herald major transmutations in world governments. Both I, Pluto, and the sign of Capricorn work quietly and behind the scene. We invisibly go about our work in a manner that no one notices until all the work is done and someone says, ‘Wow, who did that?’

“While you are busy with your mundane life, I have been gradually transmuting all the foundations of your life that you have buried in your unconscious mind. In fact, now I have been working on the foundational level of that which your personal and political history has created as a resistance to change.

“Resistance to change only makes the inevitable more difficult to accept. Therefore, I ask you all to embrace my powers of transmutation. The difference between transformation and transmutation is that transformation adds a new element to create change. On the other hand, transmutation does not add anything new, but raises the frequency of that which already IS.

“As you may know, personal and world political foundations are filled with MANY secrets that have NEVER come into the light of day. In other words, your personal and planetary political life has been based on ‘mushroom management.’ Most policies have been to ‘do it behind closed doors where only the darkness prevails.’

“Dear humans, how many of the decisions you have made have come from old patterns of behavior that are archived behind the ‘closed doors’ of your own unconscious childhood issues?

“Dear world leaders I, Pluto, am speaking to you from the sign of Capricorn that rules government. Therefore, I ask you how many of your governmental decisions are based on patterns that were established when your government was established?

“Did you forget the foundations of your government and move into selfish motives? You must know that I, Pluto, do not care about your selfish human motives. I am here to transmute that which has fallen off its foundation so that it can relocate itself in the many higher frequencies of reality.

“With my powers of transmutation I will correct where you have gone astray from your true foundational formats and project that image, free of lies and illusions, into the higher frequencies of your personal and governmental life. I am sorry if that is uncomfortable to you, but I am now living and channeling through Capricorn.

“While I flow through Capricorn’s energy field, it is my duty to transmute that which has morphed away from its initial intention by sending back what has been sent out. You do remember that Saturn your old karmic friend of ‘energy out is energy back’ rules Capricorn

“If you, the people and governments of Earth, are to move into a higher frequency of reality, which is the Divine Plan, you will need to experience your own energy field as it comes back to visit you. Only then can you choose to assist me, Pluto, in transmuting your ‘misdirected energy fields’ back into the planetary and personal Divine Planes. 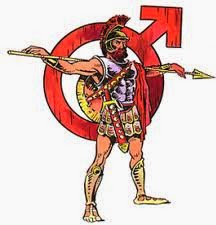 “Hello, I am Mars. Before humanity discovered Pluto, I had Pluto’s jobs because our energies are quite similar. The difference is that Pluto has a wider brush and tends to work with planetary and group issues where I, Mars, work on a more personal level. However, both of us focus on how energy is directed into the timelines of every reality. I focus on the masculine/outflow of energy, whereas my mate, Venus, focuses on the feminine/inflow of energy.

“In fact, Venus and I are on either side of our dear sister Gaia. It is our responsibility to assist her. Venus assists her by opening up her Violet Temples of Healing and Transmutations for humanity. I assist Gaia by guiding humanity into a calm and positive expression of their Martian energies. My Martian energy field has been used far too often for war and not nearly enough for creativity.

“While I travel in this energy field Libra, I am focusing on assisting humanity to find balance and justice. Most, if not all, wars are initiated or taken over by the Illuminati who pay for both sides of the war. Therefore, humans suffer, as well as the earth, air and water that suffers from the fire of the bombs used during the war. While the darkness that created the wars gains even more wealth and more power.

“While I, Mars, travel within Libra I can bring balance to this injustice. I am here to assist humanity to balance their thoughts/air and to remember that their EVERY thought travels out from their being with their EVERY breath. What if everyone who perceived themselves as ‘victim’ to war and violence shifted their thinking to their own power-within and breathed that energy field out into their reality?

“My Martian powers are immense and can be greatly constructive when used to create thought-forms of a peaceful and balanced foundational structure. Since I rule metals, which are created from the core of Gaia, I am here to assist you to constructively use the power within your thoughts to heal the many rifts on Gaia’s matrix that have been created by these unjust violence and wars.

“I remind you that it is imperative that YOU, the human guardians of Gaia, be strong. The greatest power that you have is the power of positive thoughts. You may not be aware of this inner power, but you—the stewards for Gaia—wrote a Divine Plan for how you would assist Gaia in your present lifetime. 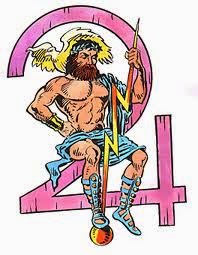 “Greetings, I am Jupiter speaking to you through the water sign of Cancer. I am ready to assist you to expand your consciousness by being conscious of your emotions. Emotions are like water in that they can flow in and out of you, seemingly beyond your control. It is quite true that your physical self has little ability to consciously master your emotions.

“As you have learned, things tend to change very slowly in the physical world. Hence, many become very frustrated at how much time the ascension process is taking. Frustration and impatience lowers your consciousness. Since it is your state of consciousness that directs your perceptions, when your consciousness lowers you perceive only the lowest frequencies of the third dimension.

“I was named after Jupiter, the Roman King of the Gods and the God of the sky and thunder. While Mars and Pluto are working on transmuting your personal and planetary 3D matrix, I will work on expanding your mind so that you can better perceive the 5D matrix. You have the power to perceive the matrix of the reality you are entering, as well as the matrix of the reality that you are transmuting.

“Can you release your doubt and fear to look UP into hope and re-birth? Just as I was the King of Gods, humanity is destined to be the protectors of Earth and the creators of the path to New Earth. You will not be able to fulfill this grand plan with third-dimensional consciousness. You need to activate your higher consciousness to perceive the reality to which you moving, and creating as your move into it.

“Your human destiny is very expansive. You must extend your consciousness to embrace your multidimensionality into the reality which you have volunteered to imagine, create, discover and inhabit.”

“I am Uranus. I create sudden unexpected changes that are based on your Divine Plan. As I speak to you through the sign of Aries, I am the harbinger of a new world. I embody your highest state of consciousness and your connection to your Multidimensional SELF. While I reside within the fire of Aries, I will assist you to find your “fire within” to BE the world you choose to live.

“Since our Grand Cross is formed at 13 degrees, and there are 30 degrees within every sign, our distant planets of Pluto and Uranus, will resonate to our present energy field for many of your Earth years. In numerology, 13 reduces to 4 and four is the number of building new foundations.

“Pluto will maintain its presence in Capricorn to assist in transmuting all world governments. Simultaneously I, Uranus, will maintain my presence in Aries to hold the ‘fire of change’ as humanity creates its new world. Pluto reminds you that your unconscious and superconscious mind creates your reality.

“I remind you that your earth vessel is merely one of the myriad expressions of your Multidimensional SELF that is wearing a body to experience life in form. Through connection to my energy field, you will remember your ability to rise above the appearances of the physical plane to commune and communicate with your higher expressions of SELF.

“More and more of you are channeling higher beings. I remind you that these higher beings are expressions of YOU. Yes, this higher being may be an Archangel and/or a highly evolved Galactic. Do NOT use that information to doubt your ‘channeling’ because your 3D indoctrination has taught you that you are ONLY human.

“Instead, please remember that YOU are ONE with all the multiverse. You are a beautiful and immensely powerful multidimensional being. Only a very small portion of your SELF is wearing an earth vessel in the reality you perceive as physical planet Earth.’ You have uncountable lives in numerous planets, galaxies and dimensions.

“I, Uranus, will remain in the Aries of new life, the spring of new beginnings, the first sign of the zodiac, to remind you that YOU have transmuted your energy field into Lightbody in myriad realities and multiple locations. Please, stay attuned to me so that I can remind you that you do not need to learn what to do for ascension.

“You were chosen to have the great honor of being one of Gaia’s planetary stewards because you have already ascended. If you remain connected to me, Uranus, I will assist you to remember the many higher expressions of your Multidimensional SELF. 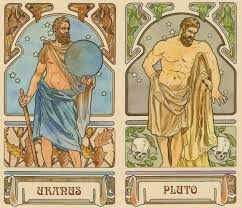