The Beginning of the Ending - Arcturian Campsite Message 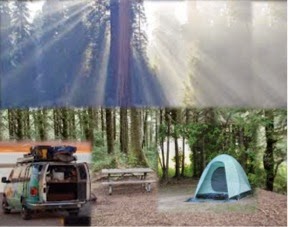 JASON SPEAKS:
Somewhere in the midst of all that Sandy has told you, we also planned our route to our first destination, the Pacific Ocean. We decided to camp as often as possible so that we could be closer to Mother Nature. We were too excited to camp at what we had determined as our first camp, so we drove all night and started our adventure at our second campsite.

We arrived there early in the morning, chose our site, crawled back to sleeping area at the back of our new van and instantly fell asleep. The Camp Ranger who wanted our registration and payment for the site awakened us in just a few hours. We were still so excited that we could not go back to sleep and began setting up our site.

We had discussed that we would stay at this site for a few days to relax after all the excitement of the last two months. However, we did not expect the emotions that arose as soon as we had stopped our busy activity and realized the massive responsibility of our mission

We both felt at a point of transition in which we were terrified, excited, relieved, sad and jubilant. Because our emotions were so diverse and intense, we could not settle into happy. We had brief moments of happiness, but then our confused thinking came in to disrupt that peaceful moment.

All our lives we had been seeking, searching, healing and working. Hence, we did not know how to create and accept a life that was NOT based on “working hard to achieve.” Of course we had had our wonderful adventures beyond time, but we did not create that life. We had changed our lives once we came to our cabin, but we still had to work. Now the financial support of our mission had easily entered our life, but had no idea as to how we could start.

After our tent was pitched and our site totally set up for our stay, the doubt and confusion overtook us and we entered the tent to “take a nap.” Instead, we both went into a deep trance and actually saw the Arcturian in the small tent with us. It was in Its primary form of a cloud-like being with flickering stars, but Its usual size was condensed to fit into the tent. Our trance deepened further as the Arcturian spoke to us.

“Did you forget that we have been assisting you for your entire life? We see that you are both at the biggest crossroads of your lives. You are about to do that which you have always wanted, but were always afraid to attempt. And what are we talking about? You are about to LET GO!

“We are not saying that that was a bad thing. There are not bad or good things in the reality that you are NOW creating. There is only life—the life YOU have created. You have created a wonderful life for yourselves, but now you will create a life for your Multidimensional SELVES on physical Earth. In order to fulfill your mission, you must totally surrender to the ONE of the NOW.”

“How will we do that?” we both asked with our thoughts.

“In order for you to commune with all life, beginning with the elements and elementals, you need to become Master of your energy field. As you are now aware, you are both physical expressions of Mytre and Mytria who ascended into fifth-dimensional consciousness long before your present timeline.

“We say ‘serving’ because your Ascended Masters SELF no longer needs to take an earth vessel for experience. You only take an earth vessel for service to the planet on which you have taken that form. As an Ascended Masters you no longer need an earthen vessel to evolve, learn or expand your consciousness. Your evolution, learning and expansion no longer occur in the third/fourth dimension, but in the fifth dimension and beyond.

“However, the earth vessel that your ascended SELF is wearing can become confused. You see, in a reality in which you have moved into initiation for ascension, you generally really enjoy your physical life. Of course, the Piscean Age is filled with stories of the great suffering of the ascended ones, but that is only because of the level of perceptions of those who observed their ascension.

“For one thing, the Piscean Age was about ‘worshiping’ the higher forces. Since the Kali Yuga, the last 2000 years of the Grand Cycle, is furthest from the light, it is focused primarily on the dark. It is the cycle in which the polarities are the most extreme and the Truth is the most distorted. Fortunately, you and all the other Masters returning to their true SELF are free of the shackles of the Kali Yuga.

“You are now in the Golden Age in which entire societies, and in your case the entire planet, can ascend beyond the illusions of polarity. Free of the illusion of polarity you can remember how to perceive what is in between what you had formerly observed as opposites. In this manner, the ascending ones can find that center place of peace and unconditional love and choose to live there.

“Since entrance into the Golden Age has just occurred within your illusion of time, your human ego is still accustomed to being at the helm of your life. In order for your higher expressions of SELF to replace your ego as Captain of your earth vessel, you must unconditionally love your ego, unconditionally forgive your ego and unconditionally accept your ego.

“Unconditional acceptance can be confusing. Acceptance of your self for exactly who you are NOW is an entirely new concept that was NOT in existence during the Kali Yuga, which recently ended to your human sense of time. For most of your present incarnations, as well as most of your incarnations within the last 2,000 years, you had to become better because you were never ‘good enough.’ This logic already seems flawed to your expanding consciousness, but remember now how true that was before your awakening.”

I know that both Sandy and I had thought of our selves in that manner. Our transition from “not being good enough” to “loving ourselves unconditionally” occurred during the time we spent in with our own higher expressions of SELF.

“Yes,” continued the Arcturian, “And now your world is on the cusp of NOW meaning NO TIME. For more earthly lives than you could count, now meant it was ‘time to do something.’ Hence, the shift into NOW meaning ‘no time’ is very novel to the third dimensional memory of your myriad incarnations in timelines before this Golden Age.

“In your other incarnations on Earth, now meant that something should be done. This cognitive shift from now meaning you have to do it now, to NOW being the no time of the fifth dimension and beyond can be difficult for our brave inhabitants of ascending Earth. Therefore, they can become overwhelmed by all they have to DO in order to ascend.

“In fact, the action of ‘doing’ is transmuting into the knowing of ‘being.’ Through all your physical incarnations on third/fourth dimensional Earth the state of being was NOT an action. You had to use your muscles, your labor, your concentration and actions to create something in your reality.

“If your emotions are loved-based, but your thoughts are fearful, you will be pushing the accelerator with your other foot on the breaks. Many of our ascending ones find themselves in this situation. Do you remember that when you were first learning a difficult task that you could not talk while doing it? You could only do the new task. If you added another task, your concentration was disrupted and you could not effectively continue that new task.

“Your computer would become so confused that it would likely crash. We see that many of ascending ones are feeling as though they will crash. In fact, you all will crash and are crashing on a continual basis, which is why your thoughts are both illumined and confusing while your emotions run from joy to fear.

“You are in the process of shifting from the operating system of your third dimensional brain into the operating system of your multidimensional mind. Therefore, both systems are in great transition. During this transition you will have brief moments in which these two brains are in alignment. Within that moment your multidimensional mind can connect through your third dimensional brain to create feelings of euphoria and higher creative thoughts.

“It is these moments of temporary connection that you get a glimpse of the new LIFE of the new YOU. Your challenge is when your two operating systems fall out of alignment and you “crash.” We remind you now, in these first moments of your crash landing back into your 3D self, commend yourself on your temporary alignment. Then, remind your self that ‘practice makes perfect.’

“Send your 3D self some extra unconditional love, unconditional forgiveness for temporarily falling out of alignment and unconditional acceptance for the immense process that you volunteered to undertake. Remember that it was the Ascended Master YOU who volunteered to assist dear planet Gaia, upon whose body you have worn different earth vessels during myriad physical incarnations.

“There are also Ascended Ones who are new to Gaia. They have come to Earth NOW because it is their special service to aid all life forms to ascend back to their higher expressions of SELF. Whether it is your first incarnation on Earth or one of your many earthly incarnations, YOU have volunteered to assist with the vast endeavor of releasing the shackles of the habit of being ONLY physical.

“Whether our volunteers are new to this experience or have lived it for decades, they are ALL together in the NOW of the ONE. Therefore, we ask that you look into your life with the eyes of unconditional love to see those who have also volunteered to assist Gaia with Her transition.”

The frequency within the tent had made it very hot inside. As Sandy and I quickly stepped out of our tent and into our shady site, we bumped into the person who came to help Gaia, and us. It was our Lemurian friend, Lantern.


MESSAGE FROM SUE:
A lot of the message that Sandy and Jason received in their tent I received in my living room. The messages that I have been getting from the Arcturians lately are moving into something new, but I do not how to describe what that something new is. I know what I hope it is, but because I hope it is something I am not sure if it my interpretation because I want it to be that, or if that is what the Arcturians meant. Therefore, I just present the messages as I get them and let you readers make that choice for your selves.