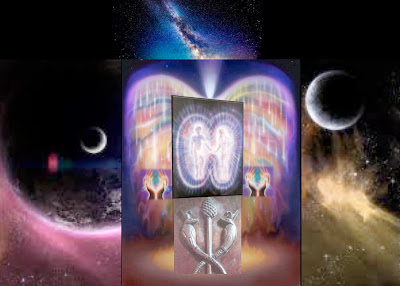 SANDY CONTINUES:
While Jason and I sat around the table eating our brunch, we talked about my dream and our confusing feelings about Mytrian.

“I am so happy that I had this dream and the intimate experience of being with the Arcturian,” I said as I sipped my coffee. “I have to admit that I have really missed Mytre and Mytria. Have you had any more of your dreams about Mytrian?”

“Yes,” responded Jason. “In fact, just a few days ago I had a dream in which Mytrian was with the Arcturian. However, I am still having difficulty understanding how one person or being, as I am not sure Mytrian is a human, can have all those different component of SELF.

“I mean, supposedly you and I are part of Mytrian’s Multidimensional SELF, which includes Mytria, Mytre and the Arcturian. How can that be?  How can one being hold that many different frequencies of consciousness in one form?”

“I have wondered that myself,” I replied. “Also, I felt such confidence and security from Mytre and Mytria, but Mytrian seems almost as confused as I am. However, since my merging with the Arcturian this morning I am beginning to understand the concept of a composite, multidimensional self. However, I can’t translate that understanding into words. In fact, more and more now there are concepts, experiences, emotions and thoughts that I put into words.”

“My dreams about Mytrian, or maybe they are experiences with Mytrian, seem to be focused on Mytrian’s attempt to fully merge with Its multidimensional expressions of SELF. In fact, I dreamt a few days ago that Mytrian had bonded with Mytre and Mytria while on the Mothership. Then just night before last, I dreamt that Mytrian merged with Its Arcturian SELF.”

“Why didn’t you tell me that?” I asked with hurt feelings. Usually Jason and I talked about everything. However, lately we seemed to have been moving apart.

“Yes,” said Jason as he reached for my hand. He was reading my mind again. “I too have felt as though we have not been as close. Do you think that we became to dependent on Mytre and Mytria for our happiness?”

“They did express that concern,” I replied. “I think that they were right. Now that they are not as actively in our lives, you and I have fallen into the drudgery of daily life. I am so sorry that I have not been connected enough to you to realize that you were having such informative dreams. Then, I have one dream and you listen to every word. Why did you not share your dreams with me?”

Jason took a look time before he answered my question. I could tell he was trying to find the kindest way possible to answer me. I bit my lip to stop myself from talking, but also from fear of what he would say. Finally, I could wait no longer. How could such a wonderful morning deteriorate so quickly with just one short conversation?

Instantly, I felt the Arcturian energy within me again saying, “The greater light unveils all secrets.” I should have been comforted, but instead I became more afraid. What if Jason does not love me anymore, and he is trying to find a way to break up? Maybe I will have to be alone now. “NO, NO,” I cried inside my heart. My greatest fears were definitely being revealed to me.

I was about to cry when Jason took my hand and said, “Don’t be so upset. I love you and do not want to leave you. It is just that I sometimes feel like I have left my SELF.”

I decided to take the higher road and forget about my fears and give comfort to the man who had just been so wonderfully supportive to me. I held on to his hand and looked into his face. “I am glad you feel you can talk with me now. I am ready to listen and will be quiet while you speak.”

When I saw the look of relief on Jason’s face, I realized how much I had dominated our conversations. How could I have not noticed how he felt? How could I have been so selfish? I wanted to tell him that, but decided to keep my words inside for now and remain quiet, no small task for me. Fortunately, Jason finally spoke.

“Thank you for giving me some time to gather my thoughts. It seems that lately my mind is traveling so much faster than my body that I can hardly keep track of my self, much less you. I have been needing to spend some time to just be with my self instead of sharing everything with you. I think that is why I did not share my dreams. Also, I knew that you were having trouble with accepting Mytrian as a component of your SELF, as was I.

“However, I have felt a deep empathy for Mytrian’s plight. Perhaps, because I was struggling to maintain a deep relationship with my SELF and you at the same time, I could better understand the confusion of Mytrian. Even though they are a collective, multidimensional being with full awareness of the many dimensions of their SELF, they were not given any instruction as to how to handle such a confusing energy field.

“Since I can barely navigate a deep love relationship with you and my own SELF, I was comforted to follow the evolution of Mytrian. I guess that is why I have been dreaming about them so often. But now, my truth has hurt you, I can see it on your face.”

“What is on my face is MY issue,” I replied, not without a degree of anger. “I too have had problems living in the physical while also communicating with galactic beings. Then, those being left, and I felt totally abandoned. I had a few dreams about Mytrian, but I placed my anger of abandonment from Mytria and Mytre on Mytrian. I now realize that I have placed it on you, as well. That is why you have not felt safe sharing more deeply with me.”

Jason was quiet for far too long, but I managed to contain myself. In fact, I actually called upon the Arcturian to remind me of the wonderful experience I had just had. Yes, what goes up comes down. Also, I did not want to crash into my humanly hurt feelings.

I had made it difficult for Jason to be himself with me. “Your insecurities demanded his attention when you should have given him loving freedom,” I heard my High Heart say. Yes, of course my High Heart was correct. I had been loving Jason from my hurt feelings, rather than from my High Heart, which actually hurt his feelings.

Calling again and again for Arcturian assistance, I sent waves of unconditional love to Jason. As I sent this love, and as he obviously accepted it, we silently slipped out of time. It seemed as though we sat at the table for a lifetime just holding hands and looking into each other’s eyes.

When I became fatigued with sending unconditional love, I realized that I could not send it without feeling it within myself first. It was then that I began to feel that my gift of unconditional love was returned back to me. I wondered if that were the same for all emotions and instantly my High Heart said, “YES.”
As I sent my timeless gift to Jason, and my self, I could feel my consciousness back on the New Earth I had just visited. I could see the distant mountain, the lovely valley and the Temple. While I was connected with Jason via my hand and heart, I took him with me as we walked up the golden stairs and through the opened golden door.

This time the Temple appeared dark, as though it was waiting for us to create our experience together. It was then that Jason broke contact and began to sob. I pulled my chair right around next to his and put my arm around him. Since we were still beyond time, I have no idea how long he cried and how long I silently comforted him.

Finally, he looked up into my eyes again and said, “That was the most wonderful gift that I have ever received. I realize now that I was so afraid of losing you that I focused on losing my self. Oh, the webs of deception we weave.”

“The truth is,” Jason calmly said, “I could never leave you, as we are ONE.”