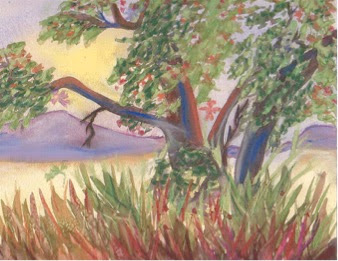 We are the Golden Ones, here with you all within this NOW. As you may remember, we are Gaia’s highest expression of SELF. We maintain the frequency spectrum of Gaia’s many versions of reality while she continues Her Ascension Process.

From our perspective on the Threshold into the fifth dimension, we can see the entire spectrum of our dear, Grounded One’s collective ascension experiences. This “spectrum” represents a huge spectrum of light/realities.

From our multi-dimensional perspective, there is NO difference between “Realities” and “Light” because all reality is light and light creates all of reality.

All reality is created by projections, angles, and frequencies of light that are magnetized into your Third Eye and High Heart to be fully transmuted into the illusion of an “external reality.”

While you are wearing your third dimensional Earth Vessel, it is easy, and natural, to perceive your self as a human who has a Soul. However, from our perspective of the Golden Ones, we perceive all reality as various configurations of swirling light.

This swirling light is multidimensional. The variations of color and the forms created by the myriad light projections are beautiful to behold. Within this NOW, we wish to inform you that we also have another Service.

You see, ascension is much like leaving the stadium after a huge event. However, YOU are the creator of the event, the star performer of that event, as well as the director and producer of that event. Also, you have created many “events,” which we perceive as “incarnations into a physical, earth vessel.”

The NOW of your current reality is very special because the ever rising frequency rate of your planetary Mother Gaia greatly facilitates your ability to expand your consciousness beyond the limitation of your third/fourth dimensional earth vessel and into what humanity has believed to be the Threshold to the Fifth dimension.

We, the Golden Ones, resonate to the frequency of this fifth dimensional threshold and into what you have often called “New Earth.” We have located ourselves on this threshold so that we can best serve to assist all the Ascending Ones to remember, and clear, every incarnation they have ever taken on Gaia.

By the word “clearing” we mean, “balancing” all the energy fields of all your incarnations to the extent that you can gain and maintain an energy field of the highest frequency of mind and body, that you experienced during all of your many incarnations.

Just as one needs to take all their “stuff” when they move to another house, you will need to take (transmute) all your karma. By “karma” we mean the collective energy field that is the resonant frequency of all the incarnations you ever experienced.

Once you have expanded your consciousness to the frequency of our Golden Portal, we will assist you to “over light” every reality you ever experienced in all the incarnations that you experienced on Gaia. From our point of perception, these realities are all unified into ONE swirling energy field.

This energy field is the sum total of every incarnation, or visits to Earth, you ever experienced in the sum/total of ALL your 3D/4D incarnations. From the perspective of your third/fourth dimensional consciousness, you may think that there are only a few who would be in this group.

However, we The Golden Ones, want you to know that there is an ever-expanding, Golden Energy Field that our “graduates from 3D” are learning to maintain infinitely via their collective consciousness.

It is within that NOW that you will need to TOTALLY transmute any dissonant energy patterns that you may have left on Gaia from any of your third or fourth dimensional incarnations.

We also wish to remind you to leave your gift of Unconditional Love and Violet Fire in any of the times or dimensions of reality that you have visited as a, “Thank You, Dear Gaia for allowing us to enter your multidimensional portals.”

These multidimensional portals have always existed on Gaia, but usually only “primitive tribes,” animals, birds, and insects could maintain a connection with Gaia that was innocent enough to be able to UNDERSTAND what Gaia’s opened portals were saying to them.

By the term “innocent connection,” we mean a connection that is as open and honest as that of a small child. We, the Golden Ones, have observed how many humans have lost their ability to look through the innocence of Heart and Mind as they begin to “mature.”

During primitive realities and peak societies, Nature was beloved and protected by humanity. Therefore, Nature had NO fear, which was largely because the people had NO fear of Nature.

To these innocent, or expanded people, Nature was a huge living being that spoke to them through the weather. To them, a storm did not mean that something was bad. Instead, they realized that after the storm was over, all that was not strong enough to remain attached to their roots was ready to return Home to their Sky Gods.

They also noticed how the young trees with healthy roots could bend with the wind. However, the older trees, which were more brittle, and the trees with unhealthy roots, were pulled from the soil.

Then, the “dead tree” lying on the ground became the home form many insects and other creatures that needed a new home after the storm. Nature does not “kill.” Nature “recycles.”
When something, or someone, has become too ill, or too old, to contribute to Gaia, they are released from their physical earth vessel and return HOME to their Spirit.

Then, after the Spirit has shared all that it learned while in physical form, and has re-visited its higher dimensional home, the Spirit decides if it wishes to:
Take another earth vessel,
Return to their fifth dimensional Star Ship or Homeworld to learn more,
Or assist those on Earth from the higher dimensions,

In earlier eras on Gaia, there were many Shamans and Awakened Ones who could read the Light Language sent to them from those who resonated to the higher dimensions.

They could receive these messages via the Light Language that Gaia spoke with Her third dimensional weather, Her fourth dimensional dreams and meditations, as well as Her fifth dimensional Soulful yearnings.

All Light is shared with All Life. However, only those who are willing to expand their consciousness enough to be able to perceive the Light Language that constantly swirls above, around, and through them, are even aware that Light Language exists.

Light and reality are ONE. Light creates reality, but each reality can only exists for as long as it can capture and contain enough light to “feed” the energy field of that reality.

Reality is constructed of the sum/total of light and matter. Light is necessary to create, contain, and disburse itself through a given energy field. However, in order for light to create a reality, it must bond with some frequency of matter.

It is the bonding of light (which includes all mental and emotional constructs) with matter (which is the “building block of life”) that creates and maintains an ongoing reality. We, the Golden Ones, can assist Gaia’s transmutation by directing our multidimensional light through Gaia’s opened planetary portals.

It is the residents of Earth that must maintain these open portals through which our higher light can flow. As we, the Golden Ones, direct our multidimensional light through these opened portals, Gaia’s transmutation into Her fifth-dimensional, planetary expression will begin and be maintained. It is no coincidence that so many of you humans on Earth are openly talking about ascension into their fifth dimensional expression of SELF.

In fact, this “concept of ascension” has filled the consciousness of many humans because you, the members of humanity, are consciously, or unconsciously, receiving the Light Language messages that are increasingly flowing into your reality within this NOW.

In the same manner, you will learn Light Language from your family of Earth’s inhabitants, as well as from your higher dimensional Galactic Family. Humanity has been praying, chanting, meditating, etc., in order to increase their ability to speak with the higher planes of reality since the dawn of time.

What is changed is that, as Gaia’s frequency increasingly rises, many fifth dimensional beings, who have been waiting for the NOW to assist with planetary ascension, are taking earth vessels.

What we mean by, “embracing the NOW of each moment,” is that YOU have a choice to calibrate your attention to the dimension of your choice. You NOW have a choice to expand your “range of conscious perception” to encompass the third, fourth AND fifth dimension.

The awakened adults of your NOW have been studying, communicating, learning and meditating for decades so that they can expand their consciousness, as well as their perceptions, beyond the outer, daily life of the third dimension.

Within this “time” that YOU have created for your SELF, you are choosing to construct a life that involves personal and group creative expression, time with nature, lively conversations with friends and family, and remembering how to inter-act with Gaia in the same manner that you would interact with a human.

Would you throw your trash at a human’s face? Would you walk past a human friend and forget to say, “Hello, how are you doing today? Would you have a drink of water without offering a glass of water to your friend? Would you take your trash and dump it on your neighbor’s front yard?

How often have you found the “time” to do something for your planet, or even for your fellow man, or even an animal in need?

We are proud to say that more and more of you can say,
“YES, I just did that the other day.”

We, The Golden Ones, want to share with you that there is a “line forming” at our fifth dimensional threshold. Every day, more and more Multidimensional Beings are peeking out of their 3D earth vessel to say,

“Good Morning Mother Gaia.
Today I vow to remember that
I AM YOU
And YOU, Dear Mother Gaia, are ME!

We, the Golden Ones, invite you all to begin your day with the above short sentence. If you do so, you will likely discover two things:

How often would you forget to say “Good Morning!” to the people that you live with?

We, the Golden Ones, remind you to begin your day by saying,
“Good Morning Golden Ones!”

By that simple statement, you will align yourself with us,
“The Protectors of the Portals to fifth dimensional Earth.”

We ask that you then align your physical, self with your physical planet. So that,
The Golden Ones,
The Humans,
Planet Gaia
Can work as ONE to ascend Earth into Her fifth dimensional expression of New Earth!

We, The Golden Ones, welcome you to our Threshold and will assist you to join us.