What Is Lightbody? -- The Arcturians 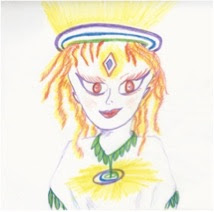 As your “junk DNA” comes online, which it is doing day-by-day, more and more of your Lightbody will be revealed to your third-dimensional consciousness. Those of you who have meditated to the extent that you can consciously connect with your gamma wave consciousness have had fleeting experiences of “being Lightbody.”

Therefore, you do not “create” your Lightbody, but you “return” to your Lightbody. You, the ones who took an earth vessel to assist with Planetary Ascension, are remembering that this “return to your innate Lightbody self” was planned before you took this incarnation.

In fact, you volunteered to take this, particular and very important, incarnation because you knew that Gaia had the Possible Reality of flashing into a fifth-dimensional “Light Planet.” All of Gaia’s kingdoms are ready for frequency shift, except for humanity.

The very evolutionary cycle that made humans the “dominant species” of planet Earth, also attracted many beings who wanted to “hitch a ride” on the ascending planet. However, because some of these “others” have selfish, and too often “power over others” states of consciousness, they have actually served as a breaking mechanism.

This “breaking mechanism” has greatly delayed Gaia ascension, which was the intention of the Power Over Others members of humanity. This, “one bad apple” does NOT spoil the bunch, but they have greatly delayed the process of Planetary Ascension. Their energy field of “power over” has dominated Earth for far too long.

However, “power-over-others” can only rule by fear. Hence, once the ascending ones can send these lost ones the antidote of Unconditional Love and the Violet Fire, not only will the lost ones lose their power-over, but some of them will, and have, returned back into their own “Core of Light.”

This Three Fold Flame provides every one who is wearing an earth vessel the ability to remember and activate their innate flames of Unconditional Love, Infinite Wisdom, and Multidimensional Power.

It is the activation of the inner Three Fold Flame that directly activates the “Flash into Lightbody.” We say “flash,” as you will likely perceive your transmutation into Lightbody as a flash.

You will feel like you have experienced a flash. The flash is actually that you have lost “space-time” and go into the “no time” of the fifth dimensional Now.

Much as you may see a “flash” in the sky, which is often accompanied by a loud sound, when a flying object “leaves the time barrier,” your transition from your time-bound earth vessel will “flash” as it leaves the third dimensional time barrier to return to the NOW of the ONE.

Once your consciousness and form resonates to the timeless NOW of fifth-dimension and beyond, your clay vessel instantly transmutes into a vessel of light. Remember, dear emissaries to Earth, you will not “become Lightbody.” You will “return to Lightbody.”

Many of you, our emissaries to third/fourth dimensional Earth, are beginning to consciously perceive sensations within your physical form and higher dimensional perceptions of the ever-changing reality in which you live.

These people were largely “refugees” from the Great Galactic War, which raged long before your could measure via your earth time. Earth was much younger then and Gaia had not yet experienced the dark intentions of “power over others.”

She had completed the wonderful cycle of Pan, to be followed by Lemuria and Atlantis. However, as all those primarily fourth dimensional and beyond worlds collapsed, Gaia spun downwards into the lowest sub-plane of the resonance of the third dimension. She has been “stuck” in that frequency for a very long “time.”

Fortunately, Gaia has completed Her darkest hours and is preparing to return to the higher frequencies of reality. However, those who cannot transmute their third dimensional clay vessels will not be able to join Gaia in her expression of Fifth dimensional Earth.

Gaia, with her great dedication to her human inhabitants, has waited as long as She can. Her physical form has been too wounded, mostly by humanity, and she must return to Her fifth dimensional expression to heal.

Since time is an illusion of the third and fourth dimension, we have chosen to release all plans of where this projection will be until the NOW of our ONE. Please remember that our NOW has no “time.” as you know it on your third dimensional planet.

However, our volunteers lowered their frequency into the third dimensional frequency of Earth to take an earth vessel. They chose this sacrifice to assist Gaia to remember and return to their true multidimensional nature. These volunteers are NOW allowing themselves to awaken to the inter-dimensional memories that have been stored in their High Heart and Third Eye.

When we say, “flash,” we do not mean that you will be surprised or unprepared. When we say “flash,” please think of our preceding analogy of a plane leaving the time barrier. As we have said, it is the leaving of third/fourth dimensional time that allows you to enter into the NOW of the ONE.

We will expand on this information later in your “time,” as we wish to complete this transmission with some symptoms of transition that we perceive many of our earthbound ones experiencing:

1.     As we have stated, the increasing confusion around time is greatly accelerating.

2.     Distaste for that which is bound by sequential time is becoming increasingly arduous and even          boring.

3.     Duties that require the logical, sequential, and regimented responsibilities and duties are becoming increasingly tedious.

4.     Frequent “day dreaming” of another place and/or reality that is just beyond your full, conscious memory.

5.     The increasing movement towards perceiving all reality as “alive.” Hence, there is an increasing focus on animal rights, ecology, and return to nature.

6.     Multidimensional perceptions are coming online, not just in meditation but also in daily life.

7.     A need for and dedication to meditation. The inner focus on mediation makes their body “feel” different.

8.     Your perceptions expand beyond that which is “just physical.”

All of the above inter-dimensional abilities, and more, are becoming increasingly common. Best of all, more and more people are beginning to follow their inner urges and document that which they are experiencing.

Best of all, like you, they are sharing these experiences with others.

Beings who have ascended beyond the third dimension often briefly return to the physical world to show others that a transition into Lightbody is possible. Perhaps YOU will be one of those beings.
Perhaps, you already are!


The Arcturians
Posted by Suzanne Lie at 5:55 PM