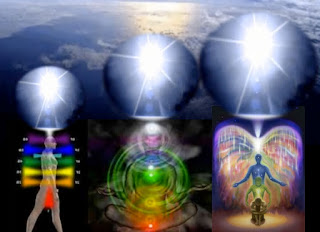 Dear Ascending Ones,
As you continue your process of returning to your Multidimensional SELF, you will be releasing the components of your self that are no longer needed. For example, as a child you needed someone outside of you to tell you what to do. However, now that you are an adult, you are able to listen to you own inner voice.

Since you are returning to your Multidimensional SELF, the choices and actions of your ego are no longer necessary or enjoyable. Therefore, you will be placing more and more of your attention and intention on the SELF to whom you are returning. This shift of focus so expands your consciousness that you are beginning to remember your innate multidimensional thinking and expanded perceptions.

As you continue this metamorphosis the small voice of the Divine Child calls out, "Take me with you." We remind you to welcome your Divine Child and realize that he/she has always been within your High Heart. Your Divine Child became the one you identified as yourself before you began your process of ascension. Now that “Child” can lead you into your SELF.

Your Divine Child represents your first eight cells that are stored in the ATMA of the Three Fold Flame of your High Heart. Within these first eight cells is all that you have learned from your many incarnations on physical Earth. These eight cells also hold the pattern of lives in which you ascended (returned to SELF) in your other incarnations.

During this era of planetary transformation many ascending ones will be acknowledging their Divine Child who remembers all their past ascensions. More and more ascending ones are choosing to connect with the fifth-dimensional threshold world even though they could move on into higher dimensional realities. They are making this choice in order to participate in the great honor of assisting with the creation of New Earth.

Please remember that in every version of the fifth dimension and beyond there is no time. Therefore, you are returning to a reality that has always existed and is simultaneously in the process of creation. In fact, whenever you travel inter-dimensionally, you enter a new reality by calibrating your consciousness to the resonance of that world. Then, when you merge your great multidimensional essence with that world, it re-sets the entire reality. This reset creates new options and opportunities that did not exist before your entry.

Thus, your entry into a reality that has existed beyond time is re-created by your presence. Do you see dear ascending ones how much power you have within you? The contribution of your essence has the ability to alter an entire way of life. In fact, even within your time-bound earth vessel you influence the Collective and Planetary Consciousness of Earth with your every out-breath. Conversely, the Collective and Planetary Consciousness of Earth are influenced by your every out-breath.

Your breath has great power. Your first breath at birth indicates that you were alive (logged into the 3D Game) and your last breath at your death indicates that you are dead (logged out of the 3D Game). In other words, the Spiritual Essence of your breath enters your form at birth and leaves your form at death. However, since you are your spiritual essence, you are not born, nor do you die.

It is your form that is born and your form that dies. Remember that in order to enter into a form-based reality, you must first create a body based on the molecular resonance and configuration of that reality. Then when your body is fully formed, your Spirit enters that form.

Your earth vessel must then adapt to these higher frequencies of energy. Often this adaptation begins by releasing that which was part of the self that you pretended to be. Once you have released the aspects of yourself that have become too low of a resonance for your transmuting form, you will be able to exhale your higher frequency of breath into Gaia’s world. Hence, you will share your transmutation with Gaia, just as She has shared Her transmutation with you.

Simultaneously, the great mass of Gaia's ascending body contributes to your personal ascension. Then, you also gain the additional benefit of a peaceful transition into New Earth as you are surrounded and protected by the entire ascending planet.

The challenge with this configuration of ascension (as there are many versions of ascension) is that you could easily doubt that you are ascending because you are not leaving anything. If you ascended beyond the planet, you would pull away from that reality and feel as though you are leaving Earth. Then you would have physical evidence of your ascension.

However, depending on physical evidence is not consistent with ascension. Instead, it is best to release your egos need for proof and trust you inner knowing that, since you and Gaia are ONE, you are both ascending together.

In this fashion, THE RETURN involves both people and planet.

Multidimensions.com and Dr. Suzanne Lie Presents
THE RETURN
of our Spring Seminar ~ April 5, 6 &7

Join us as we plant the seeds for THE RETURN to our true Multidimensional SELF. The small seedlings are peaking just above the foundation of who we pretended to be.
Now we begin THE RETURN to who we ARE!

SATURDAY
MORNING
Meeting Our Higher Expression of SELF
Journey through the Fourth Dimension
Symptoms of Transmutation for 1st, 2nd and 3rd Chakras

(Each section of the program will begin with group instructions, which will be followed by meditations to gain a deeper insight on the information. Then everyone will split into small groups to intimately discuss their inner experience. A spokesman for the small group will then share the group experience with everyone.)

Aldersgate is located close to the ocean in Pacific Palisades, California, just north of Santa Monica and south of Malibu. The closest airport is Los Angeles Intl. (LAX), about 19 miles south.

Can’t make it in person?  Join us from the comfort of your home via our

which includes a chat room where you can communicate with other online participants.


We look forward to seeing you!