Transmissions from the Mothership 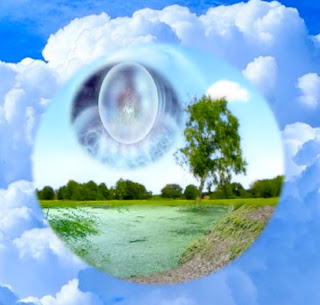 MYTRE SPEAKS:
Mytria and I arrived at our next meeting in the holosuite wearing our lower-fifth dimensional Pleiadian bodies. The Arcturian was more than ready for us and instantly said,

“We ask you to again expand your consciousness into your true, formless state of swirling energy. You will find that the more you have this experience, the easier it will be to understand it. Hence, please surrender into a repeat venture into your swirling pattern of light. Remember that this expression of your SELF is the predecessor of your current expression. Thus, you are not creating this version of your SELF. Instead, you are acknowledging that this YOU infinitely exists and is always available for your to Surrender INTO. Therefore, let us now return to our swirling patterns of light..."

Mytria and I again observed as the Arcturian released its translucent shell and returned to its true expression. Again, we were quickly absorbed into this energy field like two small clouds blending into a larger one. At first, we only experienced the Arcturian's energy, but soon we could feel our own swirling energy patterns. Mytria and I were so completely linked that I can speak of her experience as if it were my own. This time I realized that Mytria and I had very similar, yet slightly different, energy patterns.

"Your energies are so similar because you are Divine Complements. Hence, each of your patterns augment that of your Complement's," the Arcturian telepathically responded to my observation. "In fact, as you become accustomed to this expression of your Beingness, you will realize that every Being's pattern is slightly different. This phenomenon is similar to earthly snowflakes. However, the difference between each snowflake is not evident until they observed on an atomic level.

"We of the worlds beyond form can perceive the minute differences between our friends and companions within the ONE because our perceptions are both multidimensional and quantum. Hence, we can perceive into the quantum world, as well as the Source worlds of the eleventh and twelfth dimensions. However, just as you must expand your consciousness to perceive our world, we must expand our consciousness to perceive the Source worlds.

"We would like to display for you a picture of how your entire Galaxy, as well as other surrounding Galaxies, are expanding into higher expressions. These Galaxies are advancing their primary state of consciousness into the higher-fifth dimension and beyond. This expansion allows all the higher expressions of reality to also advance into higher frequencies, as well. For example, we Arcturians who have primarily resonated to the eight through tenth dimensions are expanding our primary resonance into the Source of the eleventh and twelfth dimensions.

"We are all shifting into higher expressions of our SELF. Just as you can also maintain a physical form while your primary resonance is the mid-and-higher fifth dimension, we Arcturians can still commune with our ascended ones from the eleventh through twelfth dimensions. However, you will eventually release most of your attention from the third and fourth dimensions, and we will gradually diminish our attentiveness of beings in the fourth and lower fifth dimensions. "

As I was receiving the Arcturians message, I could feel Mytria and I blending completely into ONE energy pattern of swirling light. We each had our own Divine Spark, much like the proton and the electron of an atom, but WE were fully merged into one "atom." It was very comforting to feel how our feminine energy intermingled completely with our masculine energy. In fact, we experienced our SELF as being androgynous with perfect balance between our inflow/feminine and outflow/masculine expressions.

As ONE Being we observed as infinite swirling lights entered our perception. They were all ONE with us and with each other, yet each swirl had its own Divine Spark. As we communed with these Swirling Beings we felt a sensation of ever-escalating expansion, as the Swirls, including our own, extended their energy field into higher and higher frequencies of reality.

Within the NOW of the ONE we extended our consciousness into realities that were far beyond our former perceptions. Yet, all these realities had specific expressions of cosmic life. We were amazed at the variety of creation that lived beyond the conceptualizations of a being encompassed by form. We tried to remember every world that flowed around and even through us. However, we knew that a brain or even a mind could not contain this information.

Instinctively we knew that we could only partake in this emergence of variation within unity and inspired manifestations of life while in this state of consciousness. We now understood what the Arcturian had said about time and space, as it did not exist within this resonance. There was only the Infinite NOW and the Sensation of HERE. We had no desire body to want change, yet all life wafted in and out of differing patterns of light.

Each pattern created a unique sensation, which we knew would have short-circuited our body, if we were wearing one. We had no curiosity or questions, as within our ever-changing swirl every question was answered before we could ask it. We flowed through different energy fields as they flowed through us. Just as the Arcturian had said, each Swirl of energy had a signature frequency that always felt familiar.

Then, suddenly our Swirl began to move away, and we knew that the Arcturian was teaching us a more advanced form of bi-location. Thus, we settled into the movement, which was simultaneously the stillness. Within this state of consciousness, all polarities were united into ONE, and we could simultaneously live every alternative and parallel choice. Through this experience we came to realize the true meaning of the ONE, and knew that the Oneness was completely natural and totally normal.

All of our old conceptions of realty were being released into a cohesive package of KNOWING. The sensations of bliss and unconditional love continuously flowed through our Beingness. Whenever a surge of bliss, love and total illumination begin to subside, a new swell would move into our consciousness like a wave on a planetary beach.

Oh, I thought of a world of form, and with that thought, we began to come down from the heights beyond heights. Mytria and I slowly flowed into two, yet totally connected, expressions of our one SELF. I heard my "I statement" and instantly missed being "we." I felt Mytria's agreement, but we both knew that we could no longer maintain that resonance.

"Yes," spoke the Arcturian "That is enough for now. We suggest that you go back to your quarters and meditate together. In this manner, you can assist each other to deeply understand your joint experience." With the close of that short communication, the Arcturian beamed away, likely back to its true Swirling Energy of SELF.

Mytria and I, now expressed as two separate, humanoid bodies, decided to take the long walk back to our quarters. We both knew that we needed to get grounded. In fact, we even stopped at the group Mess Hall, thinking that a hot drink and some food might make it easier to accept that we were again limited to a seemingly, old fashioned model of our SELF.

We both smiled at that description of what we once thought of as very sleek lower-fifth dimensional form. As we walked up to the door to the Mess Hall, we realized how one experience could change the way we thought about everything in our life. Coming to a familiar place and greeting our friends was exactly what we needed.

In fact, we spent the remainder of that "day" enjoying the camaraderie of people with whom we had shared many experiences. In fact, as we were leaving a large group of friends from a Pleiadian convoy entered the Mess Hall. Of course we had to visit with them too, so we drank Pleiadian tea and a drink much like human's beer late into the night.

Finally, Mytria and I returned to our quarters wondering about the amazing "coincidence" that our friends would arrive just before our mission to the timeline of the ascending Pleiades. Did the Arcturian know about this, we wondered? Of course, we smiled. Was there anything that the Arcturian did not know? Laughing, we shed our uniforms and slipped into our bed. We went straight to sleep and immediately entered a dream; or was it a different reality?

Either way, we found ourselves in a reality, which was totally unfamiliar. It was as if this reality was "in-between" where we were and where we were going. It was denser than the Akashic Membrane, but largely without form. "This is a bit disconcerting," I complained. "I wish there was some differentiation between land and sky."

Instantly, a distant horizon appeared and a cloud filled sky was above us. Mytria looked at me with at twinkle in her eye and said, "I wish there was a huge tree with a still pond just before it." Immediately, a tree and pond appeared before us. We walked over to the tree and found that it was dense to the touch with a rough surface. In fact, we both got sticky sap on our fingers. We went to the still pond to wash our hands and found the water warm and very inviting.

Within the same moment, we both jumped into the pool. Indeed, the water had a glorious feeling. We both had the impression that we could breath this water, so I tried it first and found it very enjoyable. Then, Mytria began to breathe the water as well, and smiled at the experience. We did not try to talk underwater because the water seemed to create an intense telepathic link between us.

This link was so strong that when Mytria mused, "I wonder where we are?" the very water seemed to answer, "You are here, within our forming reality. We are a reality that is in the process of being created. Hence, all of us Elementals are awaiting the thoughts of a Core Being to create a matrix upon which we can blend our forms."

"A Core Being?" Mytria and I both queried.

Mytria and I looked at each other in surprise. Is that what we had experienced? Had we actually experienced a connection with Source? However, there was no answer as the Water Elemental was asking us to go out and create a matrix for the Earth, Fire and Air Elementals.

"We have been waiting for Beings such as you," said the Water Elemental. We have been sent to assist with the formation of a new reality. We feel very honored to have been chosen to work in co-operation with the Core Beings to create a new world."