Trip to the Mothership Part VII 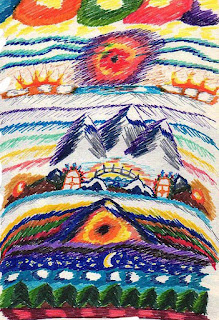 Fifth Dimensional Unity Consciousness
Individual consciousness is a microcosmic version of reality in which the least evolved humans perceive themselves as a separate, individual physical body. On the other hand, the most evolved human perceives his or her SELF as a member of the entire planet. At the lowest stage of evolution, the human has Individual Consciousness, which gradually encompasses more and more elements of reality until he or she has come into a consciousness of Unity with ALL plant life.

Once Unity Consciousness includes the planet, as well as your Multidimensional SELF, the format for personal and planetary ascension has been laid. Once you have progressed from perceiving your self as one human to an entire planet, you are ready to expand your world beyond your planet and into the Galaxy.

Earth, who has suffered extremes of polarity, has the greatest potential for entrance into higher octaves of expression or destruction. However, we the former residents of Earth, are combing our higher frequencies of consciousness to that of Gaia. It is the least we can do to assist Gaia who has offered a schoolroom for so many of our galactic family members.

In fact, a primary manner in which the ascending humans of Earth can assist the ascension of Gaia is to join into Unity Consciousness with their Galactic Family in the their fifth dimension and beyond. Once they have done so, they will gain immediate access to their Multidimensional SELF.

With the continual awareness of the Multidimensional SELF, any remaining polarities of Earth will disappear like all of the other third dimensional illusions. With all illusion gone from human consciousness, the reason for separation of form is easily erased.

We the members of your Galactic Family, who are also your Multidimensional SELF, are amazed at how much one human can accomplish alone. Hence, we have total confidence that your Unity Consciousness Gaia and together with all earthly life, including your human enemies, will be more than sufficient to ride the powerful energy field shift and into Gaia’s fifth dimensional SELF.

Sixth dimensional Beings usually prefer a formless state, but are willing to wear form if called upon to do so. When they do take a form, it is usually quite beautiful as they are “matrix makers” and enjoy creating loving and beautiful representatives of their Essence. Therefore, whereas Unity Consciousness is beings that appear to be wearing completely separate forms and/or separate forms that at connected by the visible surrounding ethers.

On the one hand, the forms of Collective Consciousness are temporary group commitments to the experience of creating a temporary form. However, outside of time, the term temporary has a different meaning. There are two types of form that sixth dimensionals take. One of these is the form of a matrix, which serves as the foundation for any given construct such as the Earth and/or the Mothership. The other is the form of a Collective Consciousness that appears as one great Cosmic Being, as these life forms are usually so large that they can only live in Outer Space. In both of these cases, temporary means that this form that will continue to evolve and shift.

Multidimensional Perception
Many of you, our ascending ones, have remembered how to simultaneously perceive more than one dimension, such as the third and fourth. You are called “psychic” because you have access to the fourth dimensional world while in your waking life and have Lucid Dreaming while asleep.  Hence, you can intermingle the two worlds.

Just as you close your eyes to go to the fourth dimensional dream world when you sleep, you will be able to focus only on the fifth dimension by closing your eyes to the lower density worlds. On the other hand, you can keep a consciousness portal open to the third/fourth dimensions in case your services are needed there.

This multidimensional process is much like voicemail on your telephone, or even the ring of the phone. However, this inter-dimensional phone is not an external device, but an internal monitor of your entire multidimensional reality. Until all of the third/fourth dimensions of Gaia are closed, you will likely constantly monitor what is remaining of the Shadow of Gaia in the lower dimensions to see if you are needed to assist others.

Many of you who are actively involved in the ascension process of Gaia will serve as Greeters on New Earth. You will all have the ability to either “take a vacation” from this role, or to simultaneously experience the higher realms of the fifth dimensional Gaia while, also, serving as a Greeter. In fact, once you have released the anchor of your third/fourth dimensional self, you will be able to carry more than one reality within your aware consciousness at all times.

Conversely, the beings of the sixth dimension enjoy the experience of creating the matrix upon which a form can be maintained. Obviously, matrix making is an innate ability within the lower states of consciousness in which forms can be created, however the building of the matrix is not the goal, and most of these matrixes are for personal expression.

The threshold world of New Earth will appear much like your present Earth except there will be only love, only unity and only peace. In fact, for many of you, ascending to New Earth will be much like having a wonderful dream where you can create everything you always wanted, but could not have.

We observe how our ascending ones move their consciousness in and out of these Islands by either maintaining Mastery over their energy field or by temporarily losing control of their energy field and fall out of New Earth. All reality is based on stages and degrees. You may have 10% of your consciousness calibrated to the fifth dimensional expression of Earth at one time, than meditate or do something that you love, and then suddenly you are 80% calibrated to the fifth dimension.

In the higher densities you do not leave a certain realty and then enter another, as all life is intermingled like drops of water in the ocean. Instead, you calibrate your consciousness to primarily experience one specific reality at a time. The “at a time” is an important statement because once you leave time in the fifth dimension and beyond you are no longer limited to one reality at a time.

Then, just as you can talk to a friend on the phone, make dinner, talk to your children and jot a note at the “same time,” you can live many realities within the NOW of the ONE. All of these realities of form will be experienced at once via your Unity Consciousness. Also, the fifth dimensional reality is NOT separate form the third/fourth. And, within any given life stream, each dimension of reality displays the same “story line,” but from a different frequency of reality.

In contrast to Unity Consciousness in which Beings gather to create a reality, the sixth dimensionals have NO concept of separation. Their formless states collects in order to create the matrix/foundation for a reality. These realities are “fleshed out” by the beings of the fifth dimension. Remember, ALL of you are multidimensional. Therefore, ALL of you exist in ALL dimensions simultaneously. However, you are not aware of these realities unless your consciousness is calibrated to that world.

Inter-dimensional Memories
However, perceiving and interacting with a reality is not the same. You can passively “look into” a higher dimensional reality while maintaining a lower dimensional form. Conversely, in order to interact with that reality, your entire Essence must be calibrated to the frequency of that reality.

To calibrate your entire form, you will need to release your attachment to your other expressions of SELF and Know that your Multidimensional SELF is the storehouse for all your genetic coding and frequency patterns. Then, using the power of your unconditional love, you can open the portal to a reality and create a form from the elements of that reality. Moving into a reality free of form after such a long sojourn into the physical world is an experience that is best waylaid until you have fully remembered your inter-dimensional skills.

For some of you, that memory will instantly pass into your consciousness because you have been remembering them while still holding a form. For others, who have long been disconnected from their multidimensional nature, it will be best to recover from your physical amnesia of your SELF before you venture into formless worlds.