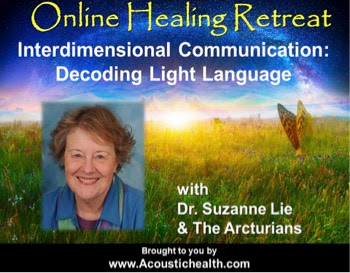 A Message from the Arcturians
Dear Ascending Ones,
When you stand on the threshold of the fifth dimension, you have feelings that you cannot remember having before. You will likely forget many of these messages if you do not document them. However, if you can realize that there is something different about your earthly consciousness, you will keep your heart and mind open to higher messages.

As many of you are realizing, there are more and more energy fields that are beginning to transmute from the third/fourth dimension, which is based on Time and Space, into the fifth Dimension which is based on HERE and NOW! There are three phases of this activation.

Phase ONE is to activate and maintain an:
Intention to perceive these messages.

Phase TWO is to find a way to:
Integrate these messages into your daily life.

Phase THREE is to:
Use these messages as guidance, and share them with others.

CREATE A "CAST IN STEEL" TIME AND PLACE TO TALK TO SELF
How is Light Language “talking with your SELF?”

As you realize that you are talking with your own Higher SELF  your “active intention” will greatly expand to assist you to “consciously activate your higher dimensional perceptions of reality, which includes your fifth dimensional communications that you receive via Light Language.”

We will NOW describe the manner in which “intention” and “Light Language” are the same.

1) Neither an intention, or a Light Language message, can be viewed by your physical perception.

2) Both your intentions, as well as Light Language, can only be sensed via your higher fourth and fifth dimensional perceptions.

3) Remember that both your intentions, as well the intention of the ONE, are most visible via your fifth dimensional perceptions.

4) Neither intention, nor Light Language, communicates via separate words. They both project out their messages from the consciousness of the “speaking one" as a mental picture and/or an emotional feeling.

On the other hand, if you are uncomfortable with the feel of the invisible message, you will feel drawn away from the source of that message.

The truth is that humanity speaks and hears Light Language a thousand times a day, but they are not aware of that fact because Light Language resonates to the frequency of fifth dimensional Gamma Waves.

Therefore, unless the recipient is able to consciously recognize, tune into, and accept gamma waves into their consciousness, they will NOT know that they are actually: Accepting, Reading, Interpreting, or Being Aware of the Light Language, or the Gamma Waves that delivered it.

We will now call in the Golden Ones now who will also assist your understanding more about Light Language.

We, the Golden Ones, are aware of the many Ascending Ones , who are waiting at the threshold of the fifth dimension, and are ready for the examination of their Multidimensional Auras. We are, also aware that everyone, as well as everything, in your transitional reality is in the process of transmutation into the next octave of reality.

Once a planet begins it’s process of transmutation into the next, higher frequency of wavelengths, the beings of Earth begin to “remember their innate Light Language." These wavelengths are NOT like radio or other man-made wavelengths.

These wavelengths are Light Wavelengths, which represent different frequencies of light that will begin to find their way into Gaia’s huge Planetary Aura. Yes, Gaia has an aura just like all Her living inhabitants have an aura.

Most of you have had many incarnations on Gaia during many of Her different frequencies of civilization. Therefore you have experienced:

Of course, these “visits” are occurring now, but most of humanity is only able to be aware of these visits in their night body while their physical body sleeps or while in deep meditation.

Fortunately, more and more humans have evolved enough to experience a state of consciousness in which they realize that if they harm Gaia, they harm their own reality—including their own physical body.

It is through Light Language between humans and the planet that Gaia can assist the humans to assist Her Planetary SELF. Of course, if humans assist Gaia they assist themselves, but many humans are so detached from their planet that they are NOT aware of that fact.

However, now that the core frequencies of Gaia are beginning their process of transmutation (expanding into a higher frequency of resonance), it will become increasing difficult for humanity to ignore that Gaia is a living being. This fact will be difficult for many as they cannot understand the concept of Light Language.

Most people are too attached to a language being documented on a paper or said via a verbal message. In other words, they can only believe what they perceive with their physical eyes and ears.

However, in order to perceive fifth dimensional light, which is the resonance of Light Language, they will need to experience the Light inside themselves. If one is born blind, they do NOT have an innate vision of their outer world. On the same hand, if one is born deaf, they do not have an innate sense of how the outer world sounds.

In the same manner, few humans were born with their innate Light Language activated.
Therefore, they will need to be convinced that:

In fact, before someone can actually use Light Language as a means of inter-personal communication, it is helpful if they can remember, and be aware, of their own communication with the Higher Beings that they pray to and/or meditate with.

Many humans are not aware that they have a “higher state of consciousness.” However, please remember that most humans use about 10% of their brain power. Therefore, ALL humans have the innate ability for inter-dimensional Light Language, but that ability is lost somewhere in an unused area of their brain.

Fortunately, if they want to recover that innate ability, they can begin by believing that they do, indeed, have that ability. How can you assist others to remember their innate abilities? That could be quite challenging.

However, if one can focus on their own “imagination,” which many people believe is NOT real, they can fool their daily consciousness into releasing it's habit of only attending to their LEFT BRAIN messages, and assist them to allow their RIGHT BRAIN to reveal the fun, creativity and illumination that their RIGHT BRAIN is ready to reveal.

How does one remember to allow the innate illumination and creativity that awaits to be expressed via their Right Brain? Please join us to find out, as well as to share with others what you have learned about this topic.

Blessings from The Arcturians, Suzanne Lie and Lauren Galey
CLICK HERE to purchase $97


Online Webinars with downloadable MP3Recordings
Posted by Suzanne Lie at 10:56 AM