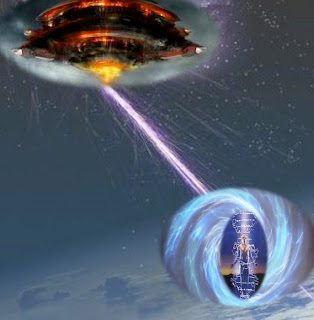 I have been called back to the Ship for debriefing. While I am there, I will also bi-locate to visit Mytria on our home world. I have informed Sandy and Jason that my presence will not appear as accessible, but I will still be able to communicate if they need me. It is time now for them to gather some independence in their spiritual awakening and for me to return to my greater expressions of SELF.

Maintaining my primary essence at this lower frequency of the fourth dimension of this reality is quite uncomfortable. Like Mytria, I have lowered my consciousness even more into my physical expressions. Yes, both Sandy and Jason are both my expressions because they are Divine Complements. Therefore, just as my Divine Complement Mytria and myself are ONE being, Sandy and Jason are ONE being. However, they are currently wearing two different bodies because they are polarized into their male and female expressions.

I am greatly missing Mytria, and she is missing me as well. We have, of course, been communicating beyond time/space, but we need to merge again. Therefore, I am returning to the Ship first for a debriefing with my beloved Arcturian mentor about my "time" on third/fourth dimensional Earth. Then, I will go to our ascending village on an ancient version of Pleiades to visit Mytria.

So far, I have primarily told my story in the past tense, but now I am shifting to the present tense as we (myself and whoever reads these messages) have come to the moment when Earth is on the threshold of Her own higher expression. Beyond the confines of Earth's 3D time our Pleiadian community is also on the threshold of ascending into the fifth dimension.

Moving into this higher dimension will free us from the constant threat of the Galactic War with the Service-to-SELF members of the Galaxy that is waging during that timeline. I am happy to say that at the time of this writing our once enemies, primarily the Draconians, are now our allies. However, this alliance occurred because we Pleiadians were able to ascend our community into a fifth dimensional state of consciousness.

Then, within that state of consciousness we could advance our society to the state of consciousness that we could be allies with the Arcturians, who have taught a great deal. Now, we Pleiadians are serving as guides for those incarnated on Gaia during your timeline. However, timelines are never static and infinitely in the process of construction and re-construction.

Mytria’s and my return to the timeline in which our home world was having great difficulty with ascension will prepare us to better assist Gaia. Furthermore, if we can ascend that version into the fifth dimension, it will also expand the frequency range of the Pleiades in your timeline.

In fact, Earth is the corner stone of a universal acceleration into the next octave of primary dimensional existence. You see every planet, galaxy and universe has a huge spectrum of operation. Also, all reality is multidimensional and simultaneously resonates to many frequencies within the NOW of the ONE. The evolution of any given universe is determined by the collective "primary dimensional existence," which is the dimension to which the greatest percentage of life-forms resonate.

Earth is the cornerstone because Her primary dimensional existence is still the third/fourth dimension. Also, Gaia is a planet on which members of myriad different planetary and galactic members have taken embodiment in the third and fourth dimensions of Her planetary form. Also, since so many galactic societies have "immigrated" to that world, they have been very involved in the evolution of Earth long after their galactic society left Earth.

We the Pleiadians, as well other galactic members came to Earth when we were younger societies. Because we were young, we made many mistakes and actually caused great damage to the Gaia and Her inhabitants. Hence we, as well as other galactic members, are assisting Gaia during Her time of ascension. We can do so now because we have ascended our primary state of consciousness into the fifth dimension and beyond. The Arcturians are our mentors, as it is their "cosmic specialty" to assist people and planets on the verge of ascension.

I have a greater understanding of the third-dimensional mind from working with Sandy and Jason. Therefore, I have great sympathy for the amount of confusion you may have about what I have just shared with you. Therefore, I will take moment to talk with you about the concept of infinity. Infinity is difficult to explain, as it is beyond all third-dimensional mental constructs. Hence, I will need to speak in metaphors. In fact, learning imagistic language is a huge component of learning to translate higher dimensional Light Language into third dimensional language.

Infinity is similar to a huge circle that has no beginning and no ending. Therefore, this circle always was and will always be. Infinity is not bound by any third dimensional constructs such as time, space, polarity or limitation. Infinity IS! Infinity is not to be understood, especially via third dimensional thinking. Instead, it is to be accepted and felt. Yes, you can actually feel infinity within your higher states of consciousness, but it is not a feeling that can be expressed by the language of the physical world. It can only be felt, and can only be felt once you accept it.

Within this circle of infinity are countless smaller circles that represent all forms of life that is manifested in the realities in which there is form. In the lower frequency circles, the form is static and often polarized, as with Earth. Conversely, in the higher frequency realities the forms are shifting into different expressions in different frequencies and dimensions. In third/fourth dimensional worlds such as Earth there is time, and travel through space takes time to complete.

In higher frequency worlds time is not sequential as on 3D Earth. Time is mutable and serves more as an address or location of a given reality rather than an actual experience. In other words, I say that my Pleiadian world was long, long ago in relation to your present world. However, once we ascended our community into the timeless fifth dimension, we were beyond time and live in the NOW.

When I visit Mytria, she is in a reality on the cusp of releasing time, just as Earth is on the cusp of releasing time. As we blend our ascensions, even though according to your 3D time our ascension occurred long ago, we can remember and review what was learned during our Pleiadian ascension to better assist Gaia. However, please remember that we Pleiadians, along with the Arcturians and other members of our Galactic Family have been assisting Earth for millions of years.

Also, since our society is free of time we can assist Gaia a million years ago and also assist Her in your NOW. We do this by entering the circle of infinity to find the appropriate "time address" to enter either, or both, timelines of Earth. We are also able to use the circle of infinity to enter the timeline of the Pleiadian ascension. We enter this infinitely spinning circle by setting our intention on the FEEL of the era that we wish to experience. Then we allow that FEEL to connect us to the time/space of that location.

Do not be concerned if you are still confused by my message, as we have been traveling through time since we became fifth dimensional. Fortunately, as you remember your true SELF who is wearing your earth vessel, you will clearly understand what I am saying. You will understand it because you will remember the adventures of your Multidimensional SELF. Thus, you own higher dimensional SELF will remind your time-bound third-dimensional self of what you already know.

So, how do I return to the Ship? I merely switch channels in the holographic projector of my brain. I have expanded my consciousness into the third/fourth dimension so that my mind patterns can resonate to the fourth-dimensional container that is shared by one of my expressions of SELF, Jason or Sandy, who are wearing physical earth vessels.
To return to the Ship I simply expand my consciousness back into the fifth dimension and beyond so that I can upload my mind patterns back into the vessel that awaits me on the Ship in the meditation cubicle.

My reality of assisting Sandy and Jason still exists, but I am "logging out" of that time/space and returning to a higher frequency of my Multidimensional SELF. Within that expression of my SELF, I will be free of my lower states of consciousness. Thus, I will be able to merge more completely with both the Arcturian and Mytria. Furthermore, Jason and Sandy will have time to digest what I have taught them.

Therefore, I leave the 3D reality on pause to be experienced from the perspective of those who believe that their world is "real." Meanwhile, I will return my dominant state of consciousness to my Multidimensional SELF on the Starship. I do no go anywhere. I am merely changing channels. When you change channels on your television the other channels do not disappear. They are still there, but you are not attending to them. Thus they are not a part of your reality.

If you had a very sophisticated television and a very large screen you could watch all the channels at once. However, you would need your multidimensional consciousness to be able to simultaneously perceive and interact with more than one channel/reality within the same NOW. Once you return to the fifth dimensional resonance of your Multidimensional SELF, you will gradually remember how to maintain constant contact with more than one of your myriad realities.

I am returning to the Ship NOW and will continue my communications from there. I am sure that my visit with the Arcturians will assist me to activate old memory files that have become dimed from my long stretch in the time and space of 3D Earth. Also, my reunion with Mytria will open my heart and replenish my Soul.
Mytre

PLEASE SEE COMMENTS FOR DETAILS
Posted by Suzanne Lie at 11:12 AM