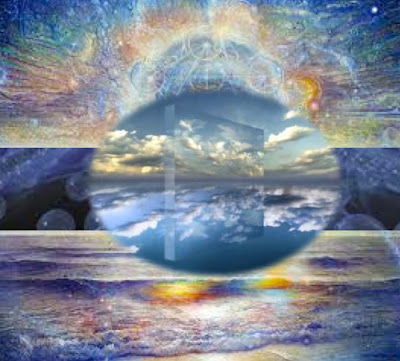 MYTRE SPEAKS:
As my pure consciousness moved through the atmosphere of Earth, I pondered my stay within the aura of a human on ascending Earth. Usually, the shift of consciousness is instant, but I have grown rather attached to the freedom from all form. Now that I am no longer in the aura of another, I can more deeply experience the essence of my own soul.

I feel Mytria as if she were next to, or within, me. My consciousness greatly expanded by the experience of feeling her, my completeness of SELF, so close to me while we were on the ship together. Hence, I have greatly missed her since we parted.

Instead of setting my intention on the meditation room of the Ship, I have decided to allow my intentions to wander across the many faces of Gaia’s Earth. Earth is such a diverse planet with myriad varieties of life. As I perceive Earth from this perspective of her atmosphere my fifth-dimensional consciousness can perceive many flashes of higher frequency light entering the aura of the planet, as well all Gaia’s inhabitants.

Fortunately, all the plants and animals are completely open to this new frequency of light and are living in surrender to the changes in their form and expanded states of consciousness. Animals that once lived as prey and predator are coming into the alignment of peaceful co-existence. Also, plants are transmuting into higher expressions. It is too bad that so many humans do not follow the lead of Gaia’s plant and animal kingdom.

However, as I observe the energy patterns on Earth, I can see increasing areas where unity consciousness creates a cohesive and flowing pattern of inter-twining light. On the other hand, there are still areas where the light patterns strike at each other at angles and squares. These are areas that are still resisting the higher light and tenaciously holding on to that which is ending.

In the areas of cohesive light I can see patterns of light that resonate to the higher spectrum colors and ever-expanding patterns. I can also see how these areas are emitting a cloud of consciousness that is slowly escalating through the fourth dimension and into the fifth. Hence, the face of Gaia’s orb is a tapestry of harmony, unity, expansion and transcendence, as well as patches of resistance, restriction and destruction. And so polarity closes bit-by-bit.

I wonder if our Pleiadian village in what to this NOW is an ancient timeline also appeared that way to a higher dimension perspective. With that thought, I feel myself blink away form Earth. This bi-location must be much like Mytria’s when she left the lower frequencies of Earth. We are both living three realities within the NOW. We were on the ship in our mediation chamber, in the atmosphere of three-dimensional Earth and focusing on our ancient home in the Pleiades.

Because of Mytria’s experience I know to direct my consciousness toward the FEEL of Mytria’s being. In that manner, I have a direct entry point into that Pleiadian reality. Then, in a flash, my consciousness is hovering over our wilderness camp. This time my viewpoint is much closer to the planet, and I can see the actual structures and people. It appears that many of the people are hurriedly preparing for something.

It looks as though our small entourage has gotten reinforcements from the Village. In fact, it may even be that most of the villagers are now in our small camp. However, even though the scene of our campsite and the people is clear, the Violet Temple is slightly out of phase with the rest of that scene. In fact, the Temple seems to be phasing in out of the frequency field of the Village, but I can feel that Mytria and Almon are inside of the Temple.

I must find a way to match the frequency of the Temple’s energy field so that I can communicate with them. I focus my attention solely on the Temple and set my intention to entering into that version of reality. I remember when I first entered the reality of Earth circa 2013 to assist Sandy and Jason I had to focus first on Jason. Since he is a lower expression of my Multidimensional SELF I could use his energy patterns as a homing point for my consciousness. Once I placed my intention on joining my consciousness with his I was able to join that reality.

Fortunately, dear Mytria also feels my consciousness and is trying to communicate with me. However, our conversation is much like an Earth cell phone that has poor reception. I can only understand parts of her message, and the communication goes blank. I will send a repeating message to Mytria and Almon so that they can eventually piece it all together. But, what do I want to say?

I know! I will have them focus on my resonance, which is quite stable and resonating to the threshold of the fifth dimension. As I center my attention on the Temple and hold my consciousness at the frequency of the threshold to the fifth dimension, I begin to get more information about the Temple. In fact, I have the impression that the actual Temple is communicating with me in the form of pictures entering my mind.

It appears that at the exact moment in which the Temple was fully grounded on the face of our planet it sent out a spectrum of myriad possible realities. With the rising of the Violet Temple, our campsite, the village and everything within its protective dome the Arcturians have given us became fifth dimensional. Hence, every thought and emotion of every member of our settlement was instantly manifest.

The members of our camp were united in consciousness. However, the villagers had not all entered unity consciousness. Therefore, the myriad different versions of reality of the different individuals and small groups all created their own version of our ascended community. Since there was not a unity of thoughts and emotions, the many versions of ascension split into myriad realities.

I communicated this vision to Mytria and Almon within the vacillating Temple and they agreed. But none of us knew how to unit all the members of the campsite and the village. Mytria and Almon decided that they would focus on stabilizing the Temple by filling it with unconditional love, which made me realize that they had the answer for the entire village.

If our entire village could synchronize themselves with the frequency of unconditional love we would have enough unity consciousness to stabilize into a cohesive realty. I would need to start by telling the members of our camp, but first I would need to create a form that I could wear on this world.

I realized that Mytria had created a form for herself, but with the assistance of Almon. If I entered the Temple to have Mytria and Almon assist me to create a form, I may not be able to leave that wavering resonance. No, I would have to create the form myself. I could always ask the Arcturian for help, as It was not confined to any sense of time or space.

However, I decided to start on my own and see how that went first. As I relaxed my mind and focused my feelings on unconditional love I could feel the fifth dimensional Elementals offering to assist me in creating a form for my consciousness. Since my consciousness was fifth dimensional the Elementals could assist me by creating a matrix for my Lightbody.

I focused on the ever-present Arcturian within me, which was unique. I had experienced being inside of the Arcturian, but I had never experienced the Arcturian inside of me. “Is there a difference?” I heard the Arcturian ask. With a smile, I welcomed the return of my higher expression Arcturian nature in the core of my SELF. In a flash I dawned a brilliant Lightbody and floated down to the ground.

All the hustle and bustle instantly stopped as everyone’s eyes turned towards my body of light. Some of them moved away in fear and distrust, but most of the people turned towards me and walked in my direction.

I knew that my first challenge would be to create unity consciousness, so I set my attention on those who were frightened by my sudden appearance. I discovered that my “voice” was telepathic, so I could direct it to those who had moved to  the outer rim of our gathering.

“I am just Mytre,” I said in a loving manner. “I served as a Protector in our village, and piloted the ship that sought the Arcturian’s assistance. I have learned much while I have been away, but am still a member of our community. The body that I wear is similar to the body that you wear, but you don’t believe that, so you cannot perceive yourself in that way.”

“Listen to me, all of you. You were successful! Your resonance is now of the fifth dimension. Now you are safe as you are all invisible to the forces of power-over who have long been our enemy. We need to unite our consciousness now to stabilize your ascension.”

“Is anyone left in the village?” I asked.

“Yes,” my old friend Jackal replied. “Would you like us to go get them?”

“Please do. We need to all be in unity in order to fully ground the Violet Temple to this frequency of reality.”

I then took him aside and told him to bring food and supplies, as we may all need to camp here for a while. Make sure you take at least two days so that I have a chance to bring unity to this group. Take two of your most trusted friends with you. The three of you will be in charge of creating unity within the villagers that will be joining us.

“Remember, no one is too young or too old. Every one of us must be called up to join together to stabilize the Violet Temple and to synchronize with our true fifth dimensional resonance. If I join you later, do not be shocked. The Arcturians have taught me bi-location, so I can beam to be with you instantly.”

Jackal knew where I had been and what I had learned. Therefore, he was not too shocked by what I was saying.

“I will do all that you ask and see you here in two days,” He said before he turned to leave. I watched as he chose one man and one woman to join him on his mission. They both waved in my direction and looked pleased to have been chosen. I knew that Jackal would fully brief them on the way back to the village.

I looked around at the group of newly ascended ones, who had no idea they had actually ascended. Therefore, they were in-between worlds. I knew that many of them, especially those from the village, did not understand all that I had said to them.  But, I could feel that they welcomed a leader bringing cohesiveness to their group.

PLEASE SEE COMMENTS FOR DETAILS
Posted by Suzanne Lie at 7:45 AM